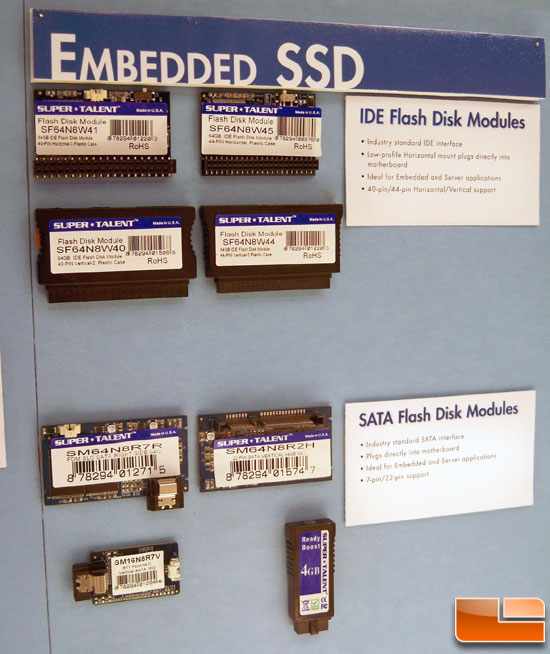 While at CES 2011 we stopped by the booth of Super Talent to check out what they had on display. Super Talent had all sorts of useful new USB 3.0 and Sold-state drive based products for the coming year. Read on to see some of the new products you’ll be seeing from Super Talent! You might just be surprised by what you see!

Mad Catz is well known for their gaming hardware and they had some really great things to show us at their private suite during CES 2011. The two products that we focused on were the MIDI PRO-Adapter and their gaming lights using AmBx technology which Alex gave us an overview and we recorded some video so you can have a virtual tour as well. 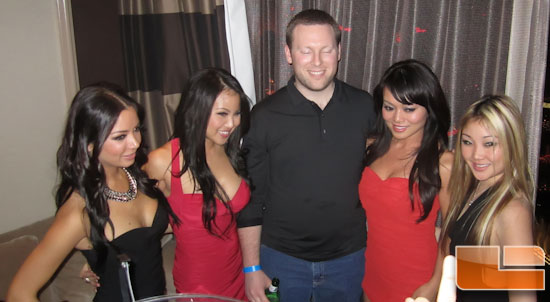 One of the perks of CES, or any trade show for that matter, is the presence of multitudes of enthralling women stationed at booths to be the shiny gem that catches our eye and draws us over. It’s a proven ploy that rarely fails to work as intended and we did our part to digitally capture as many as we could for your viewing pleasure.

At CES 2011, DisplayPort is demonstrating the latest products that expand how DisplayPort delivers their technology. We DisplayPort over fiber, ethernet, DVI, VGA, USB, and even HDMI. Also very interesting was watching DisplayPort’s wireless implementation called WHDI. Read on to see what all we got a chance to see at CES 2011!

Sapphire has just announced that for the very first time it will introduce Intel based mainboards in the high-end sector. This might come as a shock to many, but back in June 2010 news broke that several key EVGA motherboard team members left and headed over to Sapphire. Read on to see the Sapphire Pure Black motherboard series that has boards for P67 and X58 chipsets!

At CES 2011 we stopped by the Wynn Hotel to visit with EVGA and one video card really caught out attention. The dual-slot video card was 11-inches long and was clearly packing the power of two GPU’s. EVGA would only let is know that it’s an early prototype of an upcoming video card that they have not released. Read on to see some images and even a quick video clip of this new video card!

Razer always has new and interesting products for CES and for 2011 it’s no different. The biggest news is the announcement of an OLED mobile gaming keyboard called the Switchblade! There are a number of new products so check out what Razer has been cooking up for gamers.

Corsair recently held their CES Press Conference at the V Bar in Las Vegas Nevada during the Consumer Electronics Show (CES) of 2011. Legit Reviews was fortunate enough to be among the press who were invited! There was quite a bit of eye candy and technology to keep the press occupied while we waited for the conference to begin. You, our readers, are fortunate enough that you will not have to wait among the company of the lovely women of Corsair and of the V Bar! You can have the highlights with out the wait!

Looking for the ultimate super phone? Has Motorola got a solution for you! Combine the latest and greatest in mobile technology like the Atrix 4G, throw in a netbook type mount. Just for good measure go ahead and throw in the ability to interface with a full sized keyboard and mouse, as well as a PC monitor. Stir it all up and you get what will be one of the most wanted gadgets of 2011.

OCZ has been on the forefront of both consumer and enterprise SSD market for some time now and there aren’t any signs that they are slowing up anytime soon. We had the pleasure of getting some one on one time with OCZ and getting a preview of their Vertex 3 line along with new ZX modular power supplies that should satisfy even the most power hungry user.

Wicked Audio has some, well, wicked looking headphones on display at CES and Legit Reviews was there to give them a look as part of our continuing coverage of CES 2011. These are brand spankin’ new and will be available very soon. Get the info as we get a product tour from lovely Kristen on the CES show floor.

Day one of CES 2011 is now officially underway even though there has already been plenty of news for all the tech junkies out there. Check out the latest routers and home networking components from NETGEAR as home networks and wireless routers are now almost a necessity for the connected world.

Intel has opened up a whole new world of possibilities with this weeks launch of Sandy Bridge. Intel has been working with all sorts of companies in the industry to build an enormous ecosystem of media and processing applications, all designed to enhance you’re computing experience. Check out this article to see a number of demonstrations of Sandy Bridge’s future capabilities!

There were a lot of technology companies at the Digital Experience event and while there, we were able to check in with IOGEAR to see some of their new HTPC keyboards and HD/3D media streamer device. Check out the video for the overview as shown by IOGEAR and a small preview of some of the “booth babes” we saw.

NVIDIA and LG have teamed up to build the next generation of smart phones now being called ‘super phones’. The LG Optimus 2X is being launched now with NVIDIA Tegra 2 1GHz dual-core processor. This makes the Optimus 2X the new performance king of smart phones. You can even check out the CEO of NVIDIA play a round of Angry Birds during their press conference!