The DX11 video card battle between NVIDIA and AMD has been getting pretty good in recent months. NVIDIA is getting ready to phase out the GeForce 400 series and has started to trickle out GeForce 500 series cards. The next rumored launch is going to be a video card that might be called the GeForce GTX 560. Pretty much all of the rumors that are on the web are talking about the GTX 560 being a very powerful mainstream single-GPU gaming graphics cards that is going to replace the GeForce GTX 460 that is currently on the market. AMD has publicly announced that they have a Radeon HD 6990 (code-named Antilles) dual-GPU video card in development that is the sequel to the Radeon HD 5970. 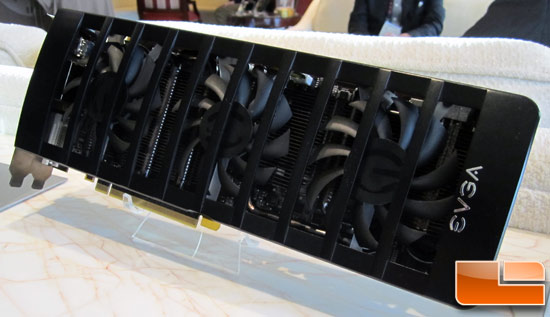 It doesn’t sound like NVIDIA is going to down without a fight though as they are rumored to be bringing back a dual-GPU video card now that the GF100 core has ended and the fixed improved GF110 has been released. We have heard rumors that NVIDIA is going to be releasing a GTX595 or GTX590 video card, but who knows if there is any truth to that.  In fact we even heard people at CES saying that NVIDIA would be bringing back the Ti nomenclature for their cards.  That brings back memories of the GeForce4 Ti 4200 days, but would NVIDIA really bring out a new naming system in the middle of a product stack after some cards have already been released? At CES 2011 we stopped by the Wynn Hotel to visit with EVGA and one video card really caught out attention.  The dual-slot video card was 11-inches long and was clearly packing the power of two GPU’s. EVGA would only let is know that it’s an early prototype of an upcoming video card that they have not released. 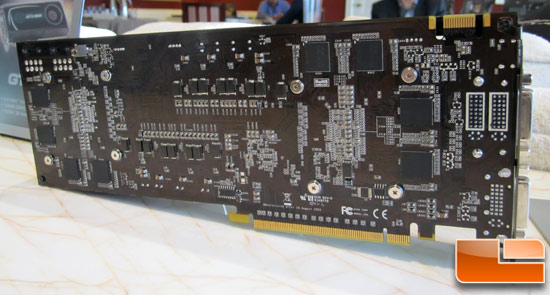 They also let us know that the card had 2GB of GDDR5 memory on it that was evenly split between each of the GPUs.  This means that each core gets a dedicated 1GB of memory. The card obviously has an SLI interconnect on it, so it looks like quad-sli is about to come back!  This will be great news for enthusiasts and benchmarking nuts as these will be popular cards to overclock and pound on.

Looking at the I/O panel we can see three DVI ports and a single HDMI header.  Since the DVI ports are colored different it could mean that some are dual-link or single-link.  Notice that the black metal heat sink cover sticks past the dual-slot bracket meaning that this card is fairly wide and if you wanted to run a pair of them you might have an issue on some motherboards. 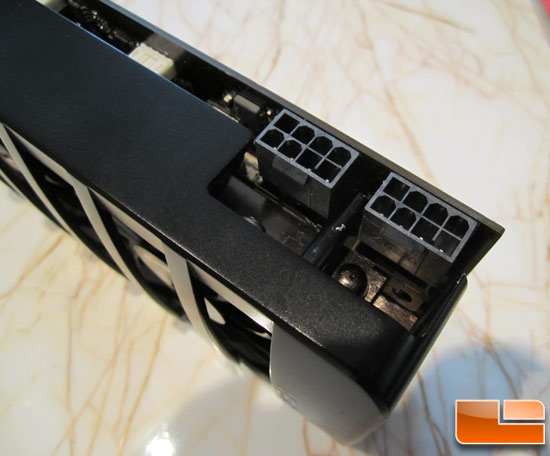 When it comes to power connectors the card has two 8-pin PCIe power connectors, so it uses a fair amount of power. A motherboard PCI Express slot can deliver up to 75 Watts and then a regular 6-pin PCI Express power cable is rated at an extremely conservative 75 watts. An 8-pin connection is able to provide up to 150W of power. That means this card should draw under 375W of power, which isn’t really that bad for a dual-gpu solution, but then again we aren’t 100% certain what GPU’s are on this card.

We’ll leave you with a quick video that EVGA let us shoot on this new board. They didn’t say much, so it’s only a minute long!