Intel: Did Someone Say Sandy Bridge? 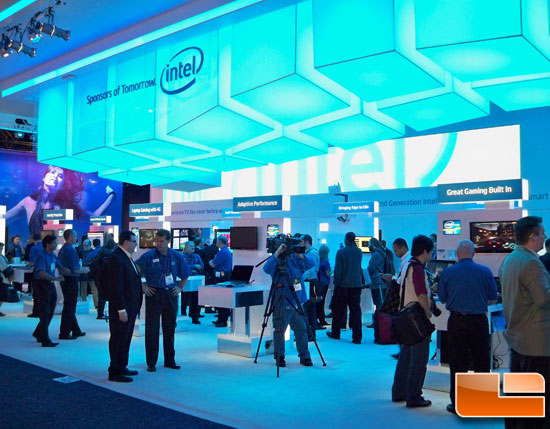 It’s a tough race to call but amidst all of the tablet launches Sandy Bridge is THE darling of the show at CES 2011. Just in case you missed it , we had three Sandy Bridge launch articles and the general consensus was that it kicked ass! Many companies see it as a game changer, with others seeing it as the key to unlocking content that many consumers have been clamoring for. We only scratched the surface in our reviews of why Sandy Bridge is seen as a game changer. We already know that Sandy Bridge is a monster performer, with the Core i7 2600K being untouchable by any other CPU below the $1000 Core i7 980X, and in instances with low thread counts it has no equal. Leveraging the technology inside Sandy Bridge, particularly AVX, is going to a huge step up in performance for applications and processing.

Intel has a large part of their business riding on the success of Sandy Bridge. They are forecasting SB to be 1/3 of their shipping product for 2011. Many of us know that PC’s have gone from a luxury to a necessity, there are 1 million PC’s sold world wide every day!

It used to be that you bought a new computer because the content you were using needed better hardware to perform. Long gone are the days of processor speed bump after speed bump as most PC’s are sufficiently powerful to run the applications we need them to. Today’s PC must be able to deliver an experience and handle many different kinds of media, be it social or art. One of the design mantras behind Sandy Bridge was “performance not for the sake of performance, but performance for the sake of experience.”

One such application that we found to be “freaking neat” was the Intel Lego Builder. Using a camera, projector, and some Legos, we were treated with one of the coolest things we’ve seen at the show. Don’t just take our word for it, check out the video for yourself.

As you can see, the camera does real-time image and spatial recognition to drive the projector display. All of the calculations are done on the Intel Sandy Bridge processor utilizing the new AVX extensions, as well as Turbo Boost 2.0 when needed. Intel plans to develop other applications using this real-time spatial recognition and enable many new types of interactive environments.

You can see another such application in action in this video. We didn’t get the name of the software but this shows off the power of Sandy Bridge and AVX as Mooly Eden of Intel has a conversation with “himself.” Notice that the avatar recognizes facial movements in real time and how seamless it all is. Very cool stuff!

Let’s see what else Intel has cooked up with Sandy Bridge!