Sapphire has just announced that for the very first time it will introduce Intel based mainboards in the high-end sector. This might come as a shock to many, but back in June 2010 news broke that several key EVGA motherboard team members left and headed over to Sapphire. With AMD Fusion motherboards coming out and Sapphire wanting to enter the high-end enthusiast motherboard market this makes perfect sense.

Sapphire will be bringing two motherboards to market. The first one will be the Pure Black X58 and the second will be the Pure Black P67 Hydra. We are going to start with the Sapphire Pure Black P67 Hydra motherboard as this is the motherboard for the new Intel Sandy Bridge processor that was announced last week. This board stands out from the crowd as it uses the Lucid Hydra chip to allow a mix of mutli-GPU graphics configurations to be used in its PCI-Express slots. As you can see from the image above the board has four PCIe x16 slots and two legacy PCI slots. It’s interesting that they removed the IDE and floppy drive connections, but kept the two PCI lanes.

The board has a black PCB design and has six internal right angle SATA headers and one straight SATA header along the bottom edge of the board.

Here is a shot of the rear I/O panel that shows off the connections you can have here. There is a total of 10 USB ports, two of which (blue) are Super Speed
USB 3.0 while the other eight are USB 2.0. There is a single RJ45, Firewire, eSATA, optical out and combo mouse port on the board. 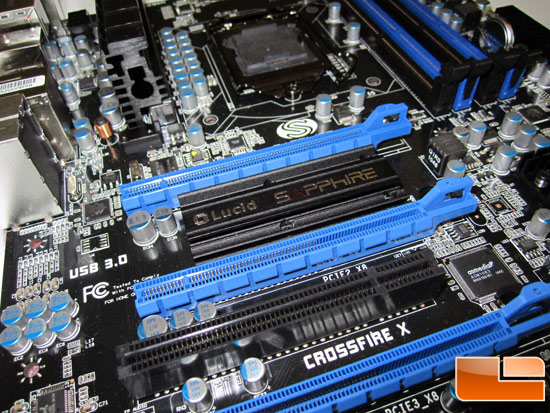 The board has Lucid Hyrda on board as it sounded like it would be impossible for Sapphire to get an NVIDIA SLI license from NVIDIA since they don’t make NVIDIA branded GPU’s and have been doing just AMD products for a number  of years. This solution is nice though as you can still run multiple graphics cards and take advantage of Intel Quick Sync Video technology when running discrete graphics.  The Lucid Hydra chip is under the black heat spreader between the primary and secondary PCIe x16 slots. 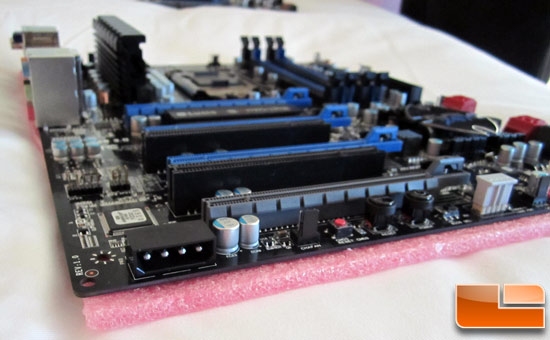 Since the board has four PCIe slots additional power was needed to feed the slots if you are going to populate all of them with video cards.  The Sapphire board designers place this right angle 4-pin molex connector along the bottom edge of the board to solve the issue.  If you have a top mounted power supply that is old you might have some issues routing a cable down to here and then making the turn to plug it in.  Those with power supplies at the bottom of the case shouldn’t have an issue here at all. 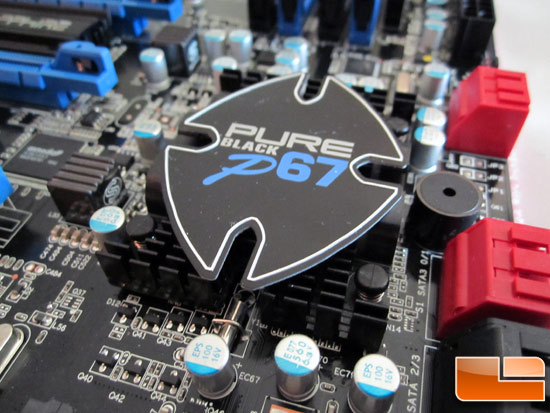 A small black passive heat sink covers the Intel P67 Express chipset and is covered by a ‘shield’ that has the name of the motherboard.  This looks cool, but one would think that the name plate would block airflow and cause the chipset to run hot.  We are guess that no fans could have been used since video cards wouldn’t be able to be installed. 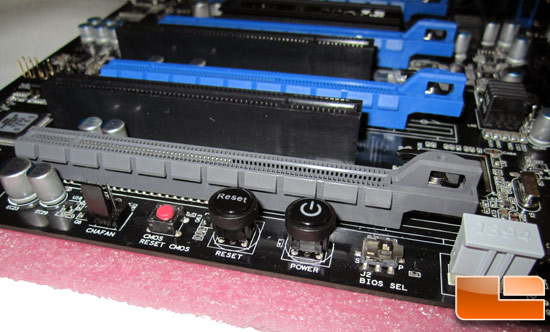 Along the very bottom edge of the board you have a power, reset and CMOS reset bunttons that are nice for those that are working on an open test bench or do a ton of overclocking.  You can also make out the BIOS selector/jumper as the board has a backup recovery BIOS available in the event that one gets corrupted.

Sapphire expects this board to come to market next month after the Chinese New Year.