Since video card temperatures and the heat generated by
next-generation cards have become an area of concern among enthusiasts
and gamers, we want to take a closer look at how the NVIDIA GeForce GTX 460 1GB graphics card does
at idle and under a full load. 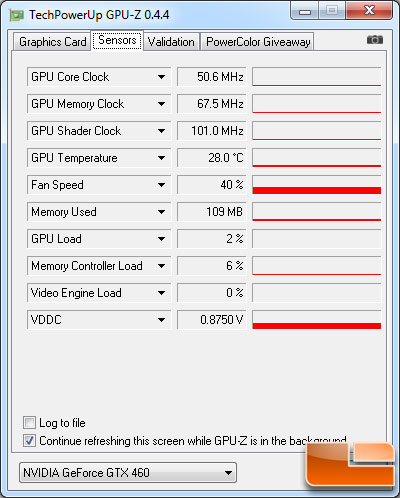 At idle on an open test bench the NVIDIA GeForce GTX 4601GB has some very impressive temperature numbers, which is amazing for a reference card with budget friendly cooling! We were seeing right around 28C (82.4F) at idle it a room that was pushing 77F since it is summer. As you can see from the screen shot above, the idle state
of the NVIDIA GeForce GTX 460 drops the GPU core clock frequency down to 50.6MHz and the
memory clock down to 67.5MHz to help conserve power and lower
temperatures. The fan spins at 40% rotation speed when at idle and is very quiet. 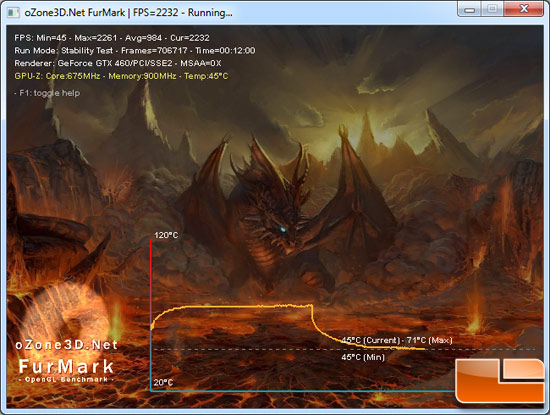 We fired up FurMark and ran the stability at 640×480, which was
enough to put the GPU at 100% load in order to get the highest load
temperature possible. This application also charts the temperature
results so you can see how the temperature rises and levels off, which
is very nice. The fan on the NVIDIA GeForce GTX 460 1GB video card was left on auto during temperature testing and the fan speed is
dynamic. This means that it will increase/decrease depending on the GPU
temp and GPU load. When we hit the space bar to stop the rendering the temperature dropped. The peak temperature reported on the open air test bench was 71C! This is a very good temperature to observe on the open test bench like this and with stock cooling! The GeForce GTX 460 is a very temperature friendly card unlike the GTX470 and GTX480 as they can push 100C at full load with just a single monitor plugged in! The GeForce GTX 460 is nothing like that and during casual gaming in a PC case we would hit between 55-65C, which is perfectly fine.