One thing about Overclocking is that it varies greatly from one system to the next, even using the exact same components, you can still get significantly different results.  We have overclocked this CPU several times in the past and the maximum we have been able to get a stable overclock is 4.7GHz, at 4.8GHz we would get the BSOD or random lock-ups.  So 4.7GHz is our known overclock cap with this hardware.  This was done simply by increasing the CPU Multiplier within the BIOS slowly, then increasing the voltage until we were unable to go any further without a high probability of damage to the system components. 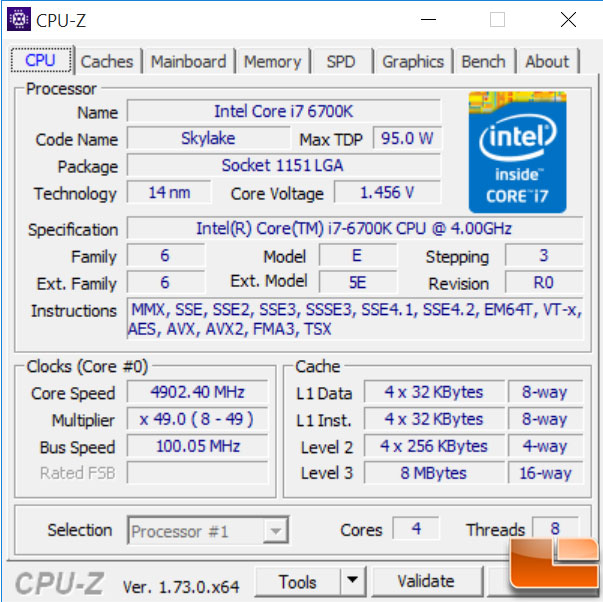 With the ASRock Z170 OC Formula, we were able to blow past the 4.7GHz limit up to 4.9GHz!  This took increasing the voltage to 1.43V, which is still a comfortable (although high) voltage.  We hoped to get a 5.0GHz out of the system, however it was highly unstable.  A 22.5% boost in CPU clock speed for quick and simple overclock isn’t bad at all.  As we get to testing, we’ll see whether this translates into a significant performance boost.  However, if you are going to be using your system mainly for gaming, we  have seen very little game performance boost when overclocking.  Games are seemingly GPU limited rather than CPU limited with the i7-6700K.

Using the built-in Optimized CPU OC Setting, we were able to overclock the CPU to 4.8GHz with a single click of the mouse.  This pre-configured overclock feature isn’t a new item on motherboards and is not unique to ASRock Z170 OC Formula, I was surprised that they provided four different pre-configured OC settings, all of which were extremely easy to use.

Even overclocking the memory is made easy.  Within the DRAM Configuration one of the options is the DRAM Frequency, this pops up a new window that has DDR4 clock speeds starting at 800, going up to 4133MHz!  Without any other adjustments, the Kingston Fury DDR4 kit went to 2933MHz, a 10% boost in memory clock speeds.  Going to 3000MHz the system was unbootable and we had to use the BIOS reset button to go back into the BIOS to make adjustments.