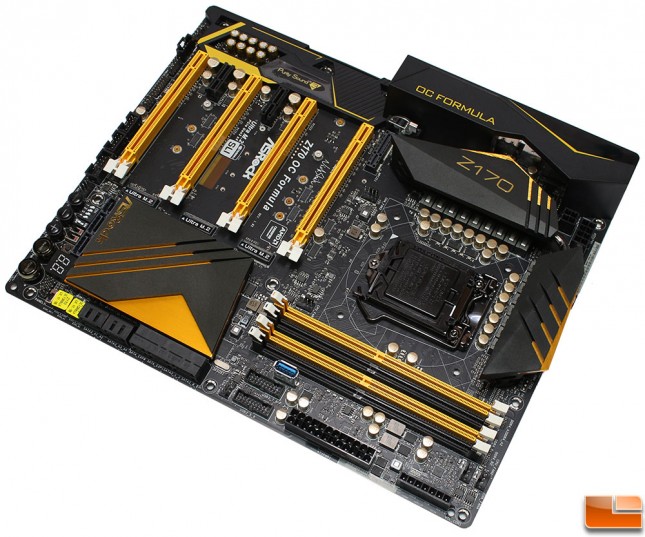 Like most motherboard manufacturers, ASRock has an impressive line-up of new motherboards that support many of the various features of the latest Intel Z170 chipset. ASRock has over 17 Z170 motherboards geared towards different types of users. They sent over their Z170 OC Formula, which as the name implies is designed for overclocking. In fact, one of the worlds top overclockers partnered with ASRock to perfect the Z170 OC Formula, Nick Shih. With Nick’s knowledge of overclocking, the Z170 OC Formula immediately began setting records for overclocking when it made it’s debut at the Intel Developers Forum 2015; actually the ASRock Z170 OC Formula was the only Z170 based motherboard to be featured at the IDF 2015! Let’s take a quick look at a few things that this motherboard has to offer before we get to the technical aspects and taking a look at what ASRock and Nick Shih has put together for us. If you are wanting to get the ASRock Z170 OC Formula motherboard for yourself, you can pick it up now at various online etailers for around $252.99 plus shipping.

As we take a look at the motherboard, a few things to be aware of is that on the ASRock Z170 OC Formula features several extra large aluminum alloy heatsinks designed to pull heat away from the MOSFET and chipset. The 60A Power Chokes utilized on the motherboard should improve the power going to the motherboards components. The capacitors are a combination of 820uF and 100uF 12K Platinum Nichicon’s, which are designed with a longer lifespan, along with providing superior stability. Another quick feature for overclockers that might be overlooked is the Hyper BCLK Engine, this allows for a very fine tune of the clock, letting overclockers squeeze every ounce of speed possible. 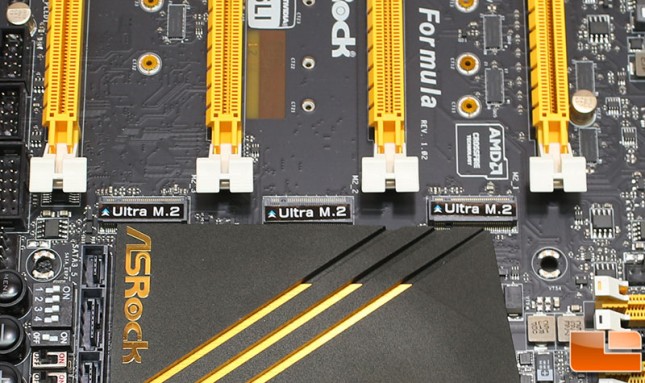 Nestled between the four PCIe x16 slots is three Ultra M.2 slots which are capable of up to 32Gb/s bandwidth with the right PCIe M.2 card, or 6Gb/s if you have a SATA based M.2 card. Another option is to utilize ASRocks U.2 kit to connect the latest U.2 PCIe Gen3 x5 SSD’s. The varioud M.2 slots share bandwidth with the onboard SATA and SATA Express ports, so you’ll want to make sure you know how many drives of each you want to utilize. With three M.2 slots, you should be able to set up a very nice M.2 RAID.

The speed of the memory that a motherboard supports is a big part of overclocking and getting the most out of the system. The Z170 OC Formula supports 4x 16GB DDR4 modules, for a total of 64GB of memory. Utilizing the dual channel memory, itll run at 2133MHz prior to enabling overclocking, at which time itll run all the way up to 4400MHz in dual channel mode. If you only want to run one memory module, you can take it up over 4500+MHz! Like most motherboards, itll support the Intel Extreme Memory Profiles (XMP) 2.0.

We have already discussed a large number of features on the Z170 OC Formula, however that is not all that has to offer. We’ll take a closer look at some of the other features while we are looking over the motherboard. 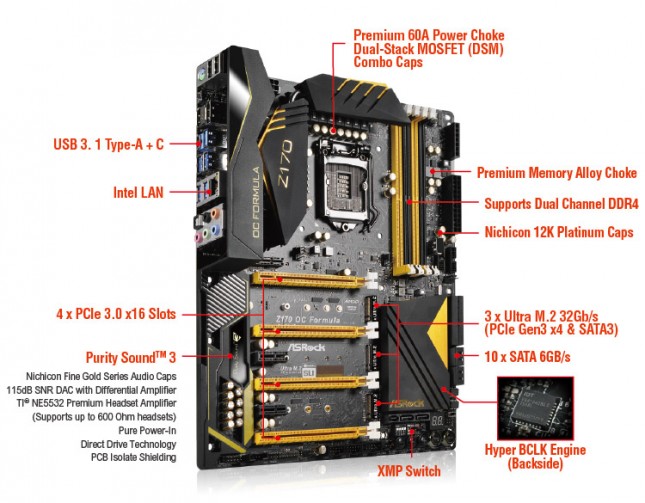 With the technical information out of the way, let’s take a look at the retail packaging of the ASRock Z170 OC Formula motherboard, before taking a close look at it’s layout and running benchmarks.