Like Futuremark’s other major benchmark, 3DMark, PCMark 8 has multiple benchmarks that gauge performance on varying levels of workload.  We will take a look at the Home Accelerated benchmark, which Futuremark says it reflects common tasks that a typical home user might experience.  These include photo editing, typing, web browsing, video chat, and casual gaming.  Each of the components of the Home Accelerated test is broken out, and then combined to provide an overall PCMark 8 score for the system. 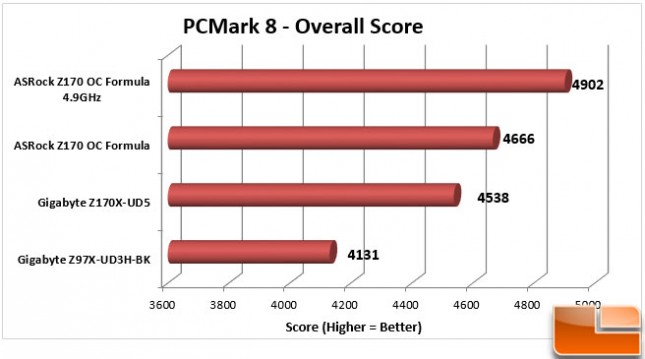 Legit Bottom Line:  Nearly a 3% performance difference between the two Z170 motherboards at base clock speeds.  Plus an additional 5% boost once we overclocked the CPU.  Not as big of a boost in performance compared to the other tests, but still a worthwhile note as it only took a few button clicks in the BIOS to get that 5%.