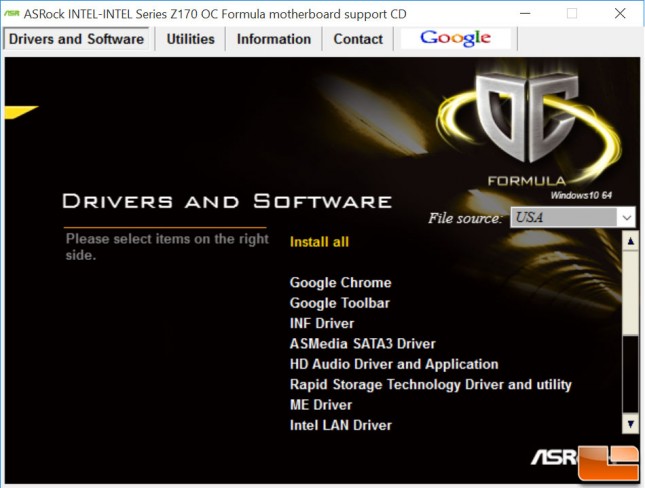 The ASRock Z170 OC Formula support CD is designed to be used worldwide, the drivers and software are actually downloaded as needed from their servers helping to ensure you have the latest versions.  When you first start up the Support CD, it checks the CD for files and finds the bare minimum.  Using the File Source drop-down you get the choice of your region, selecting it will search the ASRock servers in the region for software and drivers.  When you select a driver, if you already have it installed, it’ll show you the version number, and the version ASRock is providing, allowing you to decide which driver you want.  Of course, there’s an “Install All” option for those that just want everything installed.  One piece of software that is at the bottom is ASRock’s App Shop, it doubles as their Live Update utility, and is where you can find all the additional software the ASRock makes available. 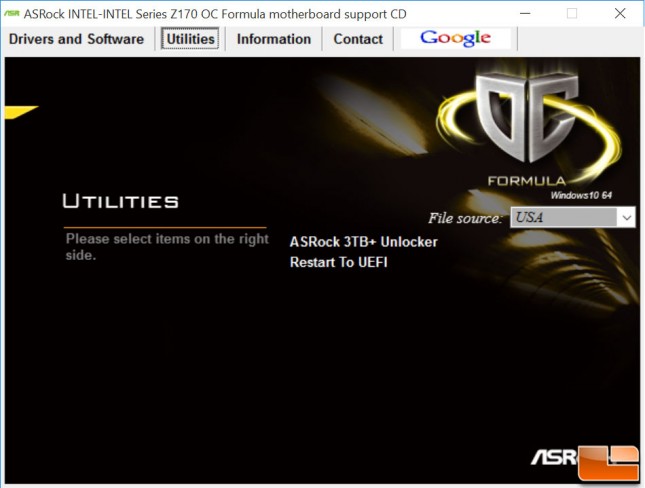 On the Utilities tab, for the USA region, only two options are provided, ASRock 3TB+ Unlocker, and Restart to UEFI.  The 3TB+ Unlocker utilities is only needed if you are running a 32-bit operating system which can’t take advantage of the large hard drives.  The Restart to UEFI utility, is helpful if you enable Fast Boot, to ensure you can boot into the BIOS without issues.

The other three menu options are pretty basic, the Information menu provides links to the documentation on the Z170 OC Formula such as the User Manual, RAID Installation Guide, Intel Smart Response Install Guide and others.  The Contact menu provides their address, email and website in case you didn’t know how to find it.  The Google menu was blank for the US region, other regions it provided links to install Google Chrome. 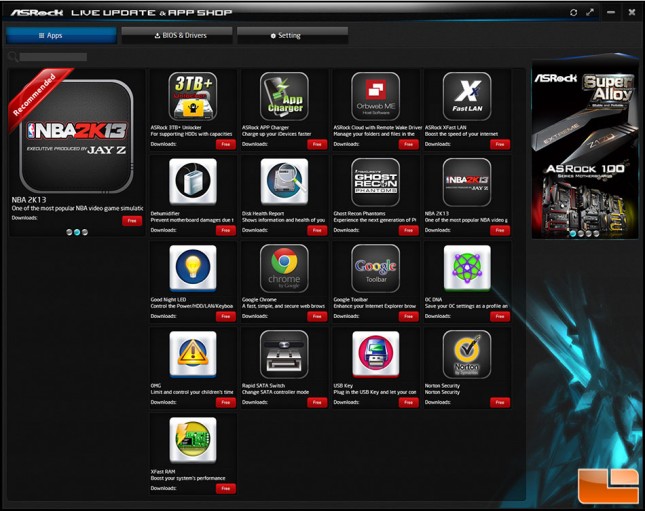 Within ASRock’s App Store you can find the additional ASRock applications which are designed to enhance your experience with their motherboards.  For example,  “App Charger” allows you to charge devices faster, “Dehumidifier” works to remove some of the moisture from the motherboard, while “Good Night LED” allows for an easy way to turn off the LED’s on the motherboard.  There are a few non-ASRock applications here as well, Google Chrome, Google Toolbar, Norton Security (limited trial), Ghost Recon Phantoms (with bonus player skins) and others.  The nice thing about the ASRock App Shop is that it is a familiar interface for anybody that has used a smartphone in the past couple of years and you can easily find what ASRock is offering.