One of the things that we noticed with the some of the current AMD Radeon graphics card is that they aren’t as power efficient as NVIDIA GeForce cards when it comes to multi-monitor setups. This is something we don’t often touch on in all of our video card reviews, but we wanted to see how the NVIDIA GeForce GTX 750 Ti does as it uses a new architecture and we wanted to check how it supported more than one display. 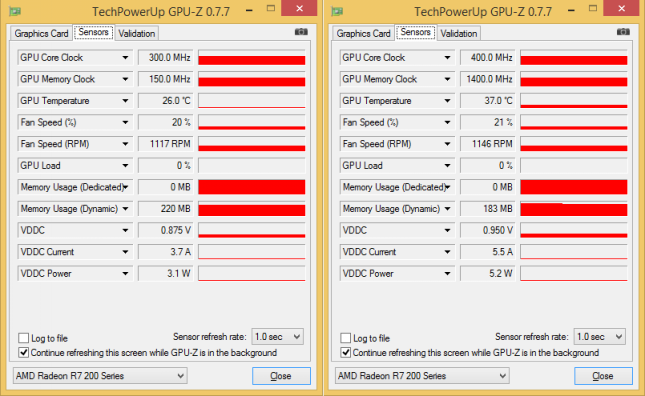 In the GPU-Z screen shots above we have the Sapphire Dual-X R7 265 2GB OC w/ BOOST running with one monitor on the left and two monitors on the right. Yes, Just hooking up the second monitor will cause the power draw to go up and many people don’t fully understand this. Having to push pixels and manage the clocks of two displays does put more strain on the GPU and NVIDIA increased the core and memory clock speeds to do this. You also need more voltage an an idle state to run the higher clock speeds and the means more heat and sometimes higher fan speeds. You can clearly see that the GPU idle temperature went up by 11C and the fan speed went up 1% as a result of hooking up a second display to the video card. 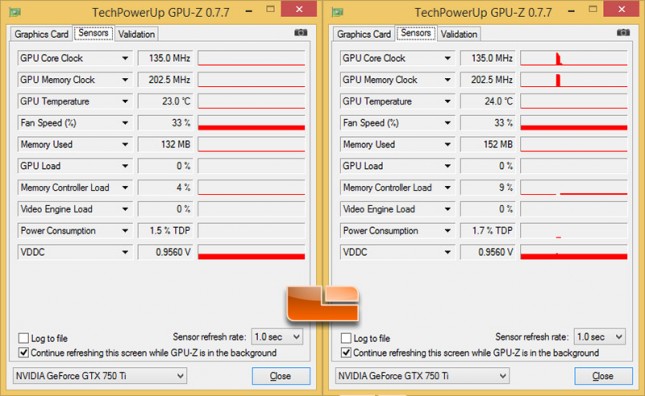 Here are the GPU-Z shots for the NVIDIA GeForce GTX 7500 Ti 2GB reference card that shows one monitor on the left and two monitors on the right. As you can see the NVIDIA GeForce GTX 750 Ti clock speeds, voltage and fan speeds all don’t change when a second monitor is hooked up. The only change is roughly a 5% increase in the memory controller load and about a 0.2% higher TDP (power consumption) as a result of the higher memory controller load. So, there was a 1C increase in temperature and a 2W increase in power consumption due to this, which is minor compared to the 20W or higher difference seen on comparable cards from AMD.

As you can see there is a pretty big difference in power consumption and temperatures when it comes to adding a second display with an NVIDIA versus AMD graphics card solution. Right now NVIDIA is clearly in the lead.