Reminder: on these next few pages, I will be showing the performance levels of these few gaming benchmarks while using a single 6970 video card, and as well as the onboard GPU of the Trinity and Llano based APUs. The resolution will remain at a 1280 x 720 resolution for a better comparison on how the tested platforms compare to one another. 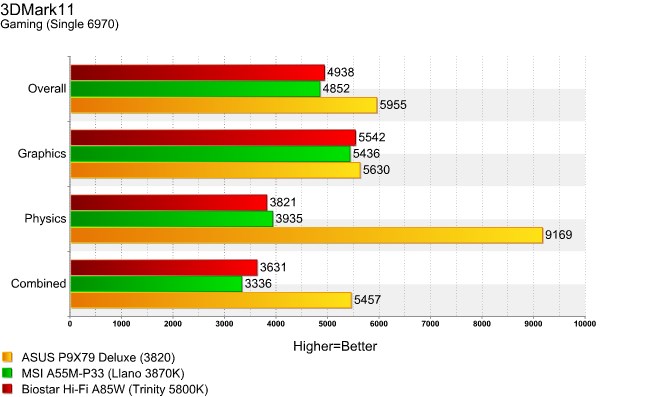 Granted the two tested APUs, Trinity 5800K, and the Llano 3870K, do not stand a chance against the mighty Core i7 3820 CPU. I am going to be more concerned with the Graphics (GPU) testing portion of 3DMark11. And looking at just the Graphics (GPU) testing we can get an idea that the CPU/APU does influence the single 6970 video card but it is not a large amount of influencing as all tested platforms were within 100 or so points of each other. 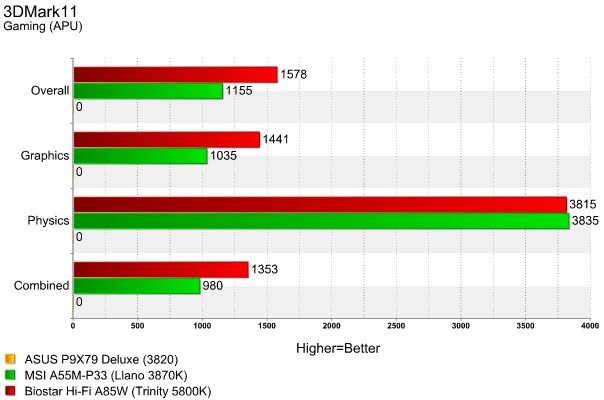 Since the Core i7 3820 does not have a GPU built into it I left this portion of testing out with this CPU. This is only an APU to APU comparison. The newer Trinity APU while being strapped to the Biostar Hi-Fi A85W motherboard outperformed the Llano based MSI platform in all but the Physics testing, which got me scratching my head a little on that portion of testing.