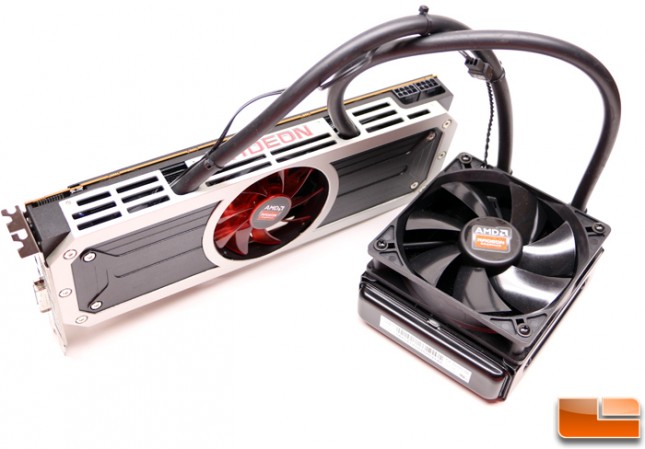 Here are some shots of the AMD Radeon R9 295X2 reference card that we’ll be looking at today. The card features a liquid cooler and reminds us of the ASUS ARES II video card that we reviewed over a year ago. The ASUS ARES II was a custom designed AMD Radeon HD 7990 graphics card that was liquid cooled by Asetek. It looks like ASUS and Asetek laid the groundwork for this card, which shows that the ASUS ROG line is really having a positive impact on the market.

The front of the AMD Radeon R9 295X2 has an industrial look to it and looks vaguely like the NVIDIA GeForce GTX 690 from 2012 due to the metal fan shroud and the bolt heads that were used more for style and design that core functionality. 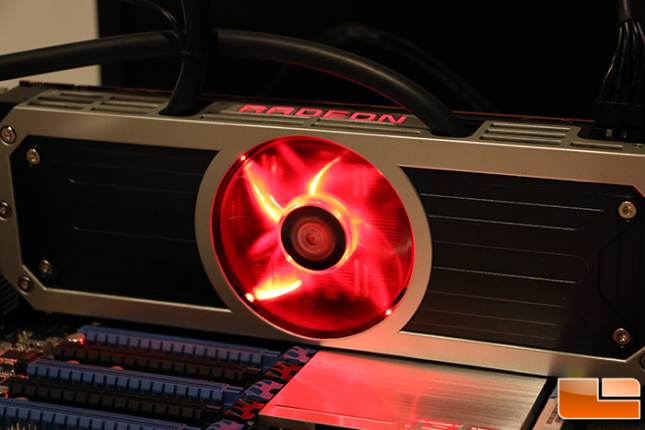 The center fan features red LED lights and the top Radeon logo is also backlit. This looks pretty neat, but we were a bit disappointed to find out that there is no software option or physical switch to disable the LED lighting off. There are some people out there that don’t care for additional case lighting, so it would have been nice to have that option. 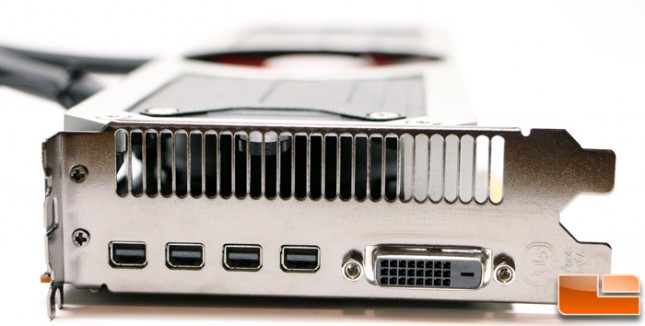 The AMD Radeon R9 295X2 is all about Ultra HD 4K resolution and will likely end up powering a 4K panel at some point it its lifespan. The price on 4K monitors has fallen sharply in the past year and basic models can now be picked up for under $1000. If you are spending $1499 on a video card and between ~$250-400 on a power supply to power it, chances are that you can afford that $800 4K panel to game on. The AMD Radeon R9 295X2 supports up to six displays off a single card. You have four mini-DisplayPort 1.2 with Multi-Stream Transport and a single Dual-Link DVI for video outputs. 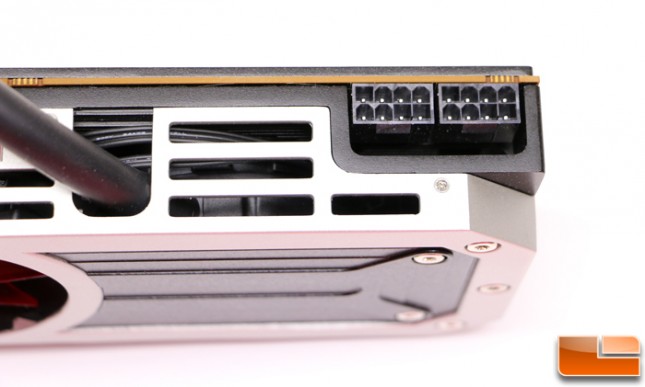 We went in-depth on the power needed for this card on the first page of this review, but here is a closer look at the two 8-pin PCIe power connectors on this card. You’ll want a power supply that supports 28 Amps of power per 8-pin connector. 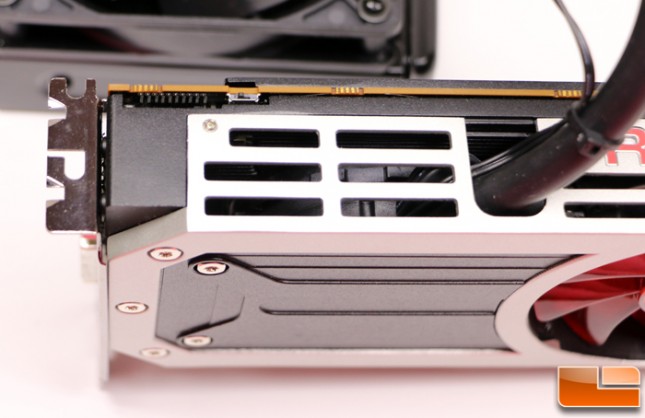 AMD placed a BIOS selector switch on the card, but there is not an Uber and Quiet mode on this card. It should be noted that the card does ship with two BIOSs on it, but both are identical. This switch is still useful though as if a BIOS every gets corrupted you can just switch over to the other one. There are also no CrossFire interconnects on this card as they are no longer needed to run CrossFire. If you get a second card you can just enable CrossFireX in AMD’s Catalyst Control Center and go about your day.

Here is a quick look at the back of the card. There is a nice metal backplate that keeps on the critical components safe as well as a pair of green LED lights on the back of the card that allow you to check the AMD ZeroCore Power mode of the card. When both GPU’s on the AMD Radeon R9 295X2 are in ZeroCore Power mode the component fan in the center of the card will stop spinning, however the radiator fan, will continue to spin to maintain good system airflow. Since most video cards are installed facing down, the two green LED lights will give you visual identification of the power more that each GPU is in. 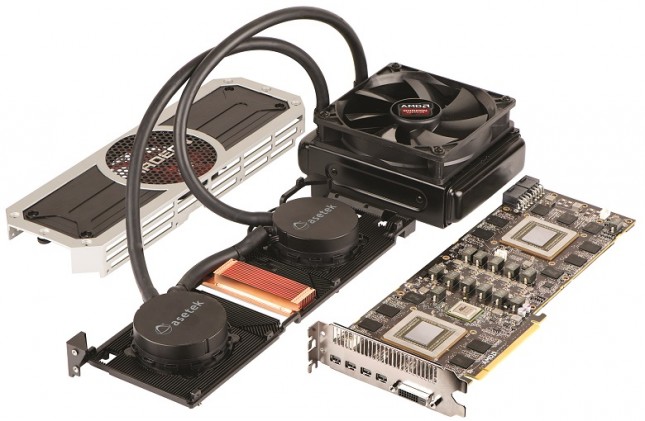 Here is a really nice exploded view from AMD that shows the Asetek Gen4 liquid cooling solution along with the copper heatsink used to keep all the voltage regulators cool. All of the power phases are located right in the middle of the card, directly under the 120mm cooling fan. You can also see the PLX bridge chip that allows the two GPUs to be linked together to the PCI Express 3.0 bus.

There isn’t much open space on the PCB design as AMD managed to utilize most all of it!

Let’s take a look at the test system and then move along to benchmarking!