The K-Series and Overclocking

Normally we save the overclocking towards the end of the review but we’re doing something a little different this time around. We’ve included the results of our highest stable overclock in our entire review to give you an idea of where it stacks up.

How high did we get our CPUs? We’ll get to that in a moment, because first we need to describe what has changed when overclocking Sandy Bridge.

For a long time we have been able to change the FSB or BCLK on Intel CPU’s in order to get a higher clock speed. However, that is now a thing of the past. With Sandy Bridge, Intel has moved the clock reference generator from the motherboard into the CPU, so overclocking BCLK more than a few MHz quickly over speeds parts that don’t do well with that sorta thing. BCLK raised from 100 to 102-103 can create massive instability and corrupted Windows installations. Intel has traditionally sold us CPUs with unlocked multipliers under the Extreme line, but at the usual asking price of $1000 they were not something many people could afford.

Back in May, Intel launched the new “K” series of CPUs, specifically for enthusiasts who didn’t want to pay an arm and a leg but also wanted to overclock their processor and not be bound by a motherboard that can’t reach a high BCLK. At a small additional cost over the non-K CPU it’s an attractive alternative. With Sandy Bridge Intel is again offering multiplier unlocked K-Series CPUs, the i5 2500K and i7 2600K. 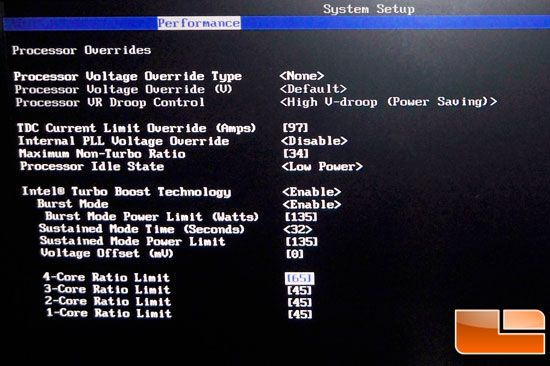 Supposedly the multiplier was to be capped at 57x; however, in the screen shot above we were able to choose up to 65x with our i7 2600K Engineering Sample. The reality is that it probably isn’t going to matter because the chances of a current stepping CPU getting to either of those speeds are very low or altogether unlikely. Contrary to the rumors flying around the internet, 5GHz isn’t a given on a Sandy Bridge processor.

So we know the routine for Nehalem; add a little voltage and keep upping the BCLK. Eventually you either run out of cooling or BCLK, not to mention you have a ton of power being pulled at the wall. If you want to go higher you need more cooling power…unless you’ve got liquid nitrogen or other exotic forms of cooling in which case you’d want an unlocked CPU. 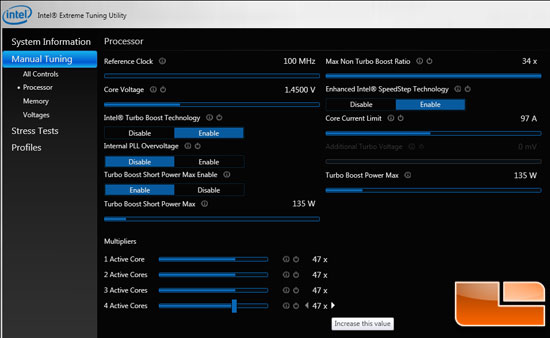 Right, you came here to read about the overclocking beast Sandy Bridge! Let’s describe how it’s done. With the K-Series CPUs the Turbo multipliers are unlocked. Decide how high you want the CPU to run with 1, 2, 3, and 4 active cores and away you go! For simplicity’s sake we dialed in a 45x multiplier and rebooted, what came next was quite a shock…it booted straight into Windows without touching the voltage. It turns out I picked the exact speed at which it topped out on the default voltage. The K-Series CPU cooler was performing admirably; load temperatures were reaching 65C so it was well within reason. Going past 4.5GHz required additional voltage, and I decided that extra cooling would be a good idea so I strapped on a Corsair H50. Load temperatures dropped to low 50’s with the fan at less than full speed. To reach 4.7GHz stable in Windows I needed to dial in 1.375v. The H50 was still easily handling a full load of Prime, Cinebench, and [email protected] 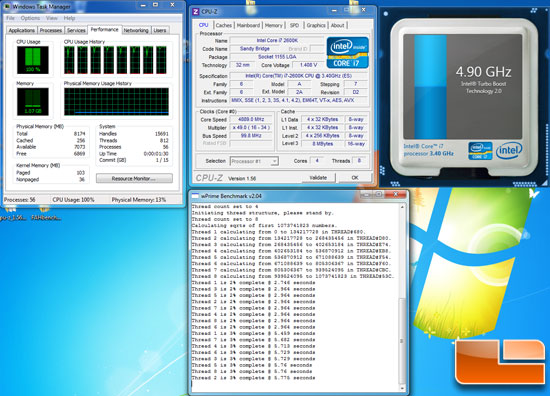 I decided to go for broke and skip straight to 5GHz; sadly, it never made it. What I settled on was 4.9GHz. To get there completely stable took 1.525v indicated in the BIOS, with 1.45v showing in the Intel Overclocking Utility under load. I tried all the way up to 1.6v to reach 5GHz but to no avail as it would start to load Windows 7 and fail. I even tried changing the 1 core CPU load to the 50x multi but it still refused to go past the same point in the Windows 7 boot up. There is a very distinct “terminal velocity” on Sandy Bridge where adding more voltage and increasing the cooling capacity will not yield an improvement in clock speed. Some are calling it a “multi wall” but it’s really just the speed limit of a particular CPU.

Our ideal overclock would be in the 4.7-4.8GHz range at 1.45v indicated in the BIOS. You get incredible performance with about a 30-40 Watt increase in load power consumption. Cooling requirements are reasonable also, with our H50 maintaining mid 50C while running [email protected] Going over these speeds requires much more voltage for stable operation, a noticeable increase in power consumption, and a little more heat. 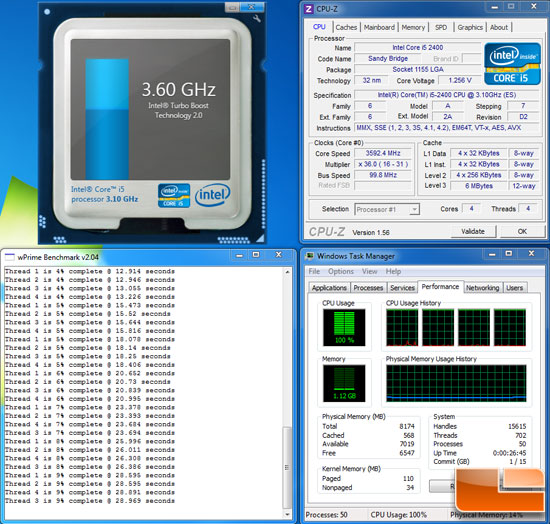 What’s this? The good news is that the rumors of Intel killing overclocking for non-K Sandy Bridge processors were slightly exaggerated! If you’ve got a CPU with Turbo Boost functionality it can be overclocked!! The bad news is that it’s pretty limited. Our Core i5 2400 is rated at 3.1GHz with a typical Turbo speed of 3.2GHz with four active cores, with an absolute maximum of 3.4GHz under a single core load. By changing the Turbo multipliers to the maximum allowed either in the BIOS or the Intel Extreme Tuning Utility and raising the power consumption limits to 135W we were able to get the Core i5 2400 to run at a solid and steady 3.6GHz with a full 4 core load. 2 and 3 core loads are allowed to run at 3.7GHz and under single core loads Turbo was allowed up to 3.8GHz. These are noticeable increases in speed and only added about 15w of additional power use. It was on default voltage as well.

Because overclocking Sandy Bridge is quite a change in what most are used to, let’s take a look at what some of the differences are on the next page.