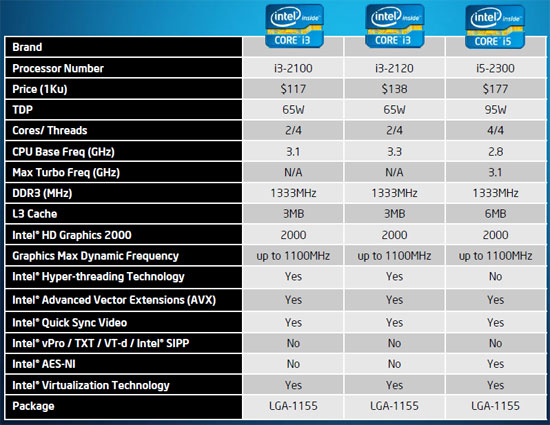 Today we have details for the full line of Intel’s Sandy Bridge based CPU’s. Starting with the Intel Core i3, Sandy Bridge comes in two standard desktop flavors. Core i3 2100 is the entry level processor at $117 and a 65w TDP. It is a dual core with Hyperthreading running at 3.1GHz with no CPU Turbo Boost and a 3MB L3 cache. The on-die GPU by default runs at 850MHz and can Turbo Boost up to 1100MHz. Core i3 2120 has the same features but carries an operating speed of 3.3GHz. Core i5 2300 is a 3.1GHz CPU with 6MB of L3 and is a full quad core CPU. It is the least expensive Sandy Bridge with AES-NI, yet all Sandy Bridge CPU’s feature AVX. 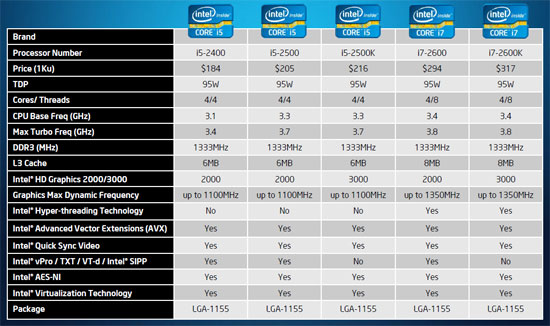 The enthusiast “K-series” unlocked processors start with the Intel Core i5 2500K at $216. Its base operating speed is 3.3GHz and can Turbo up to 3.7GHz before the tweaking fun begins. The Intel Core i7 2600K is at the top of the Sandy Bridge heap, boasting a full feature set of Hyperthreading and an 8MB cache, a CPU clock speed of 3.4GHz with Turbo up to 3.8GHz, GPU Turbo Boost up to 1350MHz. Both K-series processors come with the Intel HD Graphics 3000 engine while the rest of the lineup carries the Intel HD Graphics 2000. 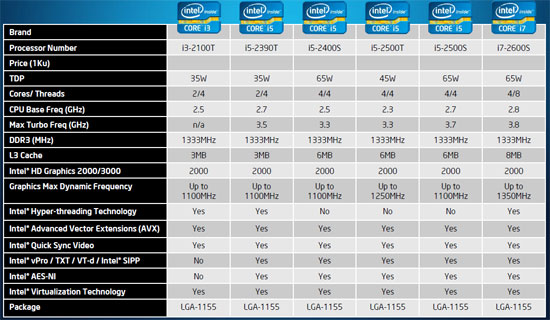 Intel also has “T” and “S” variants of Sandy Bridge that have a very low TDP. Pricing is not currently available for these processors but will carry a premium compared to the standard Sandy Bridge CPU’s. The primary difference is that the CPU base frequency is much lower.

Let’s take a look at the Sandy Bridge CPUs we have on the burner today!