As the “Tick” in Intel’s processor advancement, we have a new 32nm micro-architecture. With the shrink from 45nm to 32nm manufacturing size Intel has gained in energy-efficient performance. Highlights of other advancements are Intel Turbo Boost 2.0, a new and improved graphics core, and a new instruction set called Advanced Vector Extensions (AVX).

A very brief and high level overview of changes to Sandy Bridge includes:

One of the more exciting features of Nehalem which became even more aggressive in Lynnfield is Turbo Boost. By increasing the clock speed of active CPU cores and powering down idle cores you can still operate within the TDP (Thermal Design Power) limit of the CPU package and improve performance of active threads. Turbo Boost in Nehalem and Westmere based architectures assumes that the CPU is immediately at its rated TDP when it goes into Turbo Boost and therefore sustains a solid and predictable Turbo Boost. In practice, the processor doesn’t heat up immediately; there is a ramp up to the TDP.

Sandy Bridge incorporates a more dynamic Turbo Boost and one that will allow the CPU to operate beyond its TDP for bursts of time until it heats up, then it will step down to run at its TDP when the CPU’s are being used. It does so by greatly increasing the clock speed during the initial boost, then lowering the clock speed closer to the base frequency to match TDP over the time that the processor is active. Most desktop applications don’t have a sustained CPU load, so as the heat drops below TDP the processor gains potential for more Turbo Boost speed.

In practice, most day to day computing such as installing software, browsing the web, or launching applications will see improved performance (given you have a hard drive that can keep up!) as these aren’t terribly intensive CPU tasks and will see the highest Turbo Boost speeds. Applications that have sustained CPU use on all cores can expect similar speed gains as current Turbo Boost, which is typically 1 speed bin higher than rated.

With the CPU and GPU now being a part of the same monolithic die, the GPU has a similar Turbo Boost functionality. During workloads that are more GPU demanding it can throttle down the CPU cores and Turbo Boost itself to match the demand. 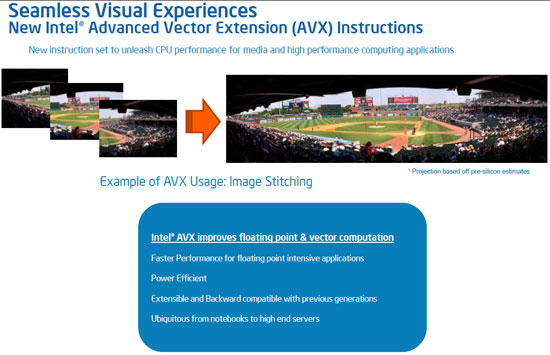 Intel AVX is a new 256 bit instruction set extension to SSE and is designed for applications that are Floating Point (FP) intensive. It is being released as part of the Sandy Bridge processor family and will be present in platforms ranging from notebooks to servers. Intel AVX improves performance due to wider vectors, new extensible syntax, and rich functionality. This results in better management of data and general purpose applications like image, audio/video processing, scientific simulations, financial analytics and 3D modeling and analysis. Of course, you have to have software that is able to take advantage of it and Intel is working hard with ISV’s for AVX implementations.