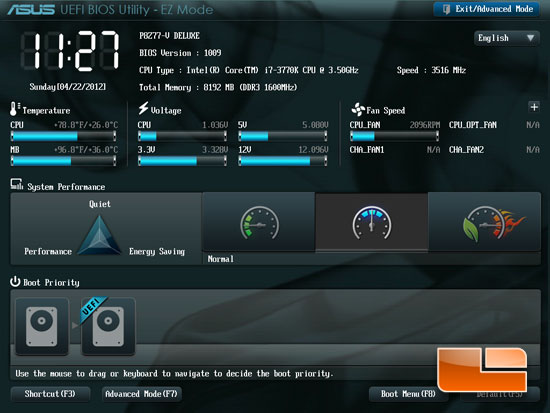 When we first boot up the ASUS P8Z77-V Deluxe into the BIOS the first page that comes up is the EZ mode. Here we can choose from three different profiles including energy saving, normal and an overclocked profile for improved performance. We can also drag and drop the connected devices to change our boot priority. 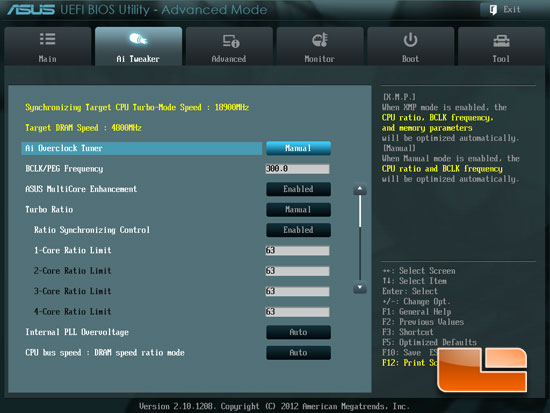 One of the main pages that you will likely become extremely familiar with is the AI Tweaker. This is the page that most of your overclocking is done in. Above we have set the options to their maximum so we can see what the ASUS P8Z77-V Deluxe is capable of. The maximum Bclk of the P8Z77-V Deluxe is 300MHz and the maximum CPU multiplier for the new Intel 22nm ‘Ivy Bridge’ Processors is 63. 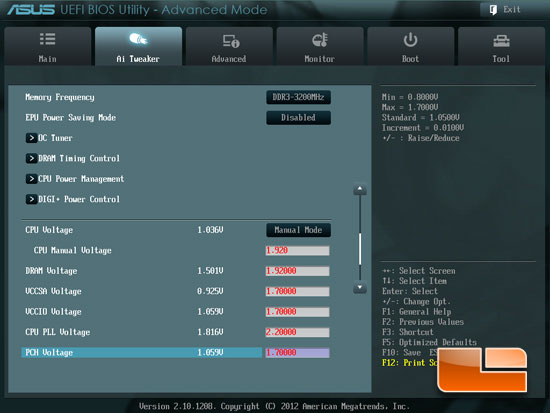 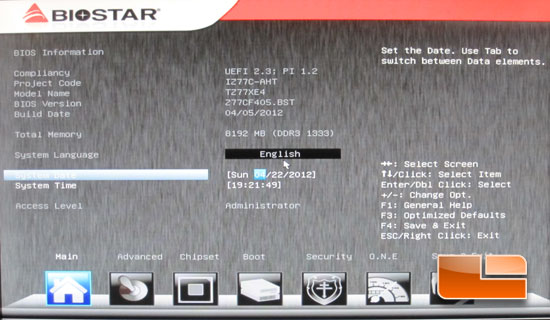 Heading in to the UEFI BIOS on the BIOSTAR TZ77XE4 the first thing that we notice is that it isn’t quite as clean as the UEFI BIOS on the ASUS P8Z77-V Deluxe that we just looked at. It may not be as clean but it was still more than capable of getting the job done today. Above we can see the main page for the BIOS; there aren’t a lot of options on this page but we can change the system language, date, and time. We can also get a general overview of the system. 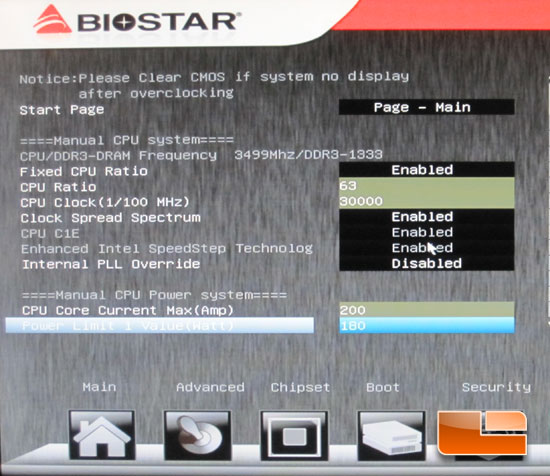 Heading into the BIOSTAR O.N.E. page, once again the maximum Bclk is 300MHz and the maximum multiplier is 63 with our Intel Core i7 3770K. 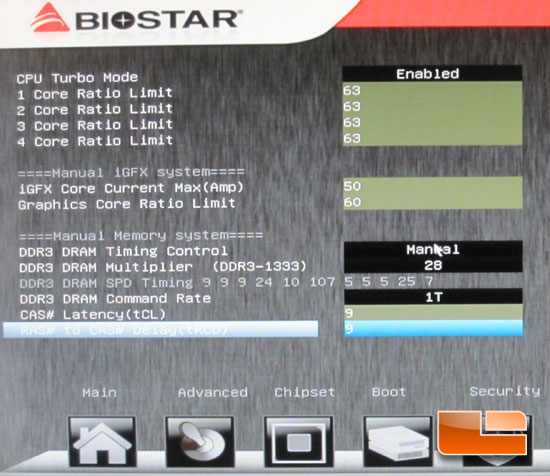 Above we can see that the BIOSTAR TZ77XE4 is capable of per core overclocking. We can tweak the turbo limits to raise one core to x50 and one to x48 or any combination across the four cores. This can help system stability if one or more of the ‘Ivy Bridge’ cores doesn’t like as high of a CPU multiplier as the others do. The BIOSTAR TZ77XE4 is capable of running the system memory at 2800MHz without any tweaking to the Bclk. 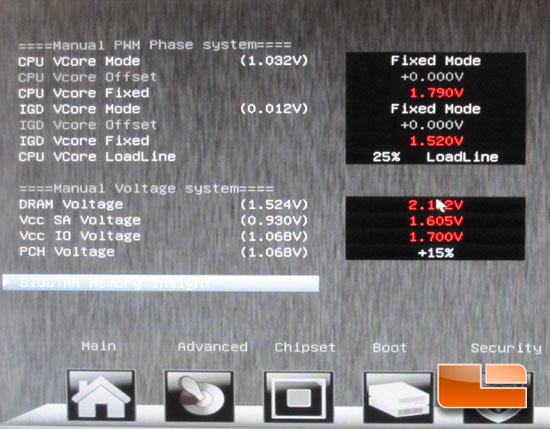 The BIOSTAR TZ77XE4 doesn’t offer quite as much CPU core voltage as the ASUS motherboard does. We can only raise the vCore to 1.79 Volts compared to the 1.92 Volts we saw above. Though anything over 1.35V and you are starting to get into dangerously high voltage and temperatures depending on your cooling. 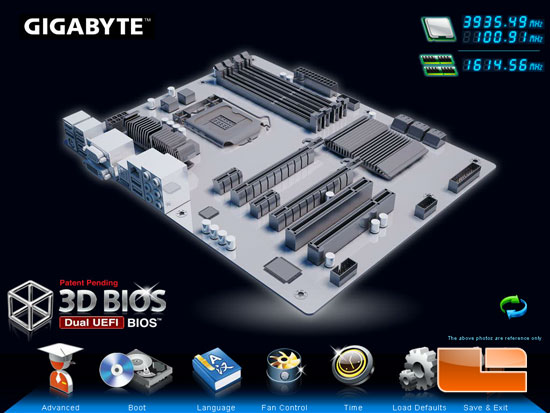 Recently GIGABYTE joined the crowd and brought out their own version of UEFI BIOS; they call theirs 3D BIOS. It’s justly named from the image above. We have a 3D image of the GIGABYTE Z77X-UD5H and we can click on a specific area of the motherboard and it will bring up a menu with options for that area that can be adjusted. I didn’t work on the Z77X-UD5H with this page but I have used it in the past and it is very user friendly. 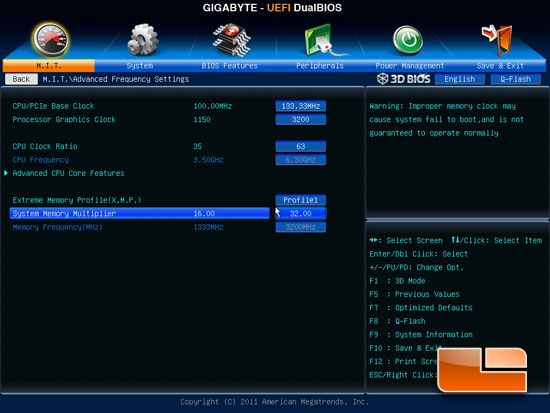 Taking a look at some of the overclocking options in the GIGABYTE Z77X-UD5H 3D BIOS the first thing that jumped out at me was the maximum Bclk frequency is only 133.33MHz. Compared to the 300MHz we saw on the ASUS and BIOSTAR motherboards it seems lacking, but few processors can hit 110MHz Bclk let alone 300MHz. Once again we can see the multiplier is limited to 63. The ASUS may have been the first LGA1155 motherboard that we have seen capable of running the memory at 3200MHz, but it appears that it isn’t the only one — the GIGABYTE Z77X-UD5H is also capable of that impressive feat! 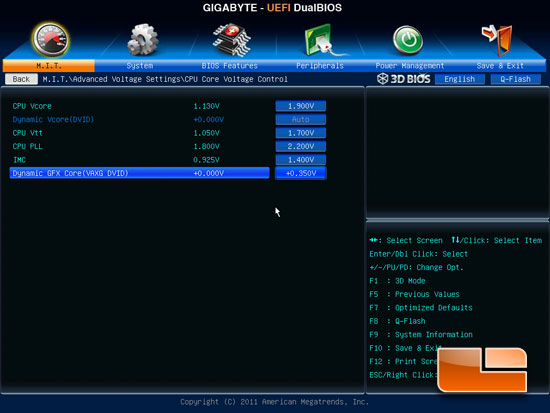 The maximum CPU vCore on the GIGABYTE Z77X-UD5H is 1.9 Volts, slightly lower than the ASUS P8Z77-V Deluxe. Though it is still more than enough to cause some serious damage if you aren’t careful. 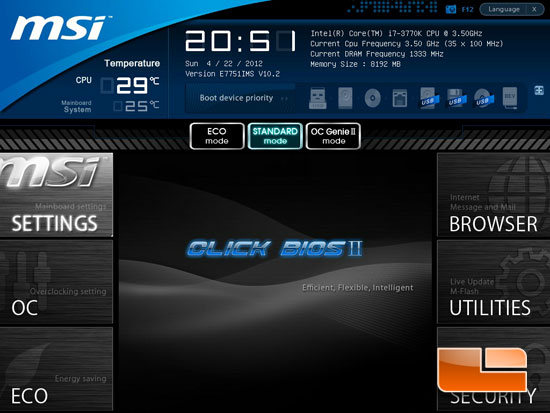 When I got my first look at the MSI Click BIOS II, I wasn’t wild about it. It was a very drastic change, and it made it a little tough to find things at first. Now that I have had the opportunity to play with the MSI Click BIOS II a couple of times I am getting used to it. In all honesty, once I got past the initial change and learning curve, it is very well laid out and organized. 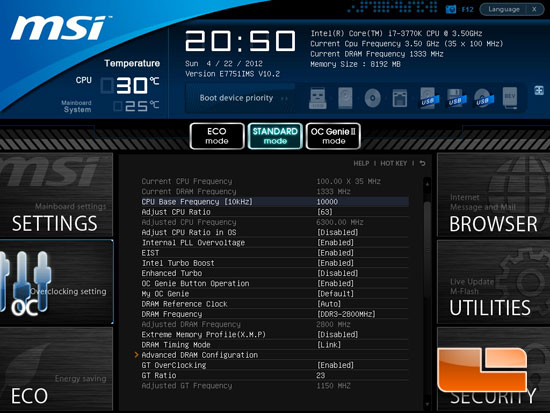 I didn’t raise the CPU Bclk in this photo because I wanted to show the maximum memory frequency of 2800MHz. The CPU Bclk will increase to 655.3MHz which is more than double anything we have seen previously. 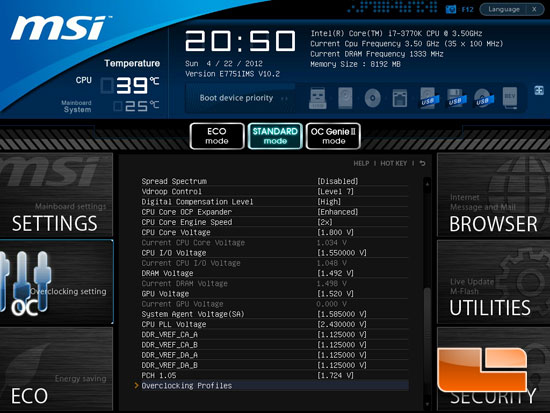 MSI has limited the Z77A-GD65 vCore to 1.8 Volts which isn’t as high as the ASUS P8Z77-V Deluxe or the GIGABYTE Z77X-UD5H, but is more than the BIOSTAR TZ77XE4. It’s interesting to see four boards all running the same chipset and none of them have the same limit on the CPU vCore.