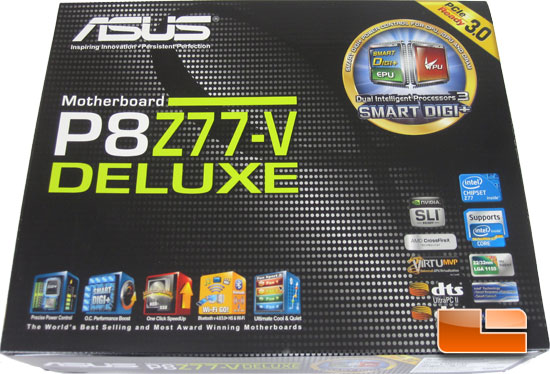 The retail packaging for the ASUS P8Z77-V Deluxe is typical of what we have seen from ASUS on their P8 product line. Across the bottom and lower right corner we have some of the features being shown off by the various emblems and logos. The upper right corner of the ASUS P8Z77-V Deluxe packaging boasts about the Dual Intelligent Processor3 technology and the PCIe capabilities. 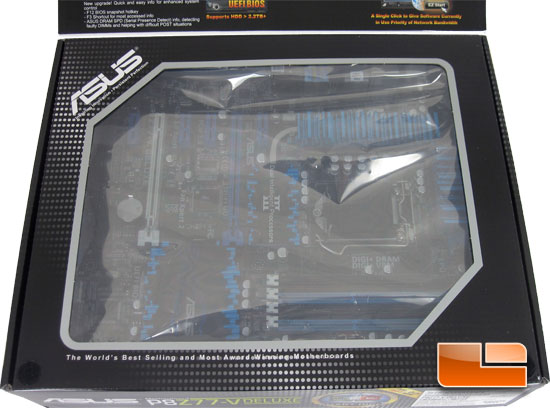 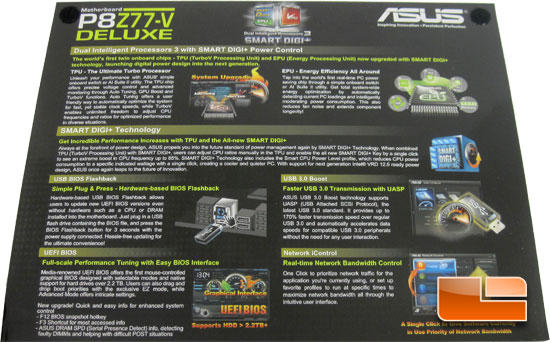 The inside of the cover breaks down some of the key features of the ASUS P8Z77-V Deluxe. Among these is the USB 3.0 Boost, USB BIOS Flashback, Network iControl, SMART DIGI+ technology, and the Dual Intelligent Processor 3 with SMART DIGI+ Power Control. The ASUS P8Z77-V Deluxe features are one of the things that helps to separate it from the crowd. The ASUS USB 3.0 Boost supports UASP (USB Attached SCSI Protocol). UASP is the latest USB 3.0 standard and will provide up to 170% faster transfer speeds when compared to standard USB 3.0. Here’s a rhetorical question for you: have you ever had a motherboard that needs the BIOS updated to support your processor, but you needed a compatible processor to flash the BIOS that you didn’t have? I have, and it’s a pain in the…well, you know. ASUS has a feature that allows you to flash the BIOS without the hardware needed to run the motherboard. All that you need is the motherboard, power supply and a USB flash drive with the BIOS on it. Put it all together, press the BIOS flashback button for three seconds and you are on your way to having your BIOS updated. 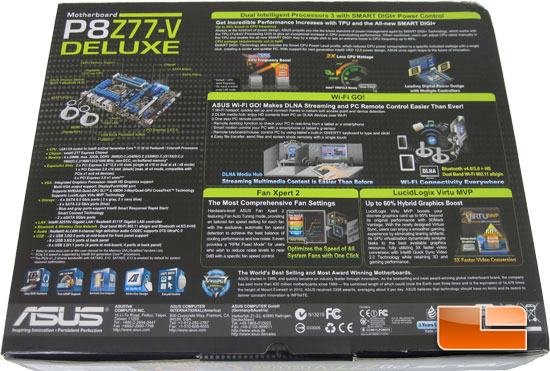 Flipping the retail packaging for the ASUS P8Z77-V Pro over to reveal the back we can see that it goes into more details on the features. Here we can find details on the Dual Intelligent Processors 3 with SMART DIGI+ Power Control, Wi-Fi Go!, Fan Xpert 2, and LucidLogix Virtu MVP. ASUS has also included a specifications list here for our reading pleasure. 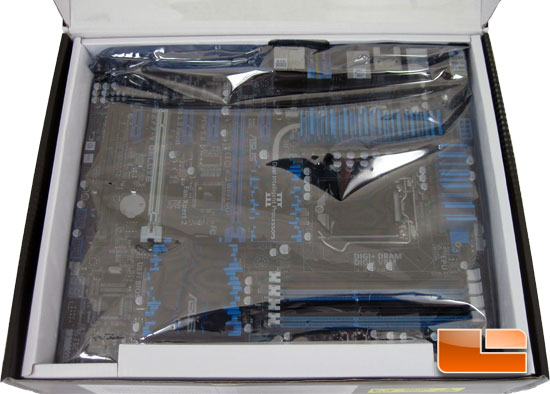 Once we open up the retail packaging we find ourselves presented with the ASUS P8Z77-V Deluxe Intel Z77 motherboard securely in place and protected from ESD in an anti static bag. 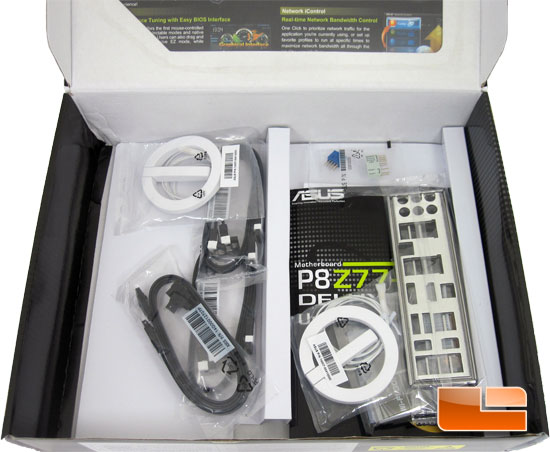 The bundle for the ASUS P8Z77 is well segregated below the motherboard. 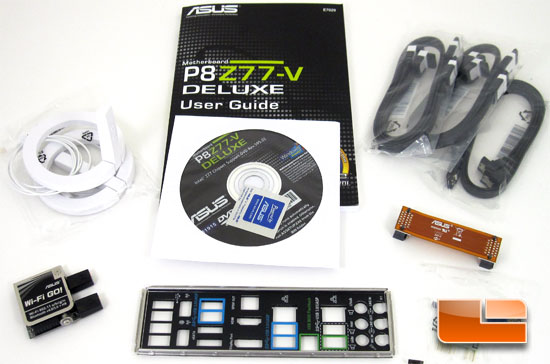 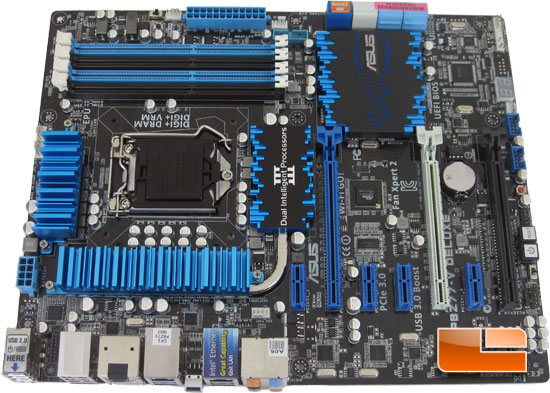 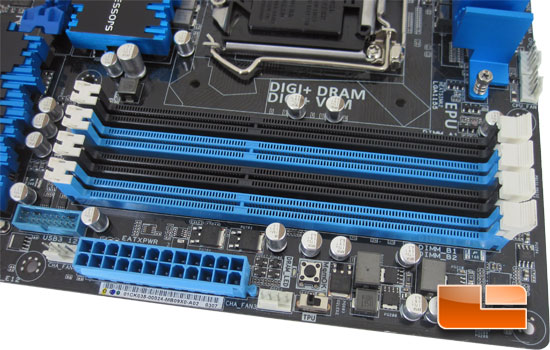 The first corner of the ASUS P8Z77-V Pro features four DIMM slots that will support up to 32GB of memory and speeds up to 2600MHz! Below the DIMM slots we have the MemOK button that will help with memory incompatibility issues should you run into any, the TPU switch that will automatically overclock your system and allow for precise voltage control and tuning. At the lower left hand corner of the DIMM slots we can see the internal header for the front panel SuperSpeed USB 3.0. This header is controlled by the Intel Z77 chipset. Not to be forgotten we also have a pair of four pin chassis fan headers visible here. 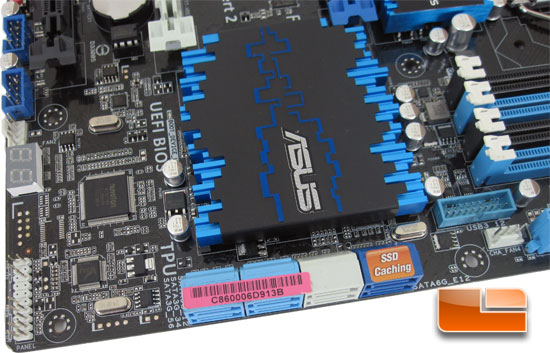 Swinging the ASUS P8Z77-V Deluxe around we can see that there is a grand total of eight internal SATA ports. The four light blue SATA ports are the SATA II 3Gbps ports from the Intel Z77 chipset while the pair of white SATA ports are the Intel SATA III 6Gbps ports. The remaining two darker blue SATA ports are SATA III 6Gbps as well, though they are controlled by a Marvell 9128 PCIe SATA 6Gbps controller. Just above the SATA ports we can find the heatsink that keeps the Intel Z77 chipset cool. Working our way up the edge of the ASUS P8Z77-V Deluxe we can find the pinout for the front panel, ASUS Q-Code LED display, four pin chassis fan header, and a pair of internal USB 2.0 headers. 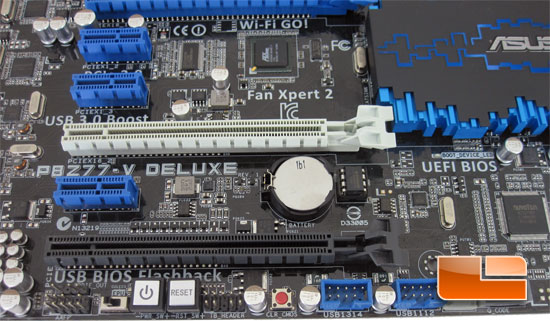 Just beyond the USB 2.0 headers, we have an onboard clear cmos button, onboard power and reset, EPU switch, the front panel audio, and the SPDIF out. You may have noticed that I skipped a header. Between the reset button and the final internal USB 2.0 header is a pinout labeled with TB_Header. This will allow you to connect a Thunderbolt (codenamed Lightpeak) add-in card if needed. If ASUS were to add Intel thunderbolt to the PCB it would drive the cost of the ASUS P8Z77-V Deluxe up for everyone, and few people are going to be taking advantage of the Intel Thunderbolt technology at this point. By supplying this pin out end users will be able to add the Intel Thunderbolt technology for around forty bucks. 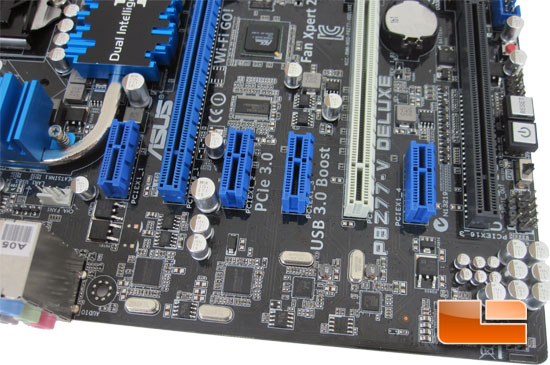 The ASUS P8Z77-V Deluxe features three PCIe x16 slots that all will run at PCIe Gen3 when paired with an Intel ‘Ivy bridge’ processor. You can run two graphics cards at x8/x8 or a single card at x16. The third PCIe x16 slot has a maximum bandwidth of x4 and is compatible with x1 and x4 cards. There are also four PCIe x1 slots; PCIe x1_2 shares bandwidth with SATA 6G E12. The SATA port is enabled by default for system resource optimization. 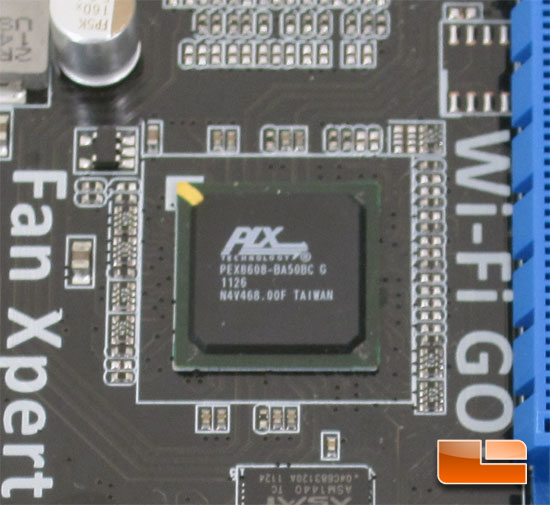 ASUS has implemented a PLX chip on the ASUS P8Z77-V Deluxe. This particular PLX chip is a PEX8608 which is a PCIe Gen 2 chip. ASUS left this as a PCIe Gen 2 chip so that everything that runs over the PCIe bus doesn’t have to take away from the graphic card slots which are PCIe Gen 3 when running an Intel ‘Ivy Bridge’ processor. 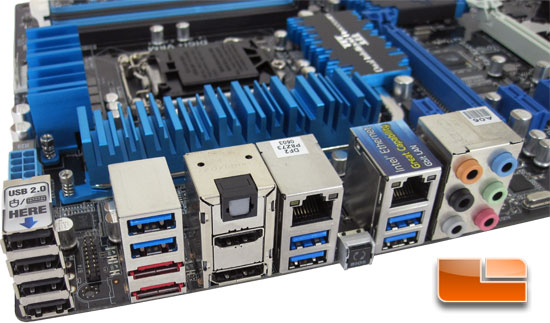