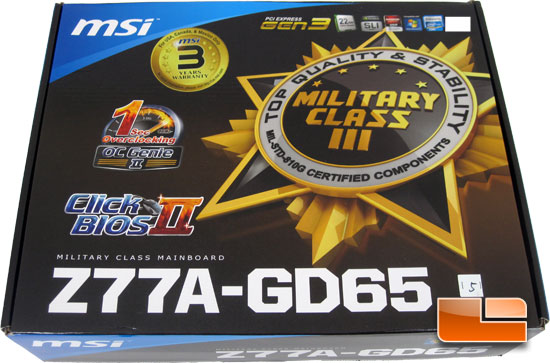 The MSI Z77A-GD65 retail packaging boasts about the features that are included on the Z77A-GD65. The largest and most prominent is the Military Class III logo. We can also see the OC Genie II, Click BIOS II, MSI 3 year warranty, PCI Express Gen 3, 22nm processor support, NVIDIA SLI, and the AMD CrossFireX logo. 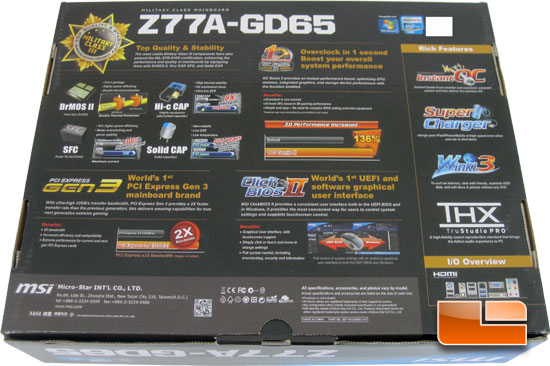 Flipping the box over we can see a breakdown of the various technologies on the MSI Z77A-GD65 motherboard. Some of the technologies not included on the front of the packing include Instant OC, Super Charger, Winki, and the THX TruStudio Pro. 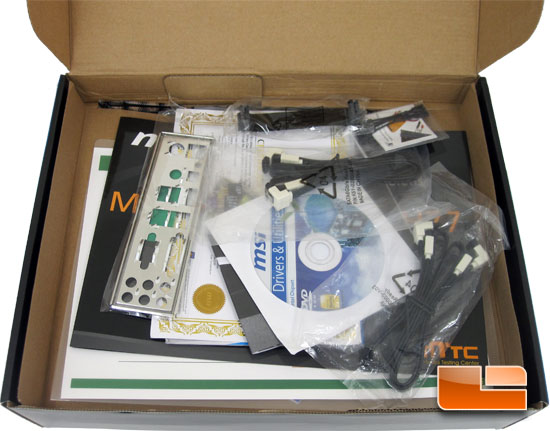 Once we open up the retail packaging we can see that the included bundle is more chaos than organization. Keep in mind that this is an early sample and not necessarily the finished packaging. 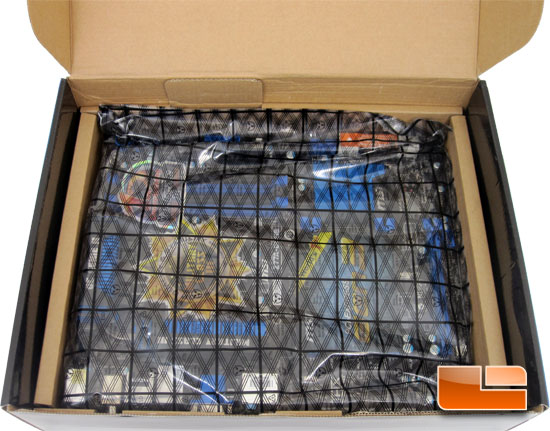 Removing the bundle for the MSI Z77A-GD65 we can see that the motherboard is quite securely packaged within the packaging and protected from ESD with the traditional anti-static bag. 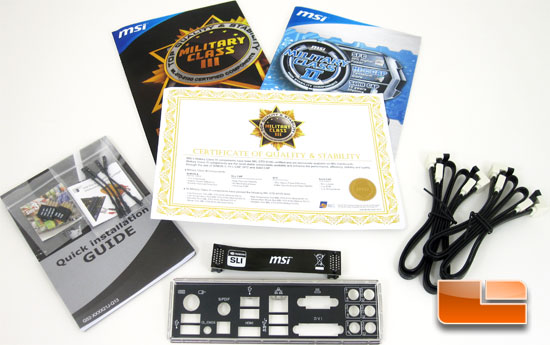 The bundle that comes with the MSI Z77A-GD65 has all the accessories that you need to set up your new system. Included with the MSI Z77A-GD65 are Manuals, Driver Disc, quick installation guide, four SATA cables, NVIDIA SLI bridge, I/O shield, MSI M Connects, V-Check plugs and a certificate of quality and stability. 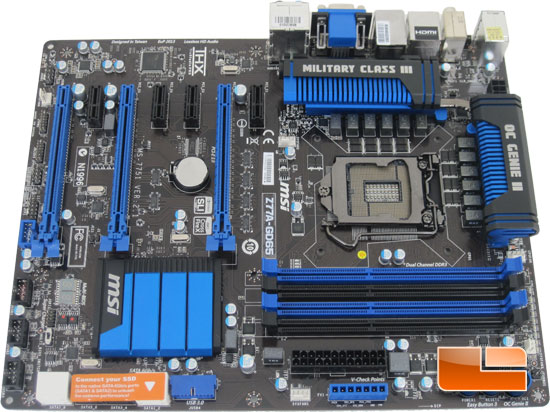 The MSI Z77A-GD65 is a sharp looking board. I wouldn’t base a purchase on the look, but the blue and black color combination is sharp. The all black look is overdone lately, and while red and black looks good, the blue and black color combination is much more subtle and less contrasting. The overall layout of the MSI Z77A-GD65 is quite good. The Easy Button 3 onboard buttons are out in the open and easy to access even inside a PC case; the SATA ports and SuperSpeed USB 3.0 ports all come out parallel to the PCB so it will make cable management a breeze. 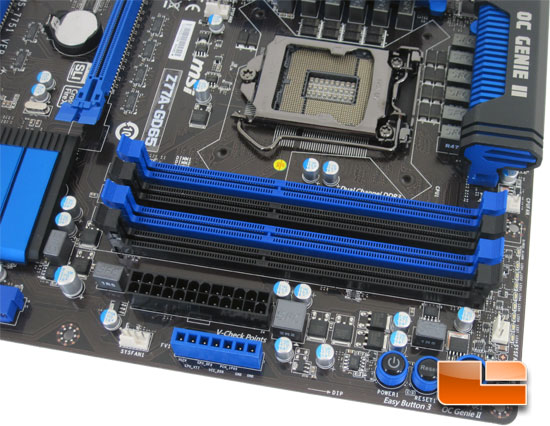 This is possibly the most important corner of the MSI Z77A-GD65, or at least the one with the most features. Staring in the corner we a series of three buttons; MSI calls this technology Easy Button 3. The first on the right is the OC Genie II, followed by the power and reset buttons. Below the 24pin motherboard power is the V-Check points. The V-Check points allow us to check the VCCP, CPU VTT, CPU Graphics, DDR VCC, and the PCH 1P05 voltages. The memory support for the MSI Z77A-GD65 is impressive; it will support up to 32GB of memory running at 2667MHz! Along the right edge of the MSI Z77A-GD65 we have the 4pin CPU fan header, a 3pin system fan header, and a series of 9 LEDs. The topmost LED is the DrMos alarm while the remaining eight LEDs indicate the number of phases that the CPU is currently using. 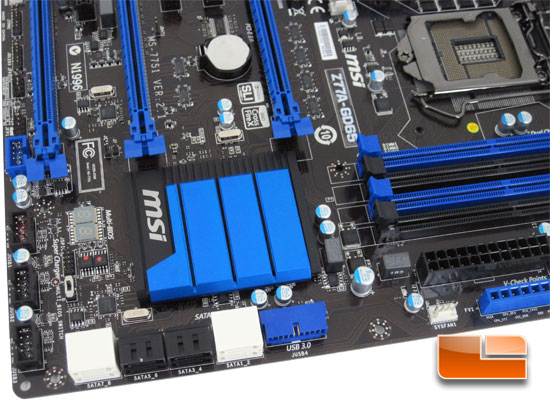 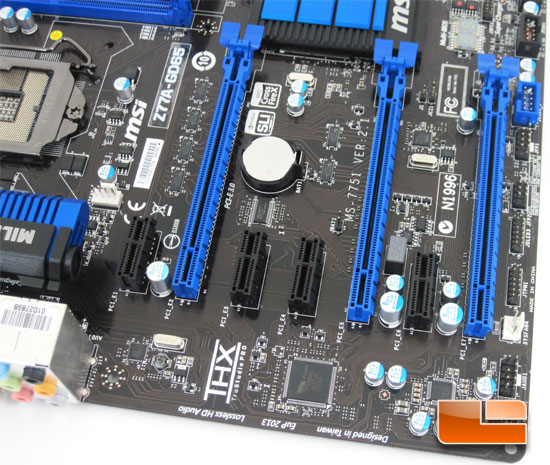 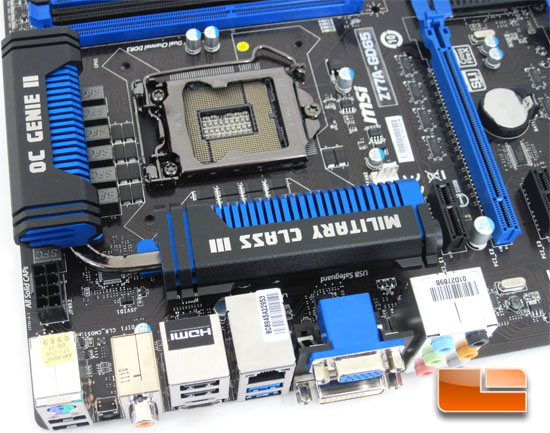 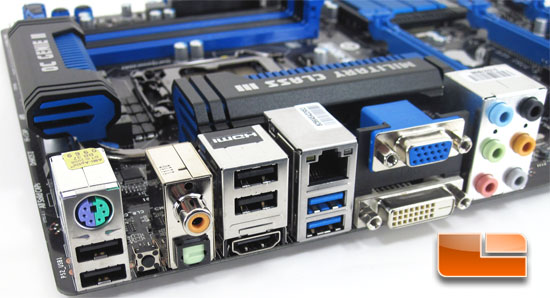