To overclock the AMD Radeon HD 7970 video card we used AMD Overdrive as we couldn’t find a third party utility that worked well on this card yet. 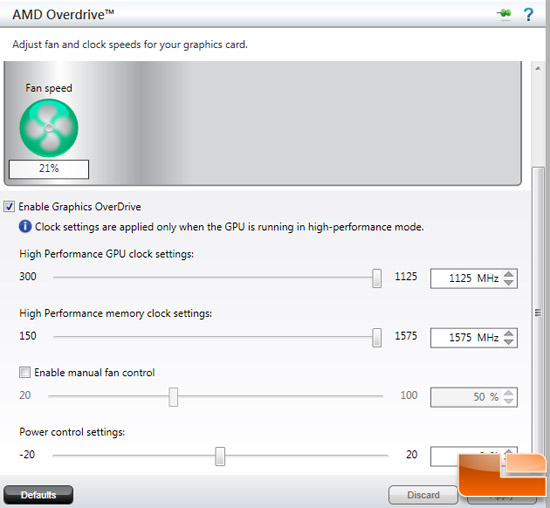 The AMD Radeon HD 7970 comes clocked at 925MHz on the core and 1375MHz on the memory, but if you enter the CATALYST Control Center (CCC) you can raise or lower the clock frequencies within the parameters set by AMD. For this card AMD set limits for this particular BIOS to 1125MHz on the core and 1575MHz on the memory. The good news here is that the Radeon HD 7970 that we were sent for testing could hit these clocks without touching the fan control or power control settings! Not bad to get a 200MHz jump on both the GPU and memory for a seconds worth of work. Without any voltage mods AMD says that enthusiasts and overclockers should be able to hit 1.2GHz and if someone wanted to do some voltage mods that they might be able to able to hit 1.3 GHz! We don’t want to mess with modding the Radeon HD 7970, so we stayed with the stock 1.1 Volts on the core and installed a new BIOS that ‘unlocked’ the clock limitations of the video card. 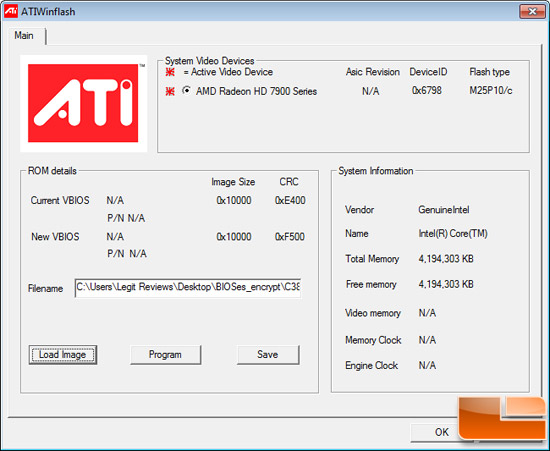 Our friends at AMD were kind enough to send over the new BIOS file and the WinFlash tool that was needed to get the job done. AMD plans on releasing an executable of this BIOS to the public, but the one they sent us to distribute was having a few issues on some boards we tried it on. 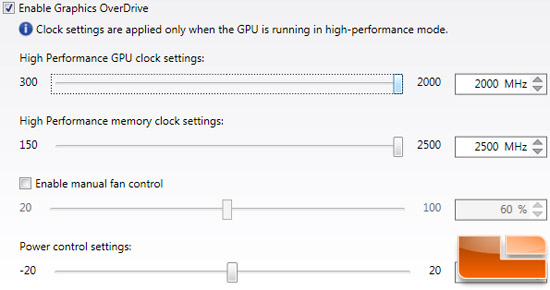 With the new BIOS installed we were shocked to see the max clock settings were now 2000MHz on the core and 2500MHz on the memory! Houston, we are not clock limited any longer! 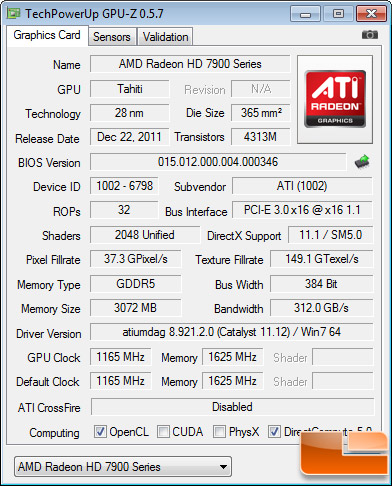 With the new BIOS installed we were able to reach 1165MHz on the core and 1625MHz on the memory with full stability. If we went up to 1170MHz on the core we would see artifacts in the benchmark, so without increasing the core voltage this is the best that we are able to get today. Remember, the Radeon HD 7970 started out with a 925MHz core clock, so this is an increase of 240MHz or 26%. This should really help out in the performance of the card and it also makes us wonder what these cards can do with extreme overclocking.