For testing power consumption, we took our test system and plugged it
into a Kill-A-Watt power meter. For idle numbers, we allowed the system
to idle on the desktop for 15 minutes and took the reading. For load
numbers we measured the peak wattage used by the system while running
the OpenGL benchmark FurMark 1.9.1 at 640×480 resolution. We also ran the game HAWX 2 and looped the benchmark three times and recorded the highest Wattage seen on the meter. 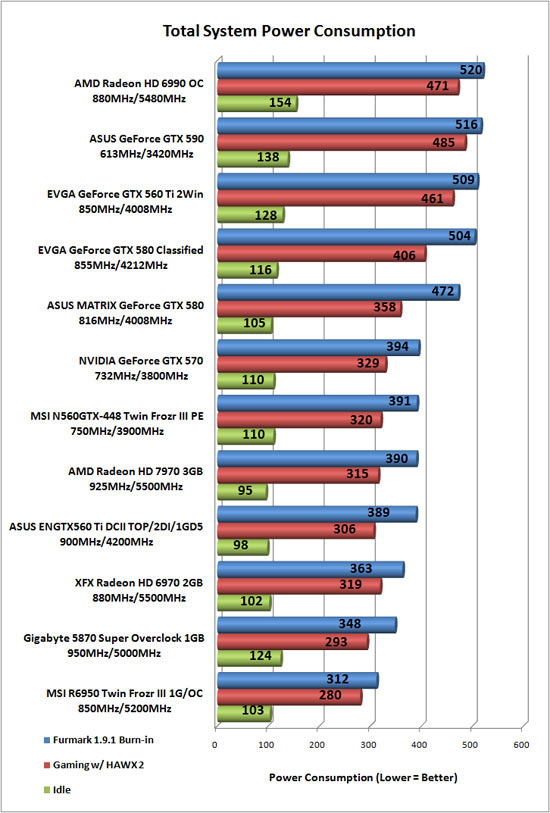 Power Consumption Results: The AMD Radeon HD 7970 blazed through the benchmarks, but when it comes to power use it did very well. At an idle it uses less power than any of the graphics cards that we have tested on the Intel Core i7-3960X test system that uses the ASUS P9X79 Deluxe motherboard with 16GB of memory and a CPU water cooler! Even at load the AMD Radeon HD 7970 used 390 Watts, which was basically the same as the GeForce GTX 560 Ti that it dominated in the performance testing. 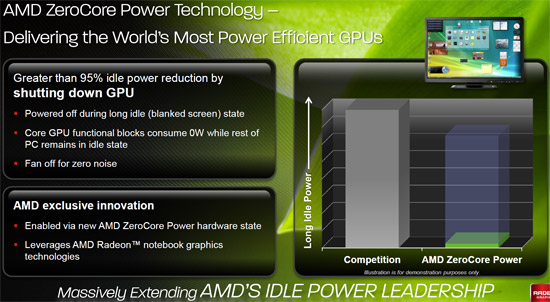 The AMD Radeon HD 7970 has a new technology called ZeroCore Power, which shuts down the GPU during periods of long idle (when the screen goes to sleep). When the GPU goes to the power state the fan stops spinning and the GPU core itself consumes 0W while the rest of the PC is still running. This is a really interesting feature and we found that it works great. After the system is at long idle the video card basically shuts down and goes to ‘sleep’ and we found the our test system consumed just 86 Watts in this long idle state. At regular idle the system was at 95 Watts, so this is a 9 Watt or a 9.5% reduction in power use!

This might appear to be a minor power difference, but imagine people that are running CrossFire. One of the main reasons AMD developed this technology was from feedback from CrossFire users as they didn’t need all those cards running when at idle as they produce noise and heat when it isn’t necessary.

AMD ZeroCore power is a feature that might sound weird at first, but after having it we found that we liked it! It will be interesting to see if NVIDIA does something like this for their cards in the future. 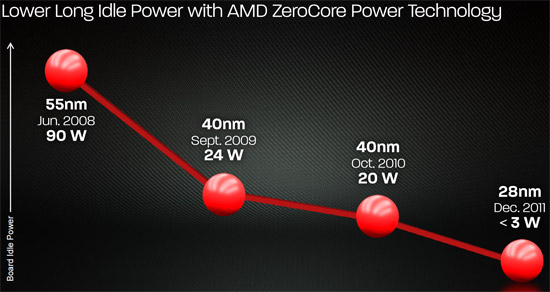 AMD has been working on getting the long idle power down for years and it looks like ZeroCore Power Technology is about as good as it gets. AMD says the Radeon HD 7970 uses less than 3 Watts in this long idle power state. It has to use some power in order to detect when you go to use the PC again.