If you are looking for a fast and affordable Solid-State Drive (SSD) the ADATA XPG SX8200 PCIe SSD series is worth taking a look at. This M.2 2280 NVMe 1.3 supporting drive series is actually ADATAs fastest SSD to date! ADATA went with the Silicon Motion SM2262 controller paired with Intel 64-Layer 3D TLC NAND Flash (2nd Gen) and was able to get read/write speeds of up to 3200/1700 MB/s over the PCIe Gen 3 x4 interface. ADATA also offers this exact drive with a more aggressive heat spreader with the XPG Gammix S11 series. Earlier this year we reviewed the ADATA XPG SX 8000/Gammix S10 series that featured the SM2260 controller with Intel 32-Layer 3D TLC NAND Flash (1st Gen). The XPG SX8200/Gammix S11 series drives are the latest and greatest that ADATA has for the time being.

Performance of course varies on the capacity of the drive that you get and the SX8200 series is a 240GB, 480GB, and 960GB capacities for $89.99, $169.99 and $349.99, respectively. When it comes to endurance you are looking at an endurance rating of 160 TBW per every 240GB of storage space. If you do some math with the series 5-year warranty that gives you a peak daily usage of roughly 88GB written per day on the 240GB drive, 175GB/day on the 480GB drive and 351GB/day on the largest 960GB drive. That is a good bit of data to be writing to a drive every day, so this endurance rating and warranty length is more golden. 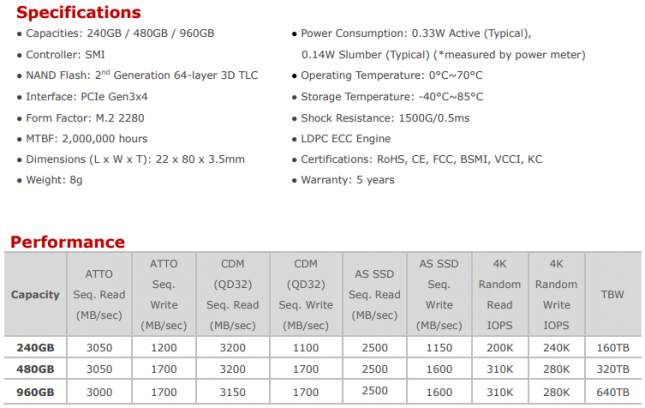 ADATA went with the Silicon Motion SM2262 8-channel controller to power the XPG SX8200 M.2 PCIe Gen3 x4 NVMe 1.3 SSD series. This is the same controller we discovered on the Intel SSD 760p 512GB drive and HP EX920 1TB drive that we have previously reviewed! The block diagram for the SM2262 controller is below for those that would like to take a quick look. 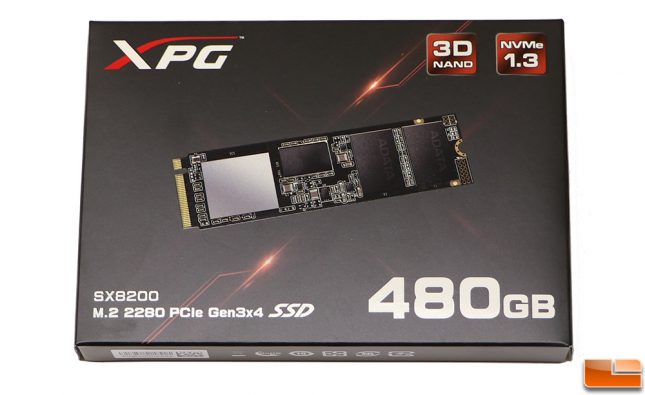 The ADATA XPG SX8200 retail packaging looks good and inside you’ll find the double-sided drive along with an optional heat spreader that you can apply. The drive itself looks great as you have a nice black PCB and not one that is green or blue. On the primary front facing side of the drive you have the SMI SM2262 controller, NANYA DRAM cache chip and two IMFT 64-Layer 3D TLC NAND chips (2nd Gen). You don’t need any special NVMe driver for this SSD controller as it works fine with the native NVMe drivers in Windows 10.

On the back of the this doublegle-sided M.2 2280 drive you’ll find two more TLC NAND Flash chips and another NANYA DRAM Cache controller. There is also the ADATA product label on this side that has the drives model number, capacity, serial number and other information.

The XPG SX8200 series is supported by the ADATA SSD Toolbox that is an optional drive management utility that can be downloaded for free online. This ‘SSD Toolbox’ allows you to monitor the drive, check for firmware updates, benchmark the drive, perform a secure erase, and more. This is a handy little utility that we suggest using as it shows the drive health and temperature. 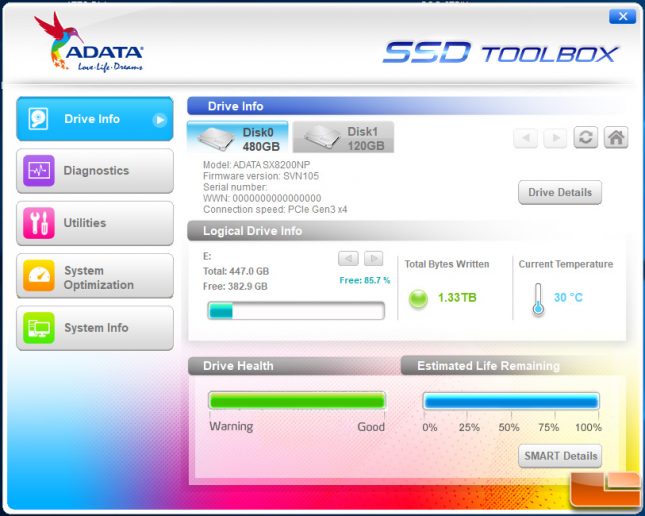 Let’s take a look at the test platform and then move along to the performance benchmarks.