The last area we wanted to test is power consumption and for that we have teamed up with our friends at Quarch Technology over in the UK! Legit Reviews now has a Quarch HD Programmable Power Module in-house for testing all SSDs (SAS, SATA and PCIe). This is a fully programmable power supply and measurement tool comes with power injection fixtures that stop power delivery from system, so all power comes from the power module and can be accurately recorded. Each rail can be programmed from 0 to 120% of its nominal voltage and all sorts of advanced power testing can be done. 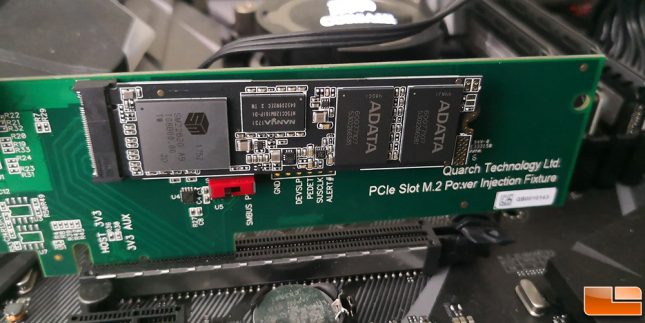 We just started playing with the power module, so the ADATA SX8200 was the guinea pig so to speak. We used IOMeter to run a 128KB 100% sequential read/write on the drive at a Queue Depth of 2 and recorded the highest power draw recorded. The SX8200 480GB drive hit 6.5 Watts during the read and 6.3 Watts during the write operation. ADATA doesn’t give any peak power numbers for the SX8200 series, so that is that. The only power consumption that ADATA has listed is that the SX8200 series uses 0.33W Active and 0.14W Slumber, but they fail to mention what drive that is even on. Our idle power draw was found to be 0.678 Watts, which is nearly double the ‘active’ number given by ADATA. Who really knows what ‘active’ means to them though. 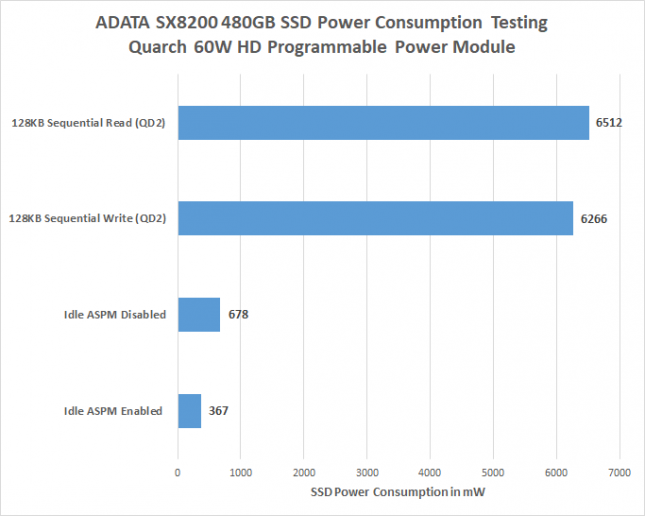 During our advanced power testing testing we enabled PCI Express Active State Power Management (ASPM) on our desktop board and in Windows 10. Enabling ASPM allows a PCIe link to be slowed down to save power when not being used. When enabling this feature the idle power of the ADATA XPG SX8200 480GB drive dropped from 678mW to 363mW on average and the idle temperate went from 31C down to 25C. This is because the drive was using the L1 low-power state! Enabling ASPM might still scare some folks, but the specification has been out for many years and it helps drop power consumption and temperatures.

Here is a screen capture of what happens to power on our test system when you go from ‘Maximum Power Savings’ to ‘Off’ under Windows 10 power options when testing with on our programmable power module by Quarch Technology. 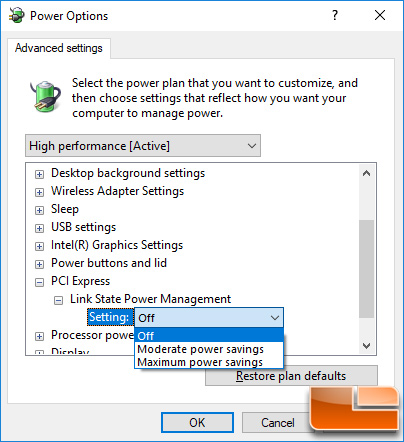