One of the biggest complaints I heard from users of the very first Intel Atom platforms is that you couldn’t stream video content from YouTube or Hulu let alone HD video content from either provider. I wanted to see if this system build was up for it as it is running the newer Intel Atom 330 dual-core processor and has NVIDIA Ion graphics to boot. I downloaded Firefox 3.5.2, loaded the latest version of Flash and began streaming HD content. 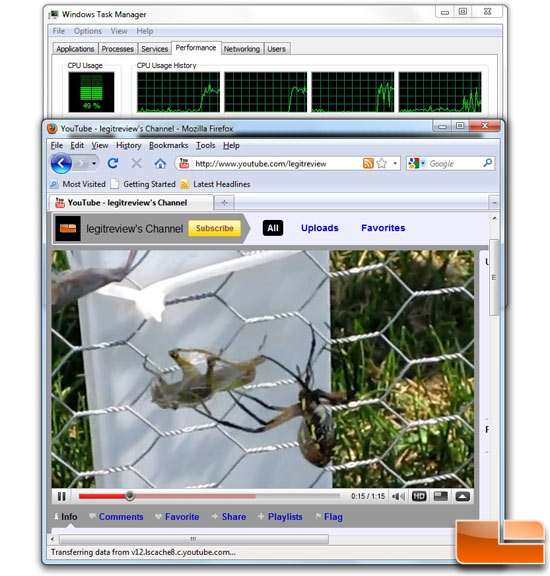 After going to the Legit Reviews YouTube channel I fired up an HD video of a Yellow Garden Spider that I filmed this week and found that it was stutter free in standard definition video mode. I did take notice that the CPU usage was bouncing around 50% though, which just goes to show that the original Intel Atom 230 processor with just a single core and Hyper-Threading would have been running at 100% CPU load just to watch a video on YouTube. 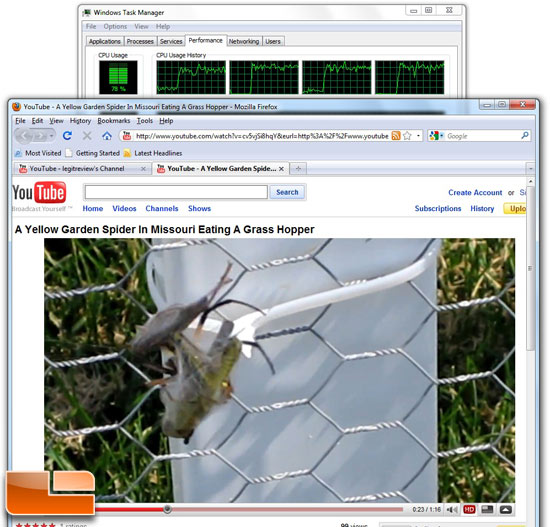 Trying to watch the same video in HD can be done by clicking the HD button on the lower right hand corner and boy did the CPU load increase. The CPU load jumped up to ~80% load by just playing a video in HD on YouTube. This may suprise many of our readers, but it should be noted that the Intel Atom 330 Processor was able to handle the CPU load and video playback was smooth. It would appear that YouTube content playback is fine on this mini-ITX system, so let’s take a look at Hulu HD content. 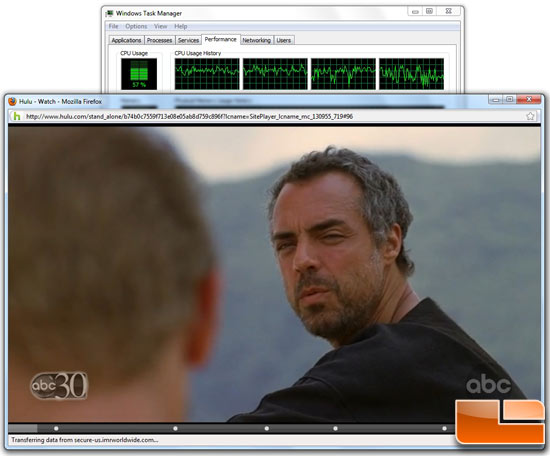 Founded in March 2007, Hulu is co-owned by NBC Universal, News Corp., The Walt Disney Company and Providence Equity Partners. Hulu brings together a large selection of videos from nearly 170 leading content companies, including FOX, NBC Universal, ABC, Comedy Central, ABC Family, Biography, Lionsgate, Endemol, MGM, MTV Networks, National Geographic, Digital Rights Group, Paramount, PBS, Sony Pictures Television, Warner Bros. and more. Users can choose from more than 1500 current primetime TV hits and other popular TV shows and movies. Hulu is similar to YouTube in that it streams content to your computer and it’s very CPU intensive as you can’t use hardware acceleration on these data streams. Since the video card can’t help with the workload it’s all up to the CPU and once again the Intel Atom 330 CPU saves the day and CPU load was right around 60% for most of the playback.