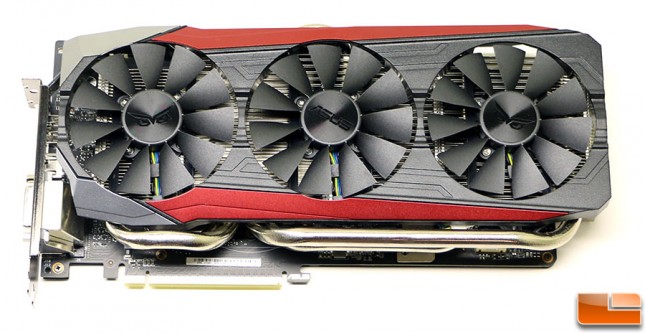 The ASUS STRIX GTX980 Ti 6GB Gaming OC video card features the usual black design with red accents and measures in at 304.8 x 152.4 x 40 mm in dimension. At 12-inches in length this card is fairly massive and you’ll need to ensure that it will fit inside your case properly if you are using anything but a full tower gaming case. This card is also taller than normal, so you also might need to measure that if you have a case fan or something protruding out your side panel. The good news about this dual-slot card is that it actually only takes up two slots! 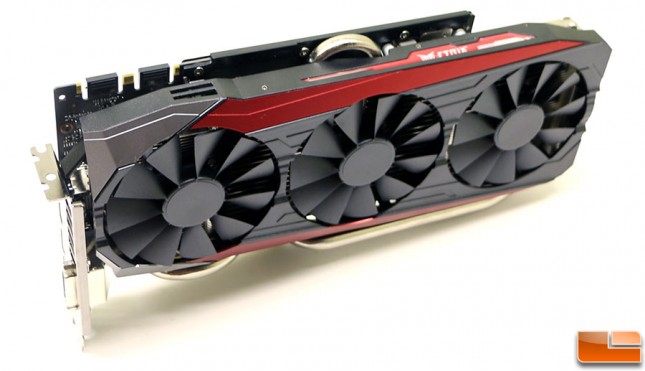 The STRIX GTX 980 Ti Gaming OC has a 14-phase (12+2) Super Alloy II Power design that should give you plenty of smooth power and minimal choke noise. In fact, this card had the least choke noise of the bunch. The ASUS DirectCU III GPU cooler features five copper heat pipes that directly contact with the GPU. Two of these are full length 10mm thick heat pipes that run the length of the heat sink to ensure the fastest transfer of heat away from the GPU. The three wing-blade fans on the STRIX GTX 980 Ti are 0db models, so they’ll only spin up when the card reaches a certain operating temperature. ASUS says that they are quieter than the reference cards cooling fans and deliver 105% more airflow.

In the photo above you can also make out the STRIX LED located on the top edge of the video card. You can enable or disable a pulsating light under the logo to your liking. 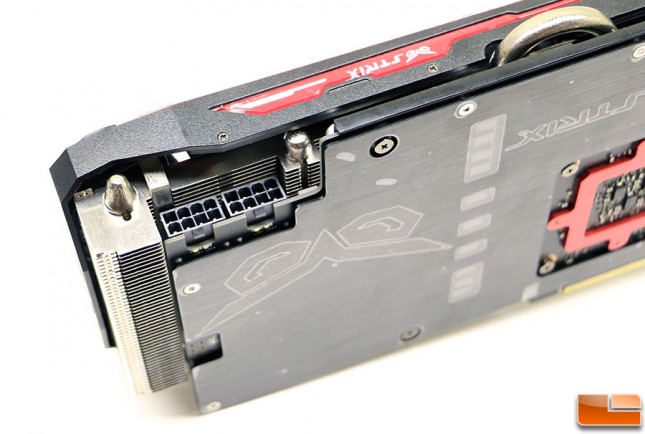 Along the top edge of the ASUS STRIX GTX 980 Ti you’ll find a pair of NVIDIA SLI multi-GPU interconnects for those that might want to combine one or more of these cards together for even greater performance. On the other end of the top edge of the PCB there are two rear-facing 8-pin PCIe power connectors for an additional 375W of power if the card ever needs it. ASUS recommends at least a 600W power supply for their NVIDIA GeForce GTX 980 Ti video card. 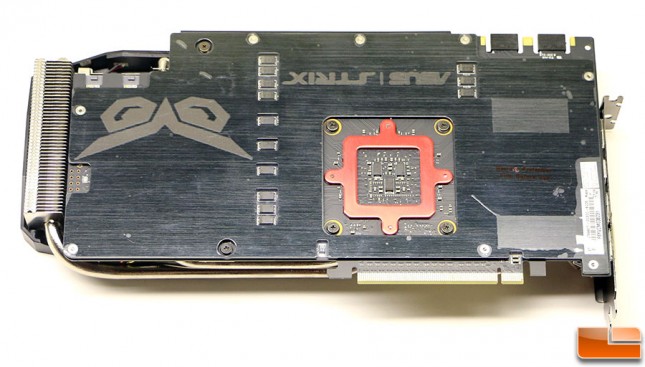 The ASUS GTX 980 Ti 6GB STRIX OC comes with a backplate that helps prevents PCB bending over time. This model includes the STRIX GPU-Fortifier (the red bracket directly behind the GPU), which relieves physical stress around the GPU in order to protect it. 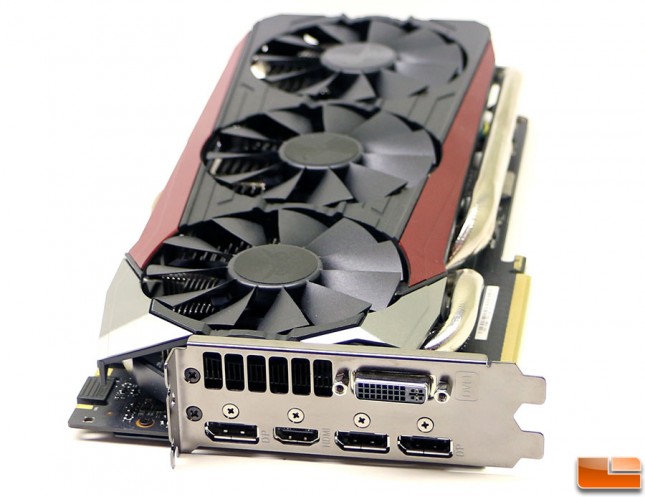 ASUS went with three DisplayPort 1.2 outputs as well as single HDMI 2.0 and Dual-Link DVI-I when it comes to video outputs. ASUS includes a DVI to VGA adapter in the accessory bundle, so the STRIX-GTX980TI-DC3OC-6GD5-GAMING should be able to connect to pretty much any monitor that you own or that is coming out in the years ahead.

Here you can better see the heat pipes that make up the DirectCU III GPU cooler. These heat pipes make direct contact with the GPU to ensure the best possible heat transfer.

Let’s take a look at the MSI GeForce GTX 980 Ti 6GB Gaming OC video card on the next page!