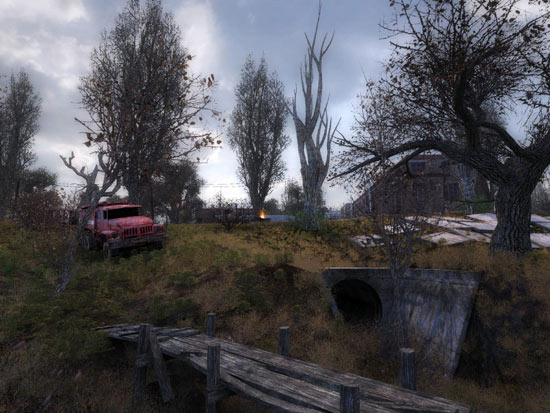 S.T.A.L.K.E.R.: Shadow of Chernobyl uses the ‘X-ray Engine’ to power the graphics. It is a DirectX 8/9 Shader Model 3.0 graphics engine. Up to a million polygons can be on-screen at any one time, which makes it one of the more impressive engines on the market today. The engine features HDR rendering, parallax and normal mapping, soft shadows, widescreen support, weather effects and day/night cycles. As with other engines that utilize deferred shading (such as Unreal Engine 3 and CryENGINE2), the X-ray Engine does not support anti-aliasing with dynamic lighting enabled. However, a “fake” form of anti-aliasing can be enabled with the static lighting option; this format utilizes a technique to blur the image to give the false impression of anti-aliasing. The game takes place in a thirty square kilometer area, and both the outside and inside of this area is rendered to the same amount of detail. 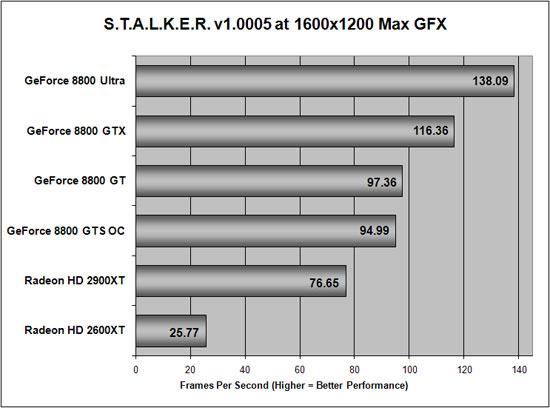 Benchmark Results:At the default 1600×1200 game resolution with full dynamic lighting and maximum quality settings I found that S.T.A.L.K.E.R.: Shadow of Chernobyl was more than playable on nearly all of the video cards. The GeForce 8800 GT placed third in this DirectX 9 game title that was one of the most hyped games early on in the year.