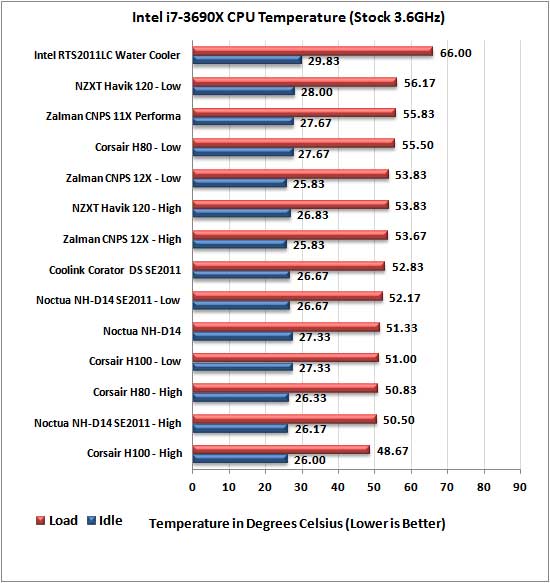 With the Intel Core i7-3960X Extreme Edition processor running at stock frequencies we see a nice temperature spread from the eight CPU coolers that we benchmarked for this review. The overall temperature winner with default CPU settings was the Corsair H100 with a load temp of 48.67*C and at the back of the pack was the Intel RTS2011LC at 66.00*C. It was a bit shocking to see that water coolers were in first and last place, but that is what happened here today. The good news is that all of these coolers did a superb job keeping the Intel Core i7-3960X processor cool. The maximum temperature or TJ Max for the Intel Core i7-3960X is 91C, which is the point at which the CPU will start to throttle down due to extreme heat in order to protect the CPU and the motherboard. As you can see, none of the coolers are close to hitting that number.

The best performing air cooler was the Noctua NH-D14 SE2011 with a temperature of 50.5*C at load. The best performing water cooler was the Corsair H100 with a temperature of 48.67*C, which was less than a half a degree cooler than the Corsair H80 and 2 degrees warmer than the Corsair H100. The Noctua NH-D14 is significantly quieter than the H80 or H100 at full speed and performs at roughly the same level, which is great to see for an air cooler. The fan for the CNPS11X Performa was the most impressive when it came to noise, though; at 26dBA it was hard to make out over the case fans in our test system.

The difference between the best and worst performing CPU coolers was
just over 35% or ~17.3*C. This is a rather large difference and one we are happy to see as we hoped that a CPU cooler roundup would be helpful in purchasing decisions. Keep in mind costs as the gap between the Zalman CNPS11X and the Corsair H100 is only 7
degrees, not bad for a little air cooler that is 1/3 the cost. 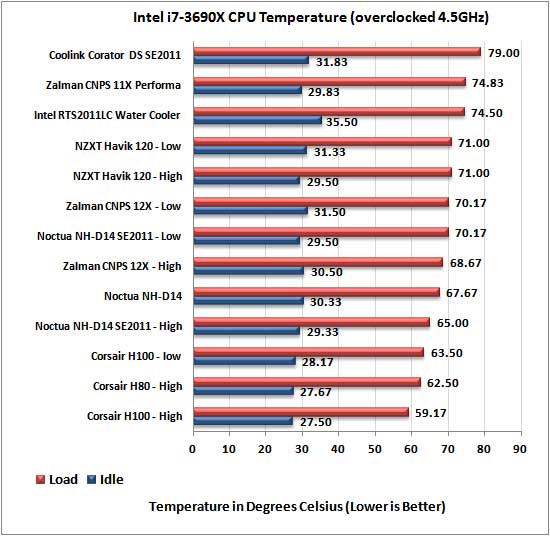 With the Intel Core i7-3960X Sandy Bridge-E CPU overclocked up to 4.5 GHz we found the load temperatures significantly increase across the board and a number of the CPU coolers changed places in the chart. The best performing CPU Cooler remained the Corsair H100 at 59.17*C and the worst of the bunch was the Coolink Corator DS SE2011 at 79.0*C. The difference between the two coolers was 19.86*C, which is a larger performance gap than what we saw with stock clock frequencies. The good news here is that all the cooling solutions are keeping the processor below the rated TJ Max of 91*C.

The temperature gap between the Corsair H80 and the Noctua NH-D14 grew a couple of degrees and the Corsair H80 pulled ahead of the Noctua NH-D14, coming in at 62.5*C, but the NH-D14 is still much quieter. The Zalman CNPS11X Performa is second to last, coming in at 74.83*C, slightly behind the Intel RTS2011LC water cooler that costs twice as much and isn’t as quiet. The Corsair H100 is again at the top of the charts coming in at 59.17*C. Even on low it is ahead of the mighty NH-D14 by a degree and half! The biggest mover on the chart was the Coolink Corator DS SE2011, which fell to last place, but was in the middle of the pack at stock speeds. The Coolink Corator DS SE2011 has just a single 120mm cooling fan on it and we are likely seeing what happens by lack of sufficient airflow. Looking at the chart again that makes sense as only three coolers have a single 120mm fan on them (Coolink Corator DS SE2011, Zalman CNPS 11X and Intel RTS2011LC) and they just happen to be the three hottest coolers in this chart. It looks like there is a real reason to have more than a single fan on a CPU cooler these days!