For general performance testing, we will take a look at a few benchmarks that evaluate the system more from a memory and CPU viewpoint, rather than a GPU viewpoint. Of course, this doesn’t mean the GPU isn’t tested with these benchmarks, it is just not a key factor. 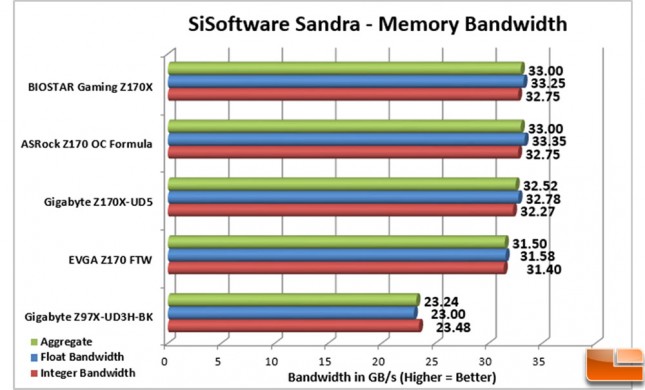 The BIOSTAR Gaming Z170X wasn’t able to push the Kingston Fury memory beyond it’s default 2666MHz speed, however the timings had to be a bit looser than the others at 15-20-20-35-2T instead of the standard 15-17-17-35-2T. The Sandra Memory Bandwidth shows that the Kingston Fury DDR4 kit received an average score of 33.0GB/s, which places almost right at the top of the Z170 pack, just a little below the ASRock Z170 OC, which actually had a slightly higher than normal clock speed, with the tighter 15-17-17-35-2T. As we weren’t able to overclock the memory, we will have to use this speed during all further testing. 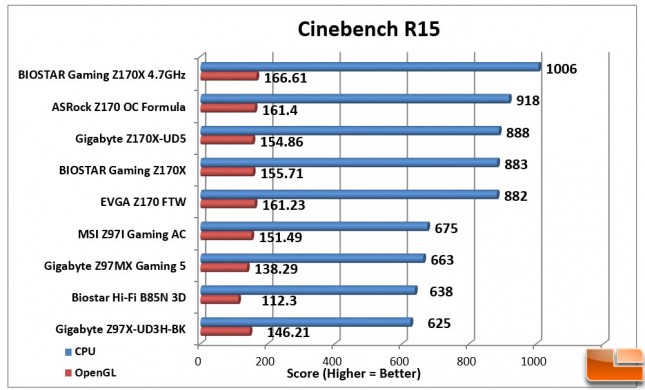 Cinebench R15 tests both CPU and GPU performance, we have used the same GPU across all the motherboards included in this test. The difference comes down to CPU, motherboard and memory. The BIOSTAR Gaming Z170X received an average score, for both the CPU and OpenGL tests. When the motherboard was overclocked to 4.7GHz, the performance increased by just under 14%. 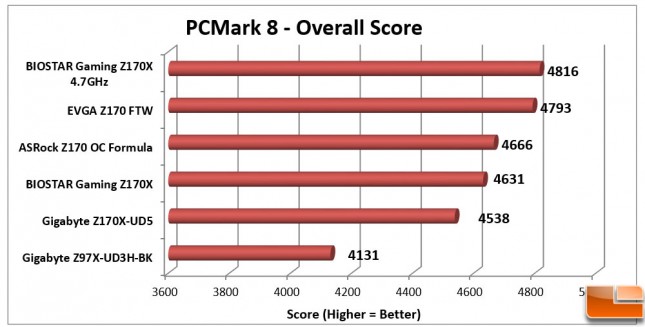 The PCMark Home Advanced test evaluates the system with tasks that a typical home user might do, which includes typing, web browsing, video conferencing and casual gaming. PCMark shows the BIOSTAR Gaming Z170X performing around 2% better than the lowest Z170 motherboard, and when overclocked, that increased the performance of the BIOSTAR Gaming Z170X by around 4%. 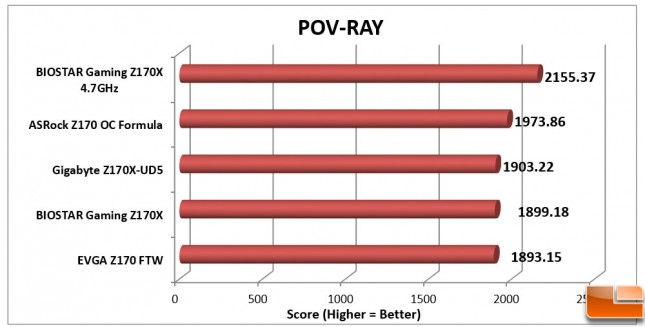 POV-RAY evaluates the system basing it’s score on how well the CPU performs. The BIOSTAR Gaming Z170X performed slightly better than the EVGA Z170FTW, and about 4% lower than the ASRock Z170 OC Formula. Of course, when the BIOSTAR Gamign Z170X was overclocked, it’s performance increased by 13.4%. 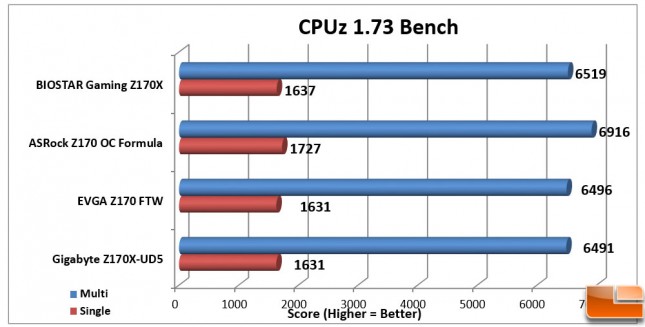 CPUz introduced a benchmark with their utility in 1.73, and have recently updated it. As the update severely affected the scores we have kept the 1.73 scores for this test, and will utilize 1.74 scores going forward. the BIOSTAR Gaming Z170X performed the 2nd best of the Z170 motherboards we have tested.

Benchmark Results: The BIOSTAR Gaming Z170X is an average performer even with the memory not running as fast at the other test systems. Once it is overclocked, it performs like you would expect, and outperforms the other non-overclocked systems. The overclock testing shows a gain in performance typically between 10% and 15% from it’s base rated speed with just the CPU overclocked.