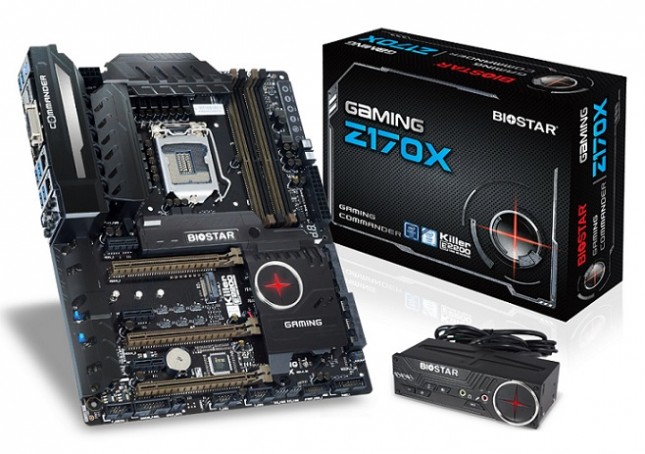 Depending on the specific features, there are multiple chipsets that support the Intel Socket 1151 processors, the Z170, H170 and B150. Biostar has motherboards that support all three of these chipsets, with the Z170 chipset being the main enthusiast grade chipset. For the Z170 chipset, Biostar has four motherboards that offer a range of features. Their flagship model is the BIOSTAR Gaming Z170X Ver 5x.

In addition to using Intel’s latest Skylake processor, the BIOSTAR Gaming Z170X supports 3-way AMD CrossFire (no support for NVIDIA SLI unfortunately), 2 SATA/PCIe 32Gb/s M.2, 6 SATA 6Gb (3 SATA Express), USB 3.0 and USB 3.1 Type-C. The BIOSTAR Gaming Z170X is available through BIOSTAR’s eBay store for $199.99 plus shipping. While some might prefer to purchase through a major retailer, there are some advantages through purchasing directly from the manufacturer, removing the middle-man, and making warranty easier, which is provided by BIOSTAR for 2 years.

Having button on the motherboard to control power, reset, and various overclocking features isn’t new. It’s been done many times in many different ways. BIOSTAR has moved away from the traditional buttons, and integrated a touch panel with various buttons. These buttons include Power, Reset, BLCK – / +, and CPU Ratio – / +. There are also a few physical buttons used for enabling XMP and doing a BIOS clear.

After a brief look at the BIOSTAR Gaming Z170X retail package, we’ll take a closer look at the motherboard and get to installing it.