The Intel i7-6700K processor has a base clock speed of 4.0GHz, we have successfully run it at 4.9GHz with a small voltage increase to 1.43V. However, the average overclock on this specific configuration has been 4.7GHz. The Kingston Fury DDR4 memory kit has also been overclocked from it’s based speed of 2666MHz to a maximum of 3000MHz on one test system, while the average overclock on the Kingston Fury has been 2900MHz.

Enabling Overclocking on the BIOSTAR Gaming Z170X is fairly easy, however the wording can be a little confusing if you’re not well versed in overclocking. On the O.N.E menu, you enable overclocking with the CPU Ratio Mode, here you can select Per Core, All Cores, or Fixed, each one will give a slightly different overclocking option. The “Per Core” option allows you to set the CPU Frequency Ratio per core, while the All Cores and Fixed do pretty much the same thing, setting it across all the cores. 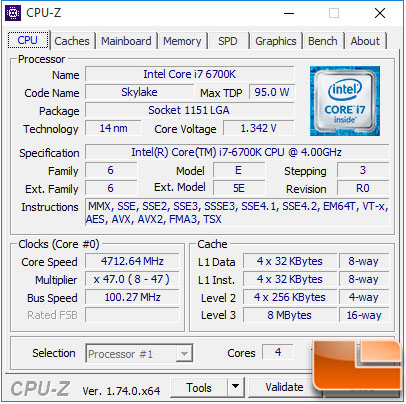 Standard overclocking process is to start with a fairly low setting and slowly increase from there. Without knowing exactly what the BIOSTAR Gaming Z170X is capable of, we started with 4.3GHz, and ran several benchmarks to validate stability. Once that was achieved, the CPU Frequency Ratio was increased. At 4.6GHz we began to experience slight instability while running the benchmarks, so we begin increasing the voltage. 4.7GHz became stable at 1.40V, which has been a very common overclock with this particular configuration. This is a very easy overclock, without doing any fine tuning. BIOSTAR offers a wide range of other tweaks that you can perform to push the system further.

So bottom line, the BIOSTAR Gaming Z170X is an average overclocking motherboard, with limited memory overclocking.