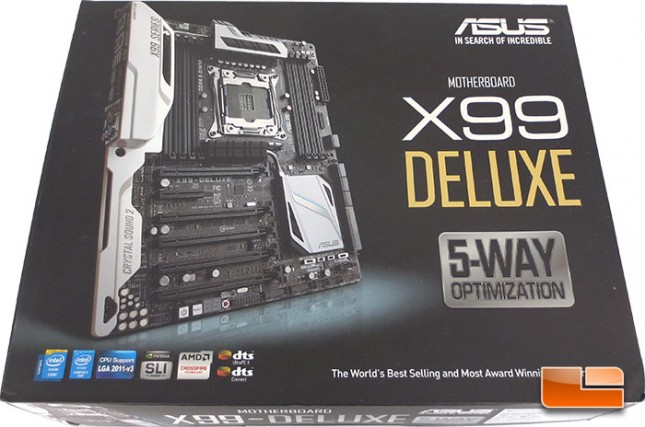 The retail packaging for the ASUS X99-Deluxe is pretty much straight to the point. There is no flashy graphics to catch ones eyes, simply the branding and a shot of the motherboard. Of course ASUS does want to emphasize some points with the packaging, as they are some key points. The features like 5-way optimization, NVIDIA SLI, AMD CrossFire, Dolby DTS, and of course the Intel X99 Chipset and LGA2011-V3 socket are what make up a good chunk of the boards core so they are certainly worth pointing out right off the bat! 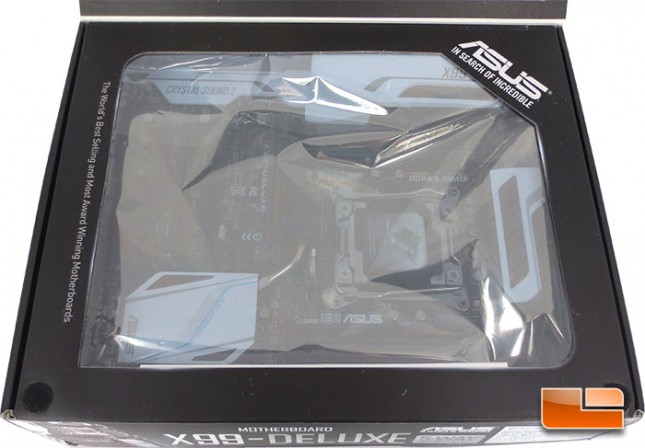 The ASUS X99-Deluxe packaging features a front cover the lifts up to reveal the board underneath. The traditional anti-static bag the X99-Deluxe motherboard is wrapped in doesn’t lend itself well to photographs, but this is our first glimpse of the first Intel X99 motherboard to come across the Legit Reviews test bench! 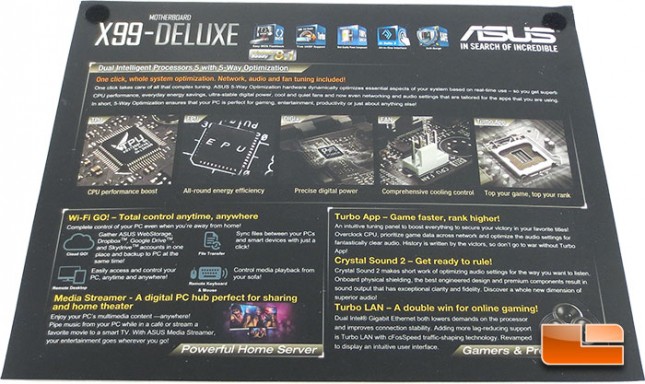 Inside the front cover of the ASUS X99-Deluxe packaging that lifts up, there is no shortage of marketing text. On the inside cover ASUS goes into some of the detail about a number of the features that make up the ASUS X99-Deluxe motherboard. Aside from the obvious Intel upgrades, ASUS is launching their new Dual Intelligent Processors 5 with 5-way optimization, which is detailed on the top half of the cover above. The bottom half of the cover, goes into details about a number of other features such as the Wi-Fi GO!, Media Streamer, Turbo App, Crystal Sound 2, and the Turbo LAN. 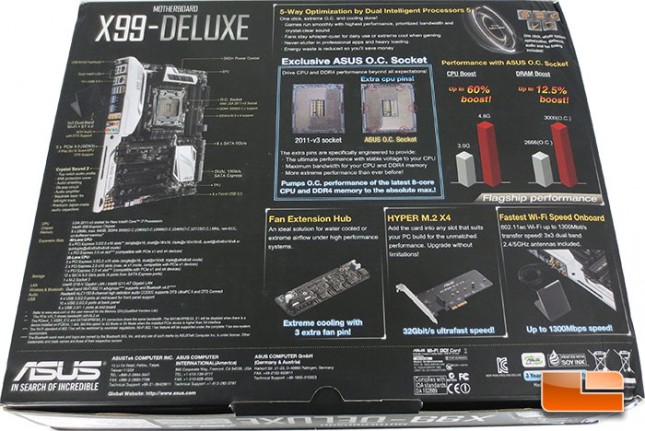 Flipping the retail packaging for the ASUS X99-Deluxe over, the first feature that ASUS talks about is the Dual Intelligent Processors 5, noticing a pattern. ASUS has put a lot of work into the latest iteration of the Dual Intelligent Processors and they are certainly proud of it. ASUS is also focusing on the exclusive ASUS O.C. Socket. The ASUS O.C. Socket features a number of extra pins that are specifically engineered to provide the ultimate performance with stable voltage to your CPU, maximum bandwidth for your CPU and DDR4 memory, and more extreme performance than ever before. Along the bottom, there are a couple of included extras that we will look at down the page, but they include a fan extension hub, Hyper M.2 x4 expansion card, and the antenna for the 802.11ac Wi-Fi. 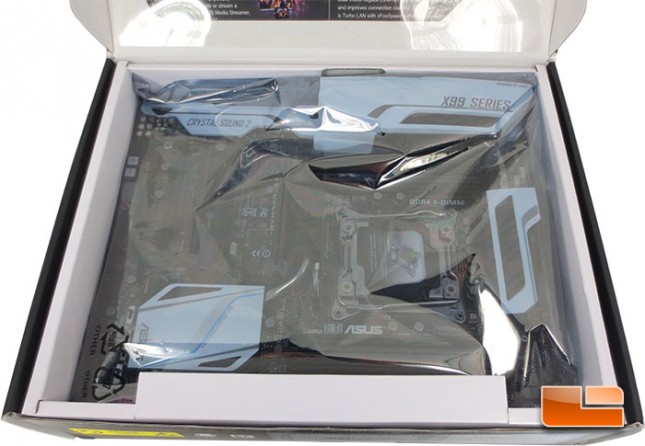 Opening up the retail packaging for the ASUS X99-Deluxe we are once again presented with X99-Deluxe wrapped in the ever impressive anti-static bag. What’s worth mentioning here, there is very little space around the edges of the board which means that it won’t be moving around during shipping. 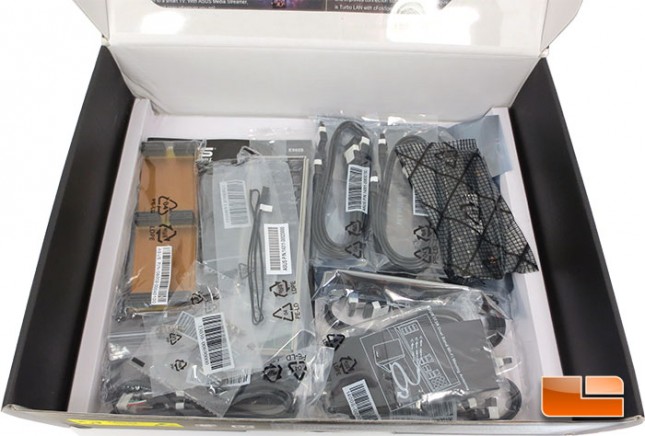 The bundle that comes with the ASUS X99-Deluxe is in a bit of a jumble below the motherboard. Fortunately there is a layer of cardboard separating the bundle and board so there won’t be any issues. 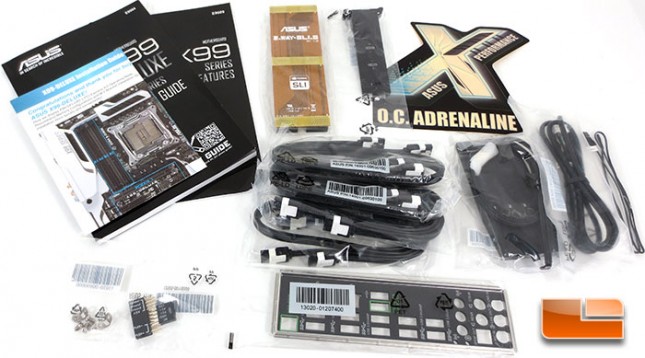 The bundle that comes with the ASUS X99-Deluxe is pretty impressive. The bundle includes the usual suspects like manuals, driver disc and I/O shield. Though it also includes four pairs of SATA III cables for a total of eight, ASUS Q-Connects, Wi-Fi Go! antenna, 3-Way SLI Bridge, temperature probe, & some cables for the fan extension hub. To the left of the ASUS O.C. Adrenaline sticker is some mounting hardware for the M.2 socket. ASUS is using a vertical mounting M.2 socket on the ASUS X99-Deluxe that will save space on the board. 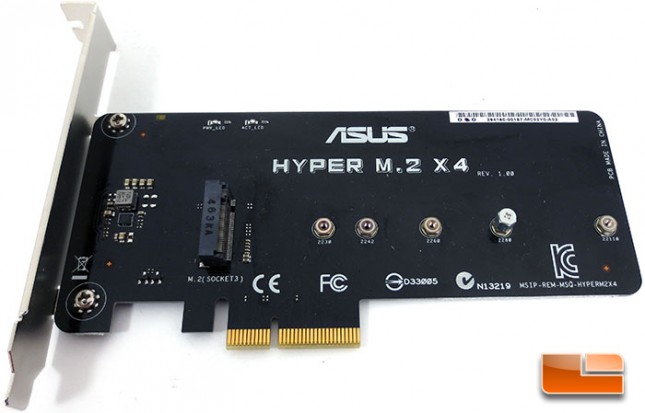 The fan expansion card will support up to an additional three fans on for some serious amounts of airflow. The three fans draw power off a four pin molex connector