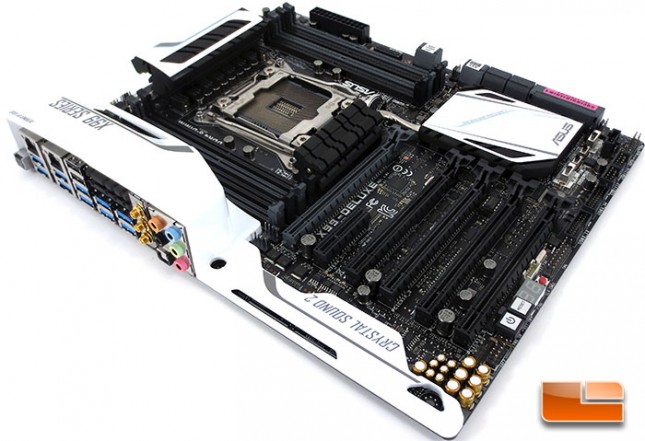 The ASUS x99-Deluxe is the first of the Intel X99 motherboards to come across my test bench. I’m pretty confident that the X99-Deluxe set the bar for the rest of the Intel X99 motherboards pretty darn high! The ASUS X99-Deluxe is hitting the streets with a suggested retail price of $399, which at first glance seems a touch high, but keep in mind the Intel i7-5960X is retailing for $999! By comparison $399 doesn’t seem so high now!

The gaming performance of the ASUS X99-Deluxe didn’t wow me like I had hoped it would, but using the ASUS Direct CUII GeForce GTX 670 I didn’t expect to much to change. All three of the current generation of systems are pretty stout for gaming with the GTX670. Though looking at Futuremark 3DMark Firestrike, the Physics score is quite a bit different between the various systems. The ASUS X99-Deluxe hit a physics score of 17024 while the Intel Core i7-4770K hit 11221! That’s a difference of nearly 52%! Once games begin to require more cores, the X99-Deluxe and i7-5960X will excel for gaming.

While the ASUS X99-Deluxe didn’t crush the competition when it comes to gaming, there are some benchmarks that it definitely excelled at! Pretty much anything that would take advantage of each and every thread on the Intel Core i7-5960X, the ASUS X99-Deluxe dominated in. Taking a look at the results in the X264 HD Video encoding benchmark really emphasize the power that the new Intel X99 platform has! 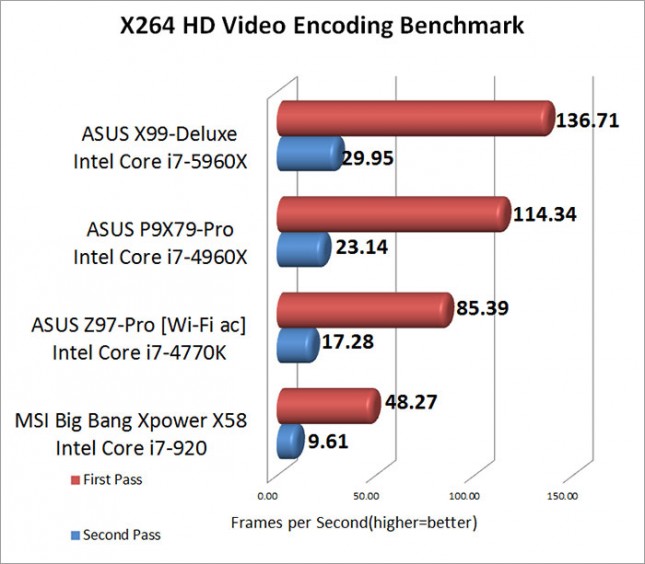 The ASUS X99-Deluxe and Intel Core i7-5960X was 20% faster than the i7-4960X on the first pass, and 29% faster on the second pass which is considerably more processor intensive!

It should come as no surprise that using the ASUS X99-Deluxe to overclock the Intel Core i7-5960X Extreme Edition processor was simply a joy. I have personally come to love the ASUS UEFI BIOS and find that it is one of the easiest to use overall. I was a little disappointed to find that I was only able to overclock the i7-5960 to 4.4GHz, but then again this is the first time out for this chip. 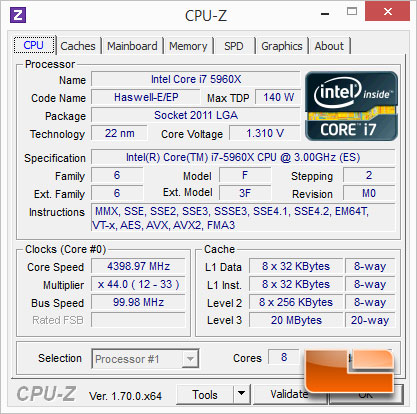 While I’ve become pretty solid at overclocking there is going to be a bit of a learning curve on the Intel X99 platform. 4.4 may simply be the maximum that this particular processor is capable of, but as time goes on I will become a little more familiar with the intricacies of the X99 platform and hopefully squeeze some more out of the processor!

ASUS motherboards are considered by many to be some of the most reliable out there, but should you ever need it, ASUS does back up their motherboards with a solid warranty. The ASUS X99-Deluxe is backed by a three year warranty which is based off of the serial number. The ASUS x99-Deluxe Intel X99 motherboard is hitting the streets with a retail price of $399, which was one of the lower cost components that I used today! The Intel Core i7-5960X is hitting the streets with a $999 price tag, and the Crucial DDR4 memory kit (CT4K8G4DFD8213) I’m using has a MSRP of $519.99! When you’re building an extreme system, you’ll have to have a big budget!

Legit Bottom Line: The ASUS X99-Deluxe is nothing short of the quality that I have come to expect from ASUS! The X99-Deluxe was incredibly easy to use, and was rock solid through out my testing and of course it has the performance of the new Intel X99 chipset and Haswell-E processors at it’s fingertips!