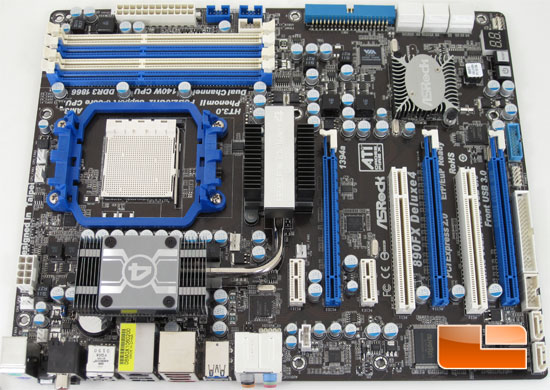 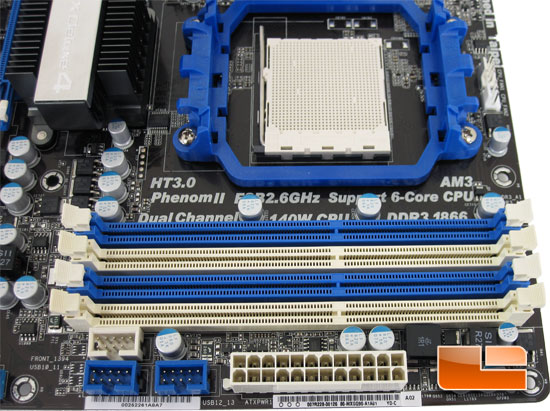 The ASRock 890FX Deluxe4 has the same memory support as the ASRock 890GX Extreme4, 1866MHz (OC) and a maximum of 16GB of memory. To the left of the 20+4 pin power plug is a pair of USB2 Headers (blue) and a header for front panel Firewire (white). 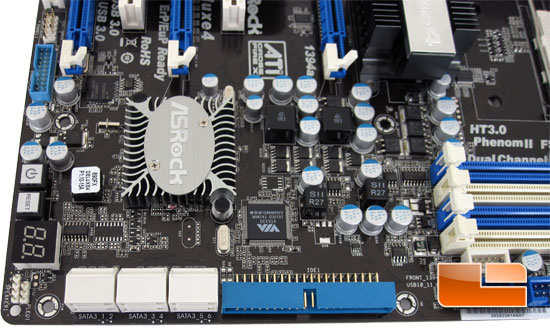 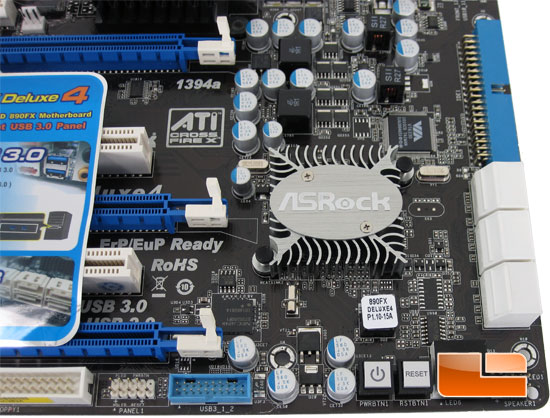 Rounding the corner of the ASRock 890FX Deluxe4 we have several features here that are worth mentioning. On the right side of the above image is the Dr. Debug LED with the on board power and reset buttons next to it. Above the on board buttons are the CMOS chip and the heatsink that will keep the AMD SB850 cool. There is also what I consider to be the key feature of the ASRock 890FX Deluxe4 motherboard: the onboard header for the Front Panel USB3. Next to the USB3.0 Header is the pin out for the front panel. 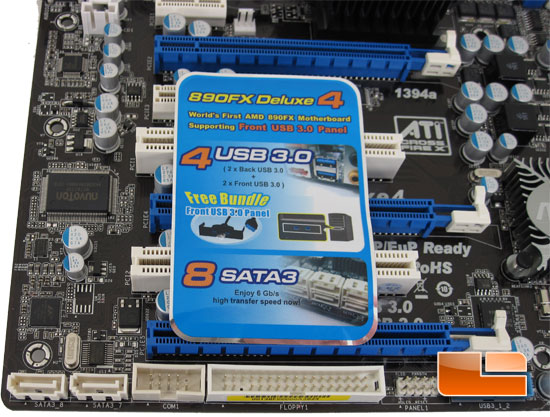 Next to the front panel pin-out is the header for the floppy disk and the serial port beyond that. On the corner of the ASRock 890GX Deluxe4 is the final pair of SATA3 ports which gives us our grand total of eight SATA3 ports on the ASRock 890FX Deluxe4.

In the above photo we see the layout of the expansion slots on the ASRock 890FX Deluxe4, as well as a number of the individual microchips that make the ASRock 890FX Deluxe4 the board that it is. The chip next to the audio jacks is the Realtek ALC892 HD Audio chip. The larger chip near the center of the image is a Nuvoton NCT6775F; this is a super I/O chip that supports serial port interface, parallel port interface, FDC, PS/2 interface, GPIO, hardware monitoring functions and more. The smaller chip just above the audio jacks is the NEC USB3.0 controller chip.

The ASRock 890FX Deluxe4 has a total of eight USB ports at the rear I/O panel, two of which are Super Speed USB3 (blue). We also have a PS/2 port for both a mouse and a keyboard, a clear CMOS Button, coaxial and optical S/PDIF outputs, e-SATA, firewire, and a RJ-45 port which is controlled by a Realtek RTL8111E chip which will operate at gigabit speeds. 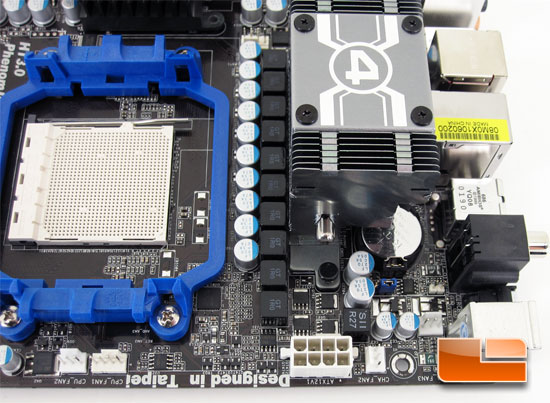 The ASRock 890FX Deluxe4 will support all current AMD socket AM3 processors including the new Hex-Core Phenom II’s, and can support up to a 140Watt TDP. The CPU will be able to draw plenty of power thanks to the 8-pin power plug. Up in this corner is also where you will find the Clear CMOS jumper and the battery. This isn’t the easiest place to use the CMOS jumper if you are using your fingers. It does get rather tricky when the ASRock 890FX Deluxe4 is installed inside of a case. Fortunately, there is the Clear CMOS button on the rear I/O panel if it is ever needed.