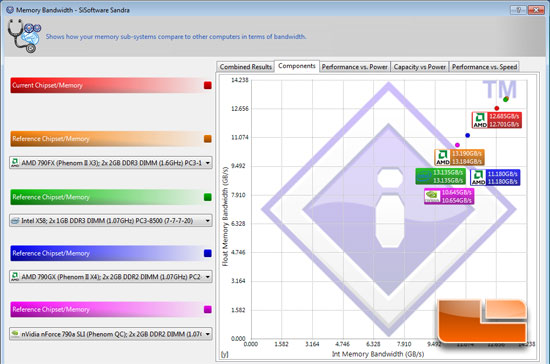 The Sisoft Sandra 2010 benchmark utility was released a few weeks ago and we have started to include it in our benchmarking. Sandra 2010 now comes with support for Virtualization (Virtual PC/Server, Hyper-V, VMware) and GPGPU (OpenCL, DirectX 11 Compute Shader/DirectCompute). Today we will be utilizing Sandra 2010 to look at memory bandwidth performance! 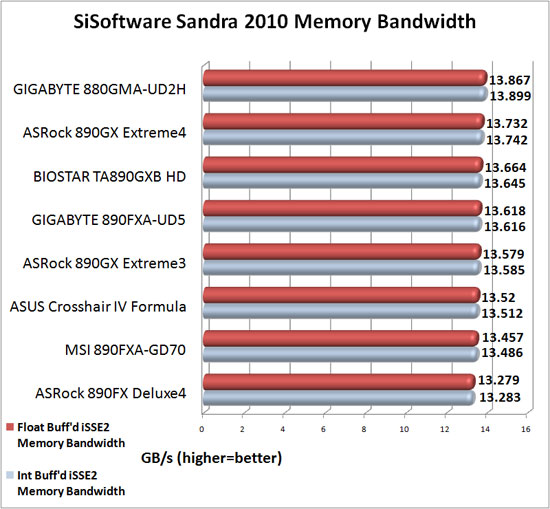 Benchmark Results: The SiSoftware Sandra 2010 Memory Bandwidth benchmark is an interesting set of scores. For the most part the results seem to coincide with the chipset that the board is running. The AMD 880G has so far outperformed both the AMD 890FX chipset and the AMD 890GX chipset. When looking at the results of the AMD 890GX chipset boards, the ASRock 890GX Extreme4 took the top spot. When we look at the AMD 890FX chipset board which, for the most part, has lower memory bandwidth than any of the AMD 8XX chipsets (that have come across my bench), the ASRock 890FX Deluxe4 took up the bottom spot and had the lowest bandwidth of any of the boards today.