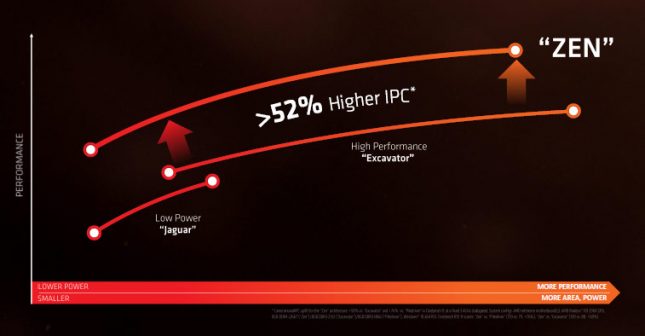 With AMD’s Zen microarchitecture used on Ryzen processors, AMD has been able to get greater than a 52% IPC improvement over AMD’s previous desktop design. This is thanks to a 1.75x larger instruction scheduler window, a 1.5x grater issue width and resources as well as a new micro-op cache that allows the L2 and L3 cache to be bypassed with frequently-accessed micro operations. To top that off, AMD came up with a great SMT and even made a neural network-based branch prediction unit to prepare the right instructions and pathways are being used on future workloads.

The AMD Zen architecture is comprised of what they call a CCU Complex (CCX), which is a 4-core, 8-thread module. AMD can place more than one of these CCX units together on a package, which is exactly what AMD did to get the 8-core, 16-thread processors in the Ryzen 7 processor series. Each CCX has 64K L1 I-Cache, 64K L1 D-Cache, 512KB dedicated L2 cach per core and then finally 8 MB of L3 cache shared across all the cores. In processors where more than one CCX is used, AMD connects the CCXes together with their high-speed Infinity Fabric (this fabrid also handles system memory, I/O, PCIe and more). From what we have heard AMD has been tinkering around with connecting up to four of these complexes together, so at some point in the future a 16-core, 32-thread processor is entirely possible and likely going to make its way to the desktop market when the time is right.

Each AMD Ryzen processor features AMD SenseMI technology, which is basically a ton of interconnected sensors that are accurate to 1mA, 1mV, 1mW and 1C with a pooling rate of 1000/sec that allows for real time adjustments to the processors behavior. This data allows for improved power use of the cores, management of the speculative cache fetches and even to perform AI-based branch prediction. 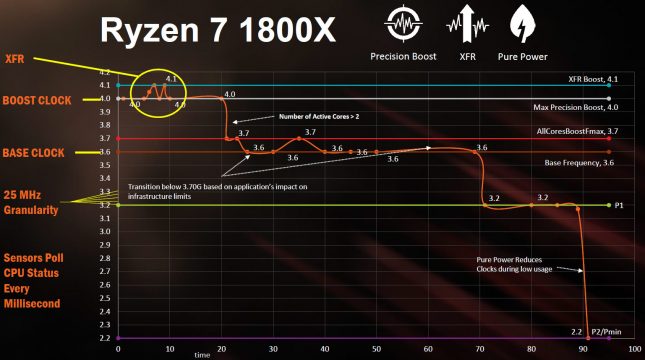 Thanks to the real time power, temperature and load data from the Infinity Fabric, AMD precision boost can adjust the processors clock speeds on the fly in 25MHz steps. This ‘fine’ clock tuning means that you are able to stay at the highest possible clock speed for that particular workload. AMD also has a new feature called Extended Frequency Range (XFR) on all Ryzen processors that have the -X suffix at the end of the model number. 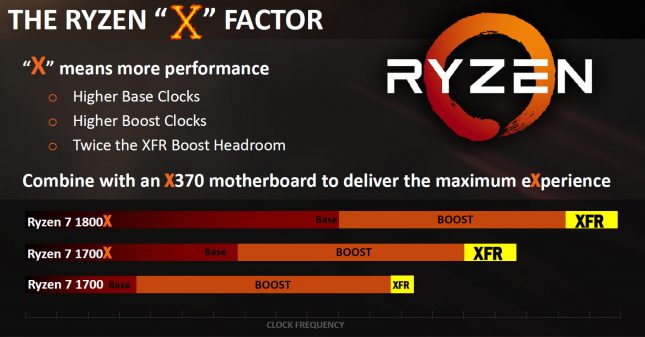 XFR increases the maximum Precision boost frequency on systems that are using high-end CPU cooling solutions (think high-end air cooling or most any liquid cooling loop). This additional headroom is given automatically thanks to the SenseMI data that allows the processors distance to the pre-set junction thermal limits and giving you additional clock frequency when you have some headroom available.

What is the rough temperature threshold/range at which XFR kicks in?

What is the rough temperature threshold at which XFR remains stable at 4.1GHz (e.g. no more “dithering” between 4.0/4.1)?

Roughly 25C Tj but that will depend on the heatsink performance and the system ambient temperature and the workload being run.