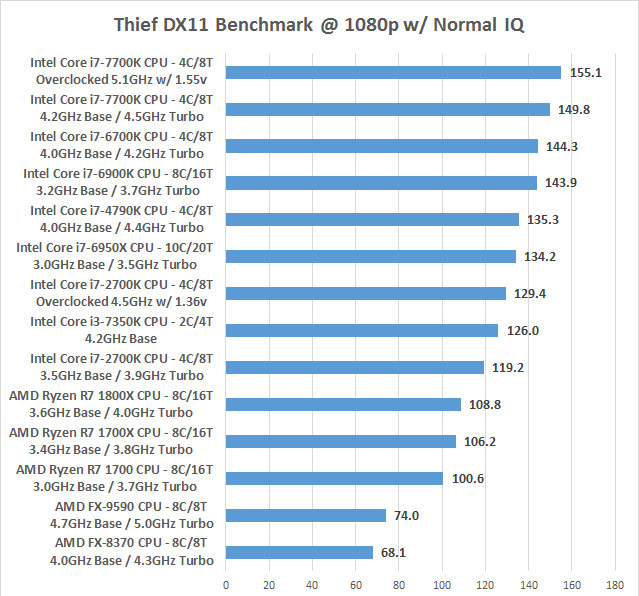 Grand Theft Auto V, currently one of the hottest PC games, was finally released for the PC on April 14, 2015. Developed by Rockstar, it is set in 2013 and the city of Los Santos. It utilizes the Rockstar Advanced Game Engine (RAGE) which Rockstar has been using since 2006, with multiple updates for technology improvements. We picked this game title for CPU testing as it is known to scale well with CPUs. We use the games built-in benchmark and test with the default settings with these changes; vSync off, 1920 x 1080, 60Hz. 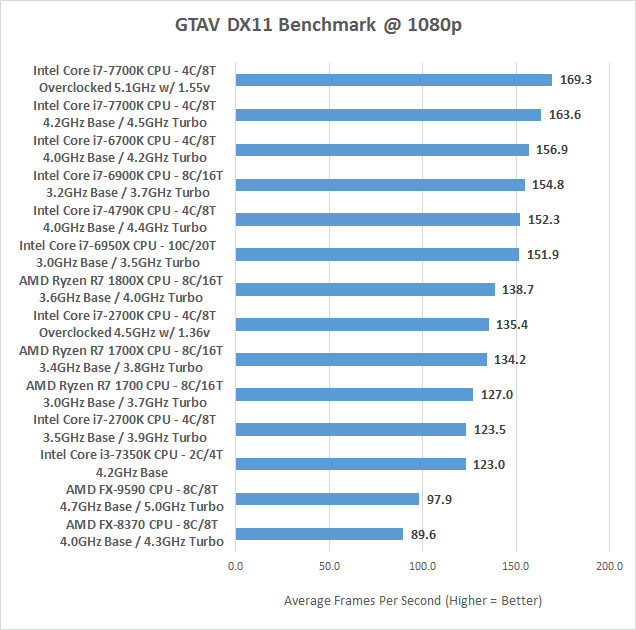 Discrete Gaming Benchmarks Results Summary: On the three game titles we tested with, the AMD Ryzen 7 1800X showed somewhat disappointing results. In Thief at 1920 x 1080 with Normal image quality settings and VSync disabled we were averaging 108.8 FPS. This score was 47% faster than the ‘old’ flagship AMD FX-9590 5GHz processor, but was 38% slower than a stock Intel Core i7-7700K ‘Kaby Lake’ processor. Ryzen 7 processors in general fall 15% short in IPC versus Kaby Lake, but this is a larger performance drop than we expected.

In Deus Ex: Mankind Divided we are looking at CPU performance on a DX12 game title, so we expect the results to be tighter since there is less of a burden on the CPU since DX12 reduces the CPU overhead. On this game title the Ryzen 7 1800X was found to be 22% faster than the ‘old’ flagship AMD FX-9590 5GHz processor, but was 22% slower than a stock Intel Core i7-7700K processor. This is more where we expected the performance to be with Ryzen in game titles.

AMD made it clear to use that they don’t expect to win in game benchmarks. Our results show that they don’t, so we are happy that they didn’t make any false claims here. AMD thinks that they have become competitive for gamers though as they’ve moved the system bottleneck with regards to gaming from the CPU back to the graphics card. AMD furthermore noted that they think most gamers that are buying a $300+ processor will be gaming at higher than a 1920 x 1080 screen resolution. Once you move to a 1440P or 4K display they feel that the performance difference between Intel and AMD isn’t unreasonable as you’ll again be more GPU limited due to the screen resolution rather than CPU limited. Here are some slides that show AMD’s internal results:

All that said, AMD belives that they can improve the low 1080P performance numbers with game engine optimizations and provided these statements for us from game developers;

Oxide games is incredibly excited with what we are seeing from the Ryzen CPU. Using our Nitrous game engine, we are working to scale our existing and future game title performance to take full advantage of Ryzen and its 8-core, 16-thread architecture, and the results thus far are impressive. These optimizations are not yet available for Ryzen benchmarking. However, expect updates soon to enhance the performance of games like Ashes of the Singularity on Ryzen CPUs, as well as our future game releases. – Brad Wardell, CEO Stardock and Oxide

“Creative Assembly is committed to reviewing and optimizing its games on the all-new Ryzen CPU. While current third-party testing doesnt reflect this yet, our joint optimization program with AMD means that we are looking at options to deliver performance optimization updates in the future to provide better performance on Ryzen CPUs moving forward. ” Creative Assembly, Developers of the Multi-award Winning Total War Series

Let’s take a look at 1440P and 4K results on the game titles that we tested on the next page.