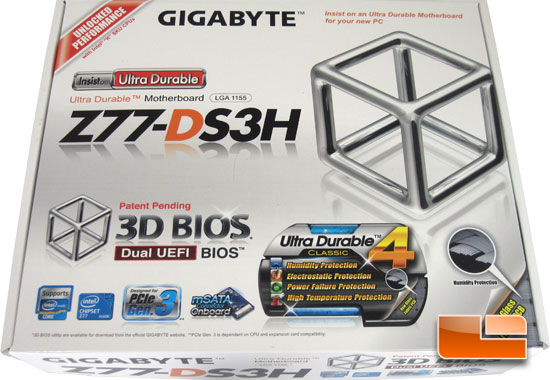 The front of the retail box for the GIGABYTE Z77-DS3H gives us all the basic information that we need about the motherboard. From strictly the information on the package we can see that it supports the latest 22nm processors from Intel, PCIe Gen 3 graphics cards, an mSATA port, and it is part of the GIGABYTE Ultra Durable 4 line of products. 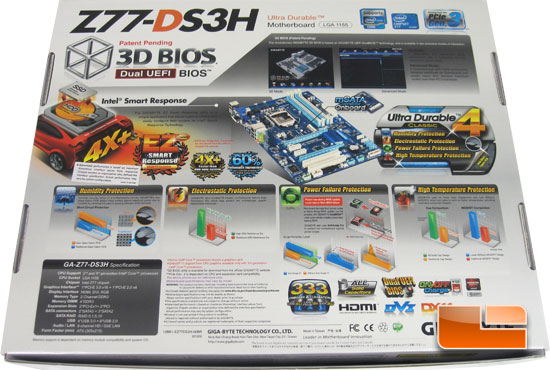 The back of the retail packaging breaks down the features and gives us some very detailed information about the GIGABYTE Z77-DS3H. 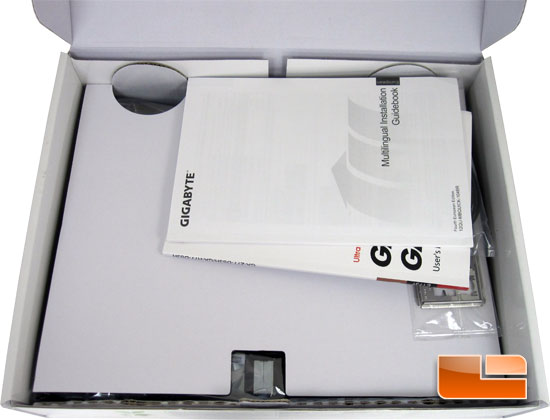 Much like our previous two motherboards today, the GIGABYTE Z77-DS3H looks to have a rather light bundle that is separated from the motherboard by a protective layer of cardboard. 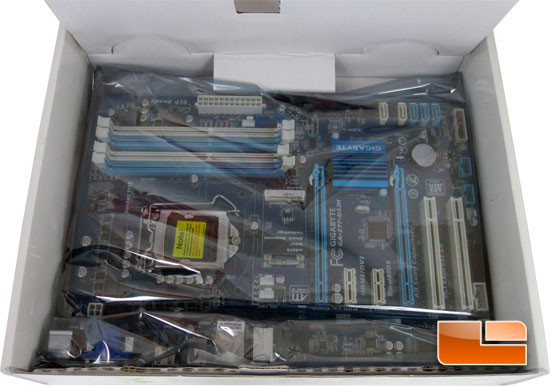 Removing the cardboard and bundle gives us a mildly obscured look at the GIGABYTE Z77-DS3H Intel Z77 motherboard. 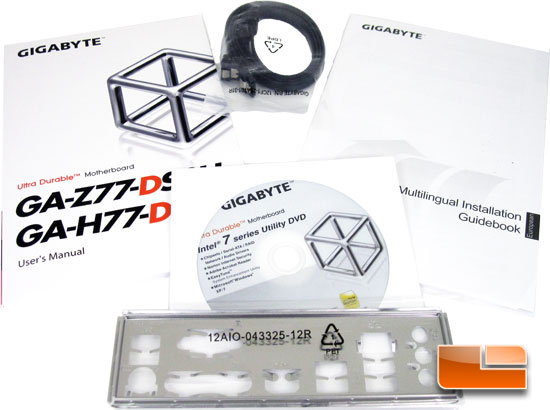 There isn’t much to say about the GIGABYTE Z77-DS3H bundle. All that is included is a pair of SATA cables, user manual, multilingual installation guidebook, I/O shield, and a driver disc. 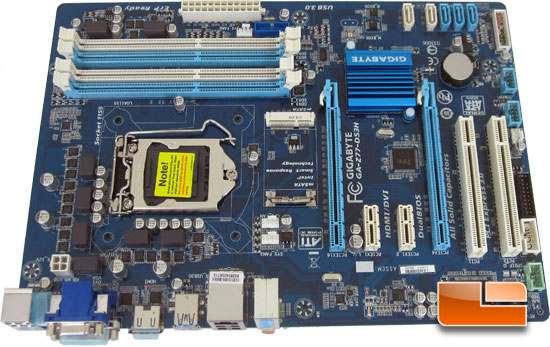 Between all of the GIGABYTE color combinations, this isn’t my favorite. I have become partial to the blacked out look of their high end boards. Though that’s just my preference, and everybody likes different looks. A couple of items stand out to me after looking at our other boards today. First and foremost, there is no heatsinks on the CPU power delivery circuitry. I also noticed right off the bat that there is a mSATA port next to the Intel LGA1155 socket. 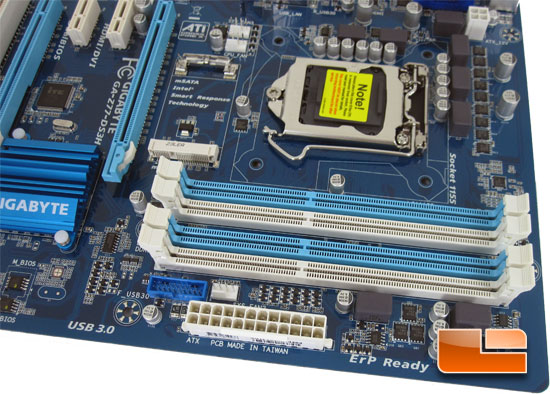 The GIGABYTE Z77-DS3H will support up to 32Gb of DRAM at speeds of 2400MHz (OC) in dual channel architecture. Below the four DIMM slots we can find a single 4pin system fan header, the internal header for SuperSpeed USB 3.0, and the 24pin motherboard power. 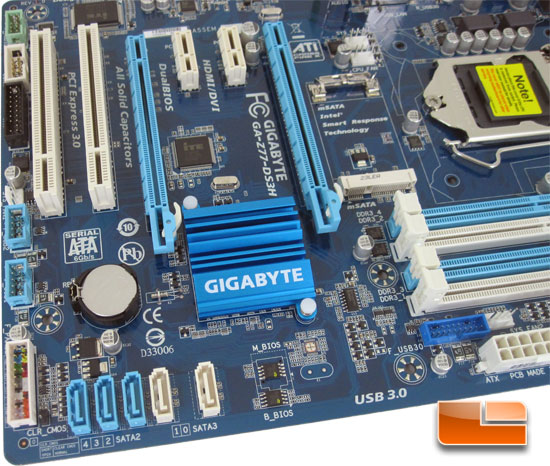 Once again we could run into a clearance issue with the SATA cables depending on the length of a second graphics card. One of the SATA III 6Gbps ports will clear regardless, while the remaining four SATA ports are all blocked by a long dual slot card. Next to the SATA ports we can find the clear CMOS jumper, front panel header, a pair of USB 2.0 internal headers, followed by a second 4pin system fan header. 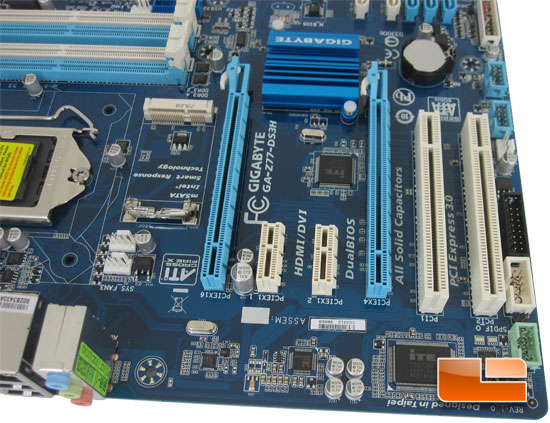 Spinning the GIGABYTE Z77-DS3H around we can pick up where we left off along the edge of the board. The black header is the TPM (Trusted Platform Module), followed by a COM port, SPDIF out, and the front panel audio header. Along the leading edge of the Z77-DS3H we can find the ITE IT8728F super I/O controller, Realtek ALC887 high definition 7.1 channel audio codec, and an Atheros AR8151-B Gigabit LAN controller. The GIGABYTE Z77-DS3H features a pair of PCIe x16 slots, the primary slot runs PCIe Gen 3 at x16 while the secondary PCIe x16 slot runs PCIe Gen2 at x4. We also have a pair of PCIe Gen 2 x1 slots and a pair of PCI slots. To the left of the primary PCIe x16 slot is mSATA port. This can be used for a mSATA SSD for either Intel SRT, or as a primary drive if you have a large enough one. In front of the mSATA there is a 4pin power fan header and a 4pin system fan header. 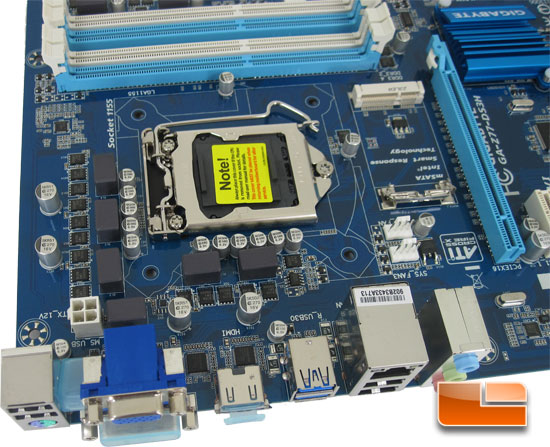 The area behind the I/O panel has a couple of items that don’t typically come across my bench. There are no heatsinks on the PWM’s, and there is only a 4pin CPU power plug. It will be interesting to see how far we can push our Intel Core i7 3770k under these conditions.

The I/O panel is pretty comparable to the other two boards. Though unlike the ASRock Z77 Pro3 we have both DVI and a 15 pin d-sub for the integrated video. The audio jacks are a little on the light side though. There is only three 3.5mm audio jacks. Both of our other boards have six 3.5mm jacks. Aside from that we have the same four USB 2.0, two SuperSpeed USB 3.0, a single PS/2 port, HDMI, and Gigabit Ethernet.