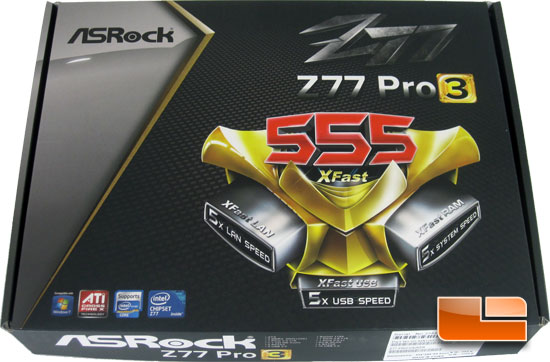 Taking a look at our first sub-$100 Intel Z77 motherboard, we have the ASRock Z77 Pro3 at our disposal. The front of the retail packaging prominently points out the ASRock 555 XFast technology. The 555 XFast technology includes the XFast LAN, XFast USB, and the XFast Ram. Along the bottom of the retail packaging we can see that is supports Windows 7, AMD/ATI CrossFire X, support for Intel Core processors, and the Intel Chipset Z77 inside logo. 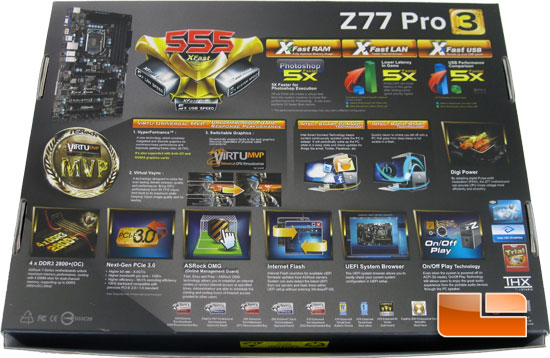 Flipping the box for the ASRock Z77 Pro3 over, ASRock breaks down the technology that goes into the Z77 Pro3. 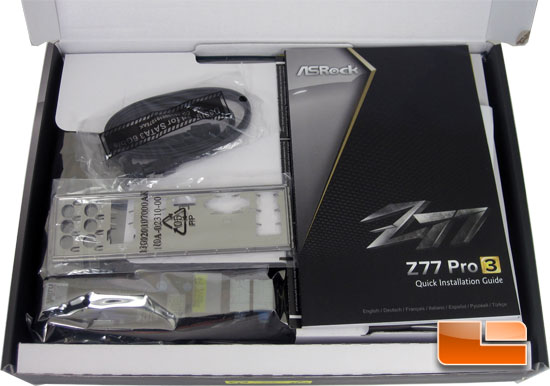 Once we open up the packaging, the bundle for the ASRock Z77 Pro3 is the first to present itself. The bundle is separated from the motherboard by a layer of cardboard to prevent damages during shipping. 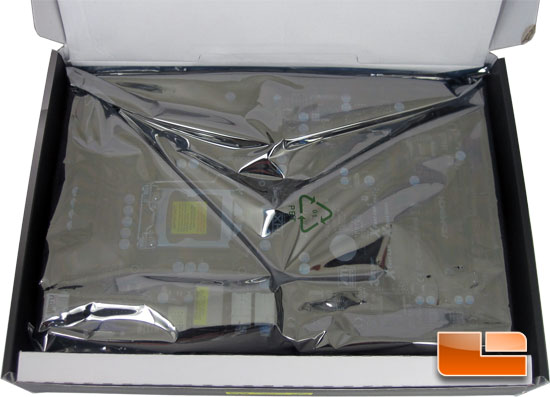 Removing the bundle and the protective layer of cardboard we can catch our first glimpse of the ASRock Z77 Pro3. Though it is obscured by the anti-static bag that protects the Z77 Pro3 from ESD. 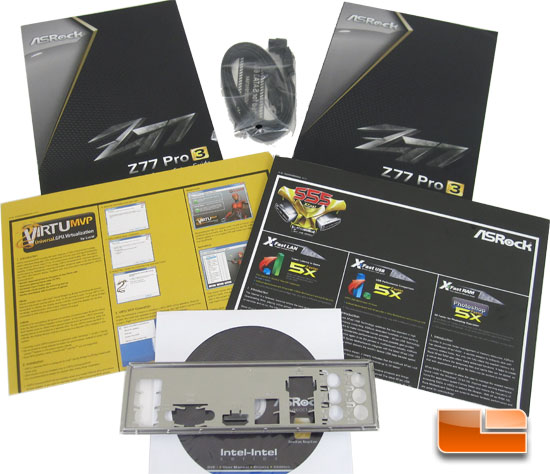 Since this is a ‘budget’ minded board, there isn’t much in the way of a bundle. ASRock only included a pair of SATA cables, manuals, literature on the VirtuMVP and XFast technologies, I/O shield, and a driver disc. 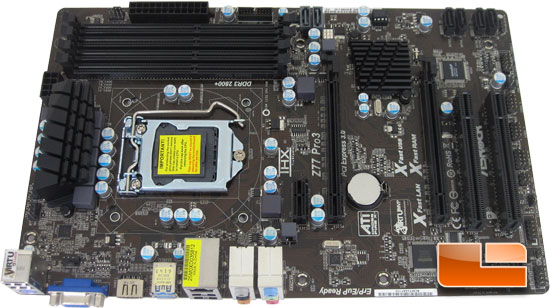 The ASRock Z77 Pro3 is a very clean looking board with an overall decent layout. The PCB itself measures 12in x 7.6in, since ASRock didn’t pack a whole lot of third party controllers on the Z77 Pro3 they didn’t need nearly as much real estate on the PCB. 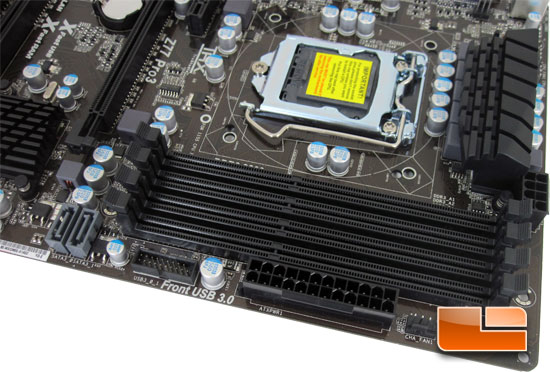 Taking a closer look at the ASRock Z77 Pro3, we can see that it has the typical four DIMM slots. The ASRock Z77 Pro3 will support up to 32Gb of DDR3 memory at speeds up to 2800MHz(OC)! Along the edge of the board we can find the lone 4pin chassis fan header. We also have the typical 24pin motherboard header, as well as the onboard header for the internal SuperSpeed USB 3.0 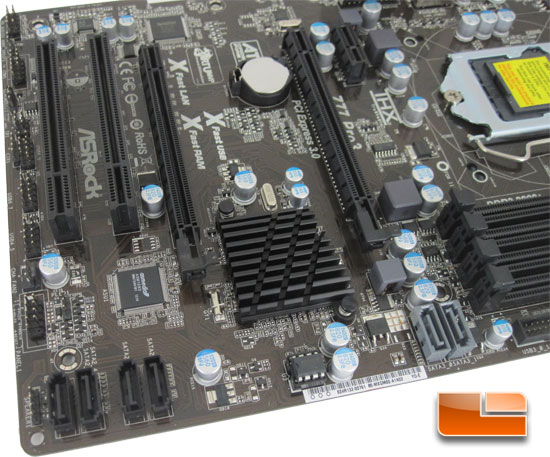 Moving around to the next corner of the board, ASRock did something that I had hoped that we were done seeing. The SATA ports all come out perpendicular to the PCB. This can cause interference with longer graphics cards. The only two that I can see being an issue though are the center pair, SATA2_2 and SATA2_3. The pair of SATA III 6Gbps ports are on the back side of the first PCIe x16 slot so there shouldn’t be any issues there, and unless you are running a second graphics card that requires three expansion slots of space the pair of SATA II on the left should be far enough away that there is enough clearance. Along the left edge of the ASRock Z77 Pro3, we have the speaker header, front panel header, a 3pin chassis fan header, three internal USB 2 headers, a consumer infrared module header, a separate infrared module header 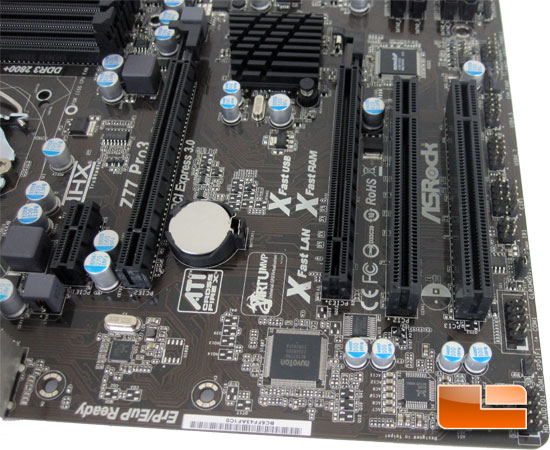 Picking up where we left off above, we have the clear CMOS jumper, COM port header, HDMI SPDIF out, and the front panel audio header. Rounding the corner we have the Realtek ALC892 high definition audio codec, Nuvoton NCT67760 Super I/O controller, and a Realtek RTL8111E Gigabit Ethernet controller. The ASRock Z77 Pro3 features a pair of PCIe x16 slots. The primary PCIe x16 slot is PCIe Gen3 capable and always runs at x16, the secondary PCIe x16 slot is only PCIe Gen 2 and runs at x4. We also have a pair of PCI slots, and a single PCIe x1 Gen 2 slot. 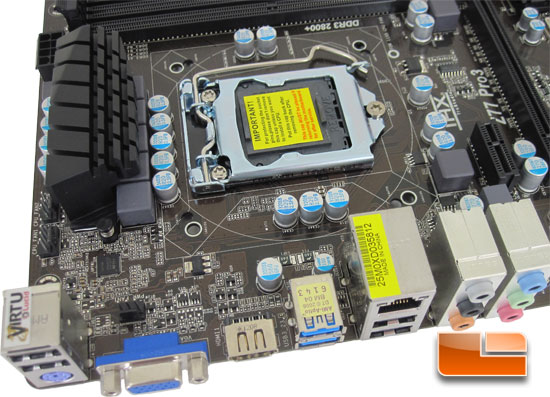 Taking a look at the area behind the I/O panel, we can see a 4pin power fan header, a pair of CPU fan headers (1x 4pin, 1x 3pin). The heatsink on the left side of the above photo is keeping the CPU power delivery PWM’s cool. The ASRock Z77 Pro3 is using a 4+1 power phase design for the CPU.

The I/O panel for the ASRock Z77 Pro3 lacks one feature that I would have liked to see today. Instead of using a DVI port for the integrated graphics, ASRock used a 15pin d-sub VGA connector. They did however, include an HDMI port that can be used to deliver the video signal. There is a total of four USB 2.0 ports, two SuperSpeed USB 3.0 ports, a single PS/2 port, and six 3.5mm audio jacks.