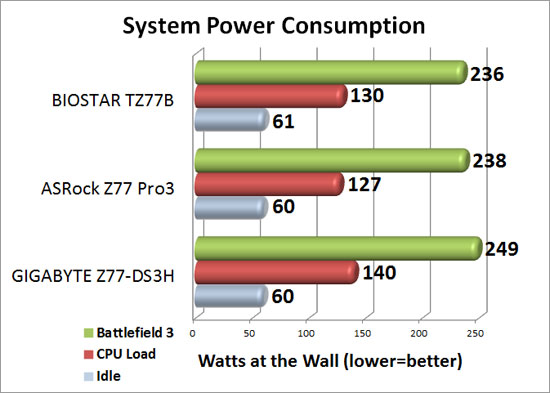 Benchmark Results: While the systems were at idle, all three Intel Z77 motherboards were nearly identical. Once we loaded up our Intel Core i7 3770K with the AIDA64 system stability test we saw some minor differences. The ASRock Z77 Pro3 was pulling the least amount of power with only 127 Watts at the wall, the BIOSTAR was pulling 3 Watts more at 130 Watts. The GIGABYTE Z77-DS3H was pulling 13 Watts more than our leader with 140 Watts. While watching our P3 Kill-a-Watt during our runs in Battlefield 3 the BIOSTAR TZ77B had the lowest power consumption with 236 Watts, followed by the ASRock Z77 Pro3 with 238 Watts, and the GIGABYTE Z77-DS3H pulled the most with 249 Watts at the wall.