WD_BLACK SN850 Take Performance To The Next Level

The WD_BLACK SN750 NVMe SSD entered the market in January 2019 as one of the fastest PCIe Gen3 drives on the market and was targeted to gamers and enthusiasts. After being on the the market for nearly two years it is finally time to move forward, meet the WD_BLACK SN850. Western Digital believes that now is the perfect time to introduce their very first PCIe Gen4 drive for the consumer market.

A brand new WD G2 controller powers the WD_BLACK SN850 SSD series that is available in 500GB, 1TB and 2TB capacities here at launch. WD paired the G2 controller with 96L 3D TLC NAND Flash memory (BiCS4) and the combination seems to be pretty stellar. The SN850 series is capable of reaching up to 7,100 MB/s read and 5,300 MB/s write on some capacities. They specifications also show the random performance is capable of reaching 1 million IOPS read and 720,000 IOPS write. WD brags about how long load times will be obsolete with next-gen PCIe Gen4 technology and who doesn’t want that to be the case? 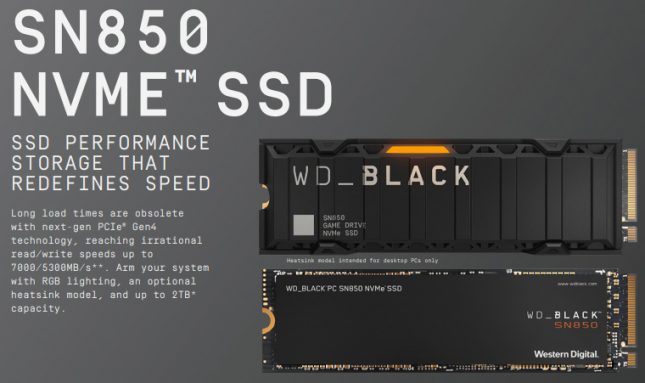 For those that like to know what has been changed under the hood of the new G2 controller the PR team over at WD gave us a bit of information to share with you. During the move from a PCIe Gen3 to Gen4 controller they focused on improving the low QD (queue depth) performance, incorporated a dynamic SLC caching algorithm, and optimized the design to work perfectly in conjunction with their in-house built NAND and firmware.

These are the highlights of the new WD_Black G2 controller: 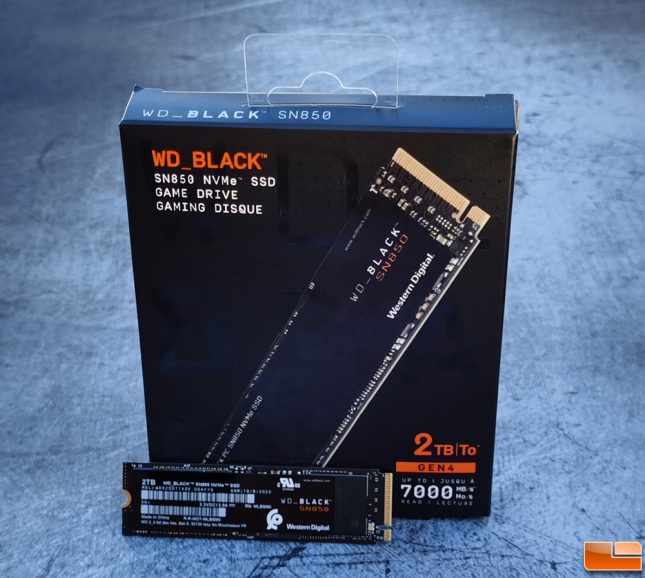 Western Digital sent the WD_BLACK SN850 2TB NVMe SSD for us to test on our AMD Ryzen X570 platform. The part number on the drive that we received was WDS200T1X0E and it just came to market in November 2020.

All three capacities of the WD_BLACK SN850 NVMe SSD are single-sided M.2 2280 NVMe SSDs. Right now the only models that are available come without a heatsink, but WD will be introducing an optional heatsink model that has RGB lighting in the future at a slight price premium. The customizable RGB lighting is programmable on Windows systems with the WD_BLACK dashboard. WD says the heatsink model minimizes thermal throttling, so it will be interesting to see how bad this drive overheats and throttles sans heatsink.

The back of the SN850 2TB NVMe SSD is completely barren as you won’t fit any components on the back let alone any product labels. Nothing else was included in our retail packaging, so all you get is the SN850 drive in some recyclable packaging. 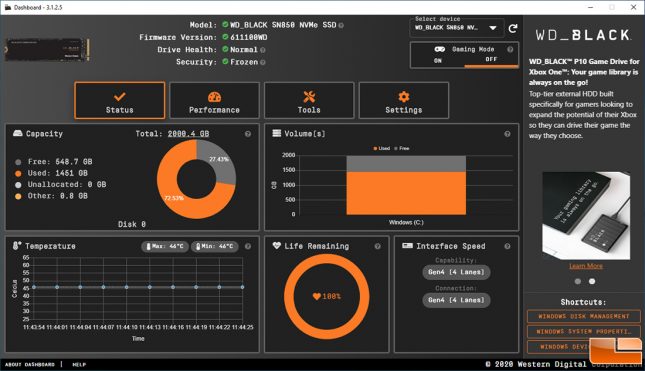 To get the most from the WD_BLACK SN850 NVMe SSD you’ll need to download the WD_BLACK dashboard. This free utility will give you everything you need to manage your drive as well as advanced settings like gaming mode. You also have access to a build of Acronis True Image 2020 WD Edition, which is a popular disk migration utility with the purchase of this drive. These two programs will ensure your drive is running smoothly with the latest firmware version and will ensure data migrations are a breeze!

Let’s take a look at the test system and then show you how the SN850 NVMe SSD did on a bunch of different performance tests!