Battlefield 1 (also known as BF1) is the fifteenth installment in the Battlefield Series developed by DICE and published by EA. The game is set during World War I. It was released world wide on October 21, 2016. The single player campaign of Battlefield 1 takes place across six different “War Stories” which revolve around different people in different aspects of the Great War in campaigns such as the Italian Alps and the deserts of Arabia. We benchmark in Through Mud and Blood, which is the second mission in singleplayer campaign. Taking place late in the war, the player assumes the role of Danny Edwards, a British recruit joining the crew of a Mark V Landship named Black Bess as their new tank driver. New to the war and inexperienced in driving the unreliable vehicle, Edwards is given a trial by fire with his first mission: punch through the German line at Cambrai with a broken tank and a crew that has no trust in him. 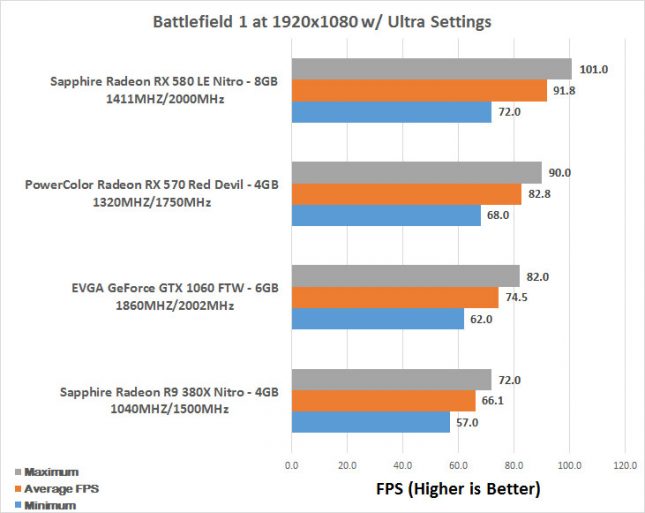 1080P Benchmark Results: At the popular 1080p gaming resolution the we were happy to see that all the graphics cards tested were able to average at least 60 FPS as the Sapphire NITRO Radeon R9 380X is pushing 2 years old. The new PowerColor Red Devil Radeon RX 570 4GB graphics card averaged 82.8 FPS and was 11 FPS behind the Radeon RX 580 card we tested it against. 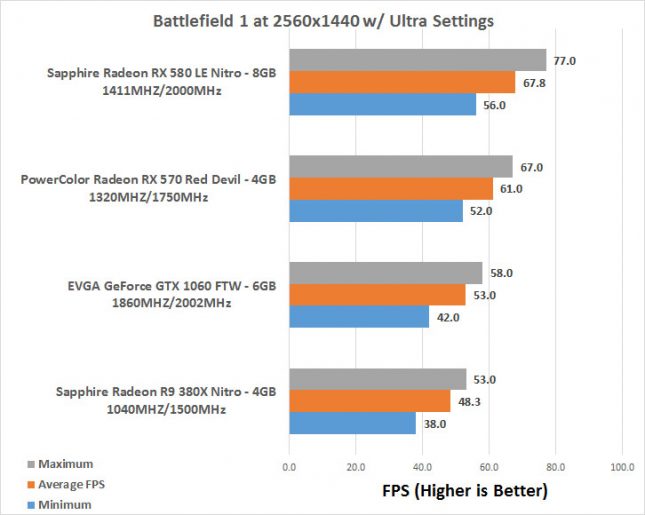 1440P Benchmark Results: When we went up to a 1440P screen resolution on our display we found the PowerColor Red Devil Radeon RX 570 4GB graphics card was 26% faster than the Radeon R9 380X and 15% faster than the EVGA GeForce GTX 1060 FTW.