NVIDIA SLI on the GeForce RTX 2080 Ti looks pretty good on the game titles and applications that support it. Some game titled like Rainbow Six Siege only gave us a 10% performance boost at 4K settings, but others like Strange Brigade gave us 93% scaling. So, the scaling you get from SLI is very dependent on the game title being used an of course what processor you are using. Shadow of the Tomb Raider showed that we were only 32% GPU bound with the RTX 2080 Ti SLI setup and an Intel Core i7-8086K processor at 4K with the highest possible graphics settings. You’ll want to make sure that you are running a really good processor if you are wanting an RTX-20 series SLI gaming PC.

The big issue with SLI is that many developers don’t optimize for it as such a small percentage of gamers actually run SLI. That has always been the biggest issue with multi-GPU configurations and that doesn’t appear to be changing anytime soon. One would hope that game titles like PUBG where over 50 million copies have been sold would support NVIDIA SLI, but sadly there is not. With over $1 billion being made off PUBG we whole heartily expect an SLI profile be available for gamers as the money is most certainly there to make it happen. There is a campaign to ‘fix PUBG‘ right now, but helping get an SLI profile is not on the list of public improvements. Yes, we are ranting. We are gamers just like you and it really is infuriating when something like that slips through the cracks. Someone has to call it out! 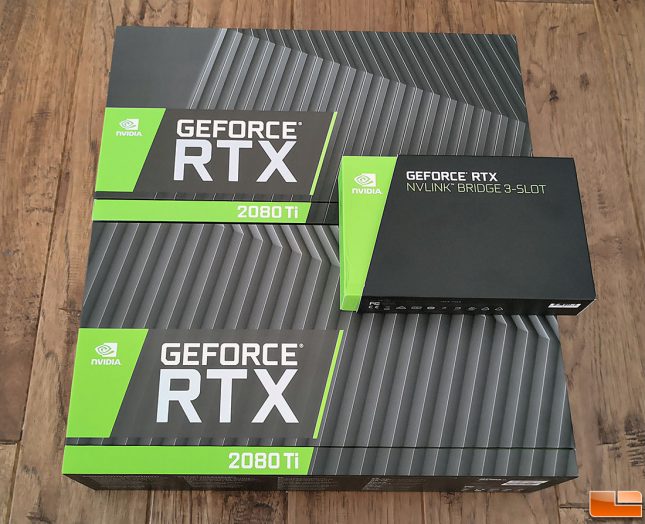 That said, gaming on a PC with two NVIDIA GeForce RTX 2080 Ti graphics cards in SLI with the NVLink adapter was impressive. Games looked beautiful on the Acer Predator X27 4K 144Hz G-Sync gaming display and we finally able to play some games at 4K 120Hz with HDR enabled. When you spend this amount of money you want to have an amazing gaming experience and this allows you to do just that. You’ll need to turn down the image quality settings a bit though as 4K 120 Hz gaming is tough even for an RTX 2080 Ti SLI setup. AMD can’t compete at 4K 120Hz with what they currently have to offer, so NVIDIA has the high-end gaming market all to themselves.

Legit Bottom Line: Running a pair of NVIDIA GeForce RTX 2080 Ti graphics cards in SLI won’t be financially possible for many, but will be enticing for those that can afford it.