Enabling SLI on the RTX 2080 Ti with an NVLink Bridge

A number of sites already have GeForce RTX 2080 SLI coverage up, but we just recently got our hands on everything needed for an SLI setup. That means we can give you our own performance testing and thoughts! We’ll be using two NVIDIA GeForce RTX 2080 Ti FE graphics cards for our SLI setup and we’ll be using the NVIDIA GeForce RTX NVLink 3-slot bridge connector. This setup is extremely expensive and won’t be for everyone. The NVIDIA GeForce RTX 2080 Ti video cards run $1,200 each and the NVLink Bridge connector is available for $79. That means you are looking at just shy of $2500 for this setup. We’ll be using an Acer Predator X27 27″ IPS LED 4K 144Hz G-Sync HDR display to benchmark these cards as you need an amazing display to accommodate graphics cards like these. The Acer Predator X27 is $2,000 shipped, so this article will be a look at performance of a dream build for many of our readers. Not everyone can spend over $5,000 for a Gaming PC and we understand that. This is for those that are curious how well NVIDIA’s new flagship graphics card can do in SLI. Are we at a point where the goal of a 4K 60 FPS gaming PC is a thing of the past? Are we ready for 4K 120 FPS and maybe even 8K gaming displays? 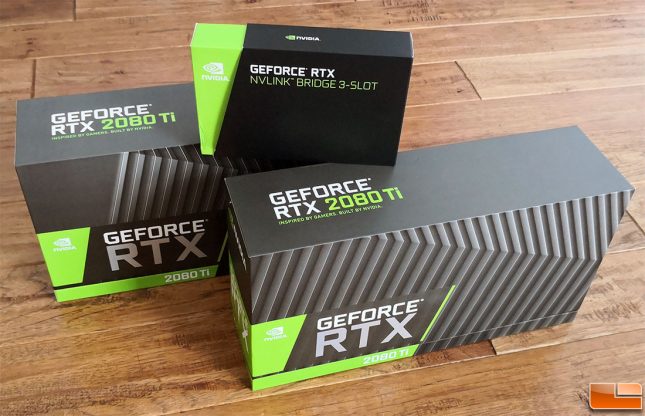 We haven’t build a multi-GPU system in some time, but we really wanted to check out NVIDIA SLI on the RTX series. This is the first series to use NVIDIA’s new NVLink High-Speed GPU interconnect. This new interconnect allows for up to 100 GB/s and is said to offer 50x the transfer bandwidth of previous technologies. NVIDIA just introduced SLI-HB bridges with Pascal GPUs, but this new interface has even more bandwidth to support 4K-120Hz, 5K-60Hz and 8K displays according to NVIDIA. The NVIDIA NVLink bridge is available in 3-slot (60.96mm) and 4-slot (81.26mm) configurations and both are priced at $79. Our GPU Test platform uses an Intel Core i7-8086K processor running on a Gigabyte Z370 AORUS Gaming 7-OP, so we went with the 3-way bridge. 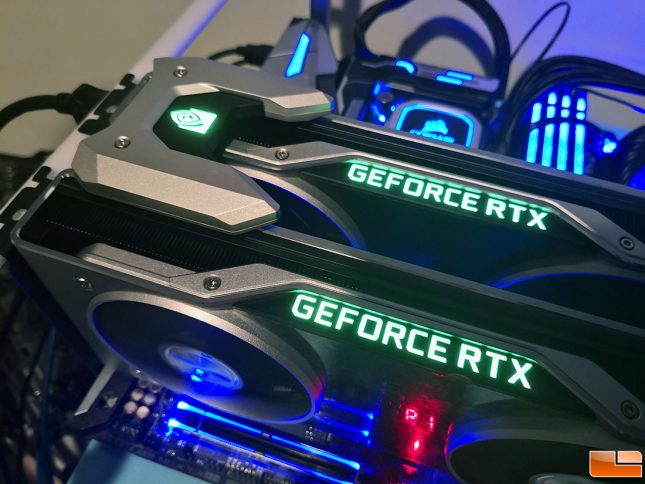 We already had the NVIDIA GeForce RTX 2080 Ti FE graphics card installed, so adding the second card was as simple as it gets. The drivers automatically installed and we went into the NVIDIA Control Panel and enabled SLI to maximize our systems 3D performance. The Acer Predator X27 display went blank for a minute or so, but after that everything was working great. Not every game title supports SLI, so we removed PlayerUnknown’s Battlegrounds (PUBG), Monster Hunter: World and the Superposition Benchmark from our test suite since they don’t have SLI profiles. We felt bad taking tests away, so we added the OpenCL benchmark called Luxmark and we’ll be doing some of the GPGPU benchmarks in SiSoftware Sandar 2018. 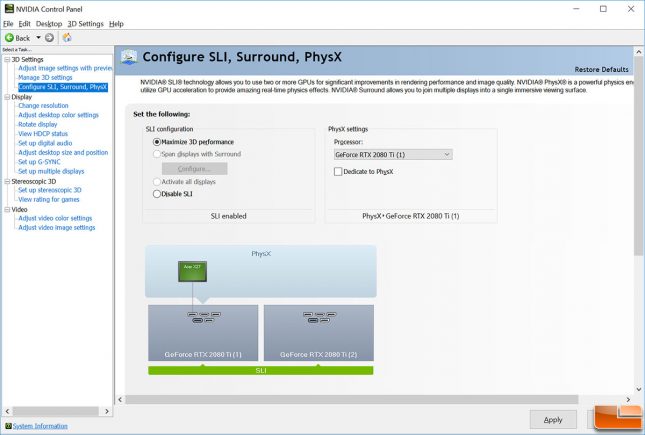