This game looks great and we tested with the highest settings possible.  This means we used ‘ultra’ settings and really punished the cards being tested. We ran FRAPS for two minutes on the single player map called ‘Rock and a Hard Place’ for benchmarking. 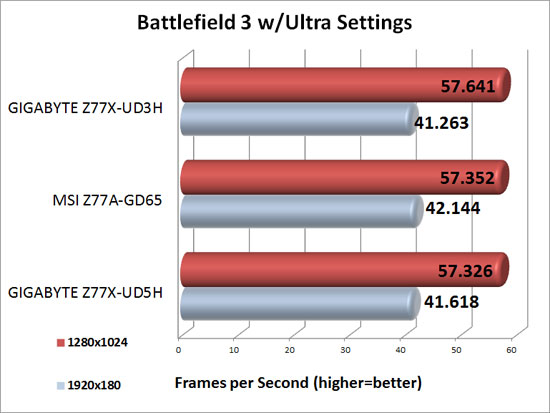 Benchmark Results: It isn’t surprising that there is virtually no performance difference between the GIGABYTE Z77X-UD5H and Z77X-UD3H motherboards and the MSI Z77A-GD65. Not long ago we ran Battlefield 3 on multiple Intel processors ranging from the Pentium G620 to the Intel Core i7 2600K and saw virtually no performance difference. The small differences that we see above are likely a combination of changes in AI and an error between the keyboard and chair.
Questions or Comments? View this thread in our forums!
Jump To:
« Prev 1 2 3 4 5 6 7 8 9 10 11 12 13 14 15 16 17  Next »