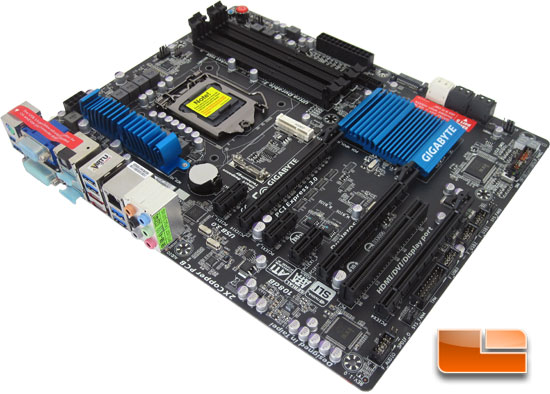 The Intel Z77 Express chipset is the culmination of years of chipset innovations and the is the ideal companion for the upcoming Ivy Bridge processors that make up the new 3rd generation Intel Core processor family. Let’s dive into how this chipset came about and the differences of the three key chipsets that will work with Ivy Bridge processors.

When Intel released LGA 1155 (known as socket H2) they made mainstream users abandon the LGA 1156 (known as socket H) platform and switch over to the new socket. The first flagship chipset for this platform was the P67 Express and it get off to a rocky start. You couldn’t run the processors on-die GPU on a P-series chipset board! You had to run an Intel H-series chipset, but on those you couldn’t overclock the CPU or the memory, although you could overclock the GPU. One of the best features of the Sandy Bridge processor series was the processors ability to run Quick Sync video, but anyone that bought P-series motherboard couldn’t use this feature. This left enthusiasts and overclockers at a loss for words as there wasn’t a chipset that suited their needs.

Luckily, Intel quickly came out with the Z68 Express chipset that solved many of first generation chipset issues. No major architecture changes were made, so when it came to USB, SATA or PCIe lanes, there was nothing different. The changes that Intel made were that this chipset could now support video output from a Sandy Bridge (and now Ivy Bridge) processor, the ability to overclock the integrated graphics processor and Intel Rapid Storage Technology (RST) for those wanting SSD caching. The Intel Z68 Express chipset fixed many of the issues consumers had with P67 and has proven itself to be a solid chipset for nearly a year now.

Since there isn’t a socket change happening with the introduction of the Ivy Bridge processors, Intel wanted to basically polish up their chipset and finally include native USB 3.0 support. Intel will be releasing a whole slew of chipsets in the coming weeks, so get ready to hear about Z77, Z75, H77, Q77, Q75 and B75 powered motherboards in the weeks and months to come. All Intel 7-series chipsets will support four SuperSpeed USB 3.0 capable ports! This is something that has been a long time coming and it also why the main reasons why the maximum TDP of the Z77 chipset is 10% higher than the Z68. All Intel 7-series chipsets are also guaranteed to support PCI Express 3.0, but as you know this was technically possible on all 6-series motherboards and most were sold supporting that feature.

When it comes to pricing of the Gigabyte Z77 boards they have suggested retail prices that range from $78 to $303, which is quite the spread.

Gigabyte sent over the GA-Z77X-UD5H-WB WiFi and the GA-Z77X-UD3H for review, which happens to be a pair of their upper tier boards. The boards cost $224 and $184, respectively. Since they both use the same Intel Z77 Express chipset, the core features are identical and both were found to be solid performing boards. Gigabyte differentiates their 10 Intel Z77 based boards with the configuration of components and the boards layout. This means you’ll see different power phase designs and additional SATA, USB, WiFi and overclocking features, among others, to separate the boards and allow for different prices.

The Gigabyte GA-Z77X-UD5H-WB WiFi is unique in the sense that it includes a PCIe expansion card that offers Bluetooth 4.0 and IEEE 802.11 a/b/g/n Wi-Fi connectivity. This board is obviously aimed at those with mobile devices like the Applie iPhone 4S that already support Bluetooth 4.0 for quick wireless data transfers. This board also features a 12 phase power VRM design that  is cooled by a passive cooler that is interlinked with a heatpipe. We also like that the Gigabyte GA-Z77X-UD5H-WB WiFi has two LAN ports and that one of them uses an Intel GbE LAN chip. We’ve had good luck with Intel controllers and not all boards use them. For example the lower cost GA-Z77X-UD3H motherboard uses an Atheros GbE LAN chip. It also lacks the Marvell 88SE9172 SATA III 6Gbps
controller that can be found on the GA-Z77X-UD5H-WB WiFi.

Ultimately the performance difference between the GIGABYTE Z77X-UD5H and the Z77X-UD3H was negligible. This isn’t unexpected though, the main differences between these two motherboards is the feature set. The Z77X-UD3H will carries a $40 lower street price thanks to a smaller list of features. While the default performance of the boards was pretty much identical, we did see a small difference in overclocking. In this battle the Gigabyte GA-Z77X-UD5H-WB WiFi was the winner with a 100MHz higher max overclock.

The main highlight for this new chipset is native SuperSpeed USB 3.0 support in the chipset. We have heard rumors that the performance of the Intel SuperSpeed USB 3.0, wasn’t quite up to par with some of the third party controllers. Looking at the results, the rumors appear to be false.

Looking at the results from our SuperSpeed USB 3.0 testing with CrystalDiskMark, it’s clear that the three Intel Z77 Express chipset powered motherboards that we have tested have worked great. The Sequential Read and write speeds were significantly faster than the ASMedia ASM1042 SuperSpeed USB 3.0 Controller employed by the ASUS P8Z68-V Pro. Granted, the ASMedia ASM1042 USB 3.0 controller isn’t the only controller out there, but it has been one of the fastest that we have tested. In our recent MSI Big Bang XPower 2 article we have six different motherboards using four different controllers, and none of them came close to the performance that we saw from the Intel Z77 SuperSpeed USB 3.0 controller.

Each of the GIGABYTE motherboards that we looked at today carry a three year warranty should you happen to have a failure.

Legit Bottom Line: GIGABYTE is going to have a very strong Intel Z77 product stack. If all of their motherboards perform like the Z77X-UD5H WiFi and the Z77X-UD3H did, they will continue to be a force to be reckoned with!