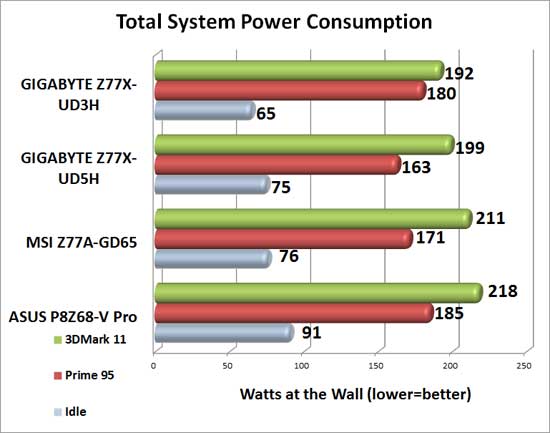 Benchmark Results: The power consumptions of the GIGABYTE Z77X-UD5H WiFi was significantly lower than that of the Z77X-UD3H during the time in Prime95. What we noticed was the Z77X-UD5 runs at 3.5GHz under a full load and the Z77X-UD3H runs at 3.8GHz under a full load. All of the Intel Z77 motherboards had lower power consumption across the board than the ASUS Z68 motherboard though. At Idle, the GIGABYTE Z77X-UD3H was sipping power at only 65 Watts and under the synthetic gaming load it was pulling 192 Watts. The GIGABYTE Z77X-UD5H pulled slightly more at idle with 75 Watts, and in 3DMark 11 it pulled a peak of 199 Watts.