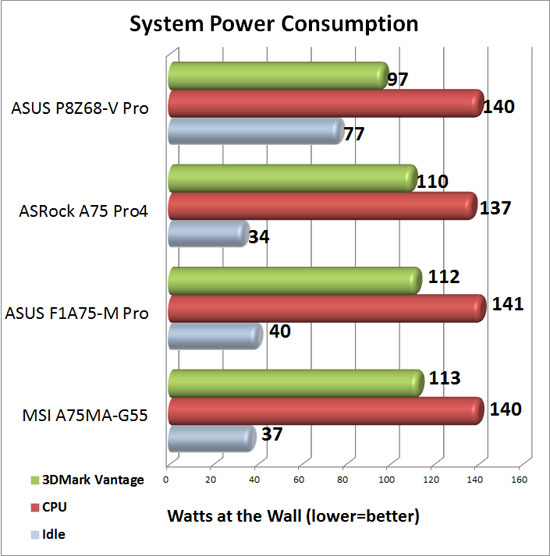 Benchmark Results: The ASRock A75 Pro4 is the first full ATX form factor AMD socket FM1 APU board that we have tested. Due to that fact alone I was expecting the power draw to be slightly higher than the previous APU motherboards. I was honestly surprised to see that it was actually lower in all tests. At idle the ASRock A75 Pro4 pulled only 34 Watts while the MSI A75MA-G55 pulled 37 Watts. Firing up Prime95 Large FFT’s the ASRock A75 Pro4 pulled 137 Watts. The only time that one of our systems managed to pull less power than the ASRock A75 Pro4 was when running 3DMark Vantage. In 3DMark Vantage the ASUS P8Z68-V Pro “Sandy Bridge” managed to pull only 97 Watts, though the performance of the Intel HD 3000 graphics is nowhere near the same caliber as the AMD Radeon HD 6550D that the AMD A8-3850 APU uses.