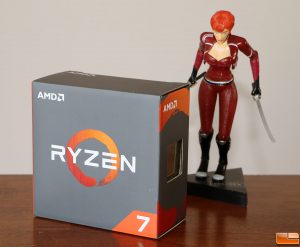 The AMD Ryzen 7 1700 processor benchmark results with this chip overclocked up to 4.0 GHz are impressive. Running all 8-cores on a Ryzen processor at 4 GHz is fun and you can see how far AMD has come with Ryzen since the old FX series processors. Sure, Ryzen has some shortcomings with regards to 1080P gaming, but AMD and its partners self-admittedly still need do optimizations on both the new platform and for the applications and game titles to really get the most out of this new platform. The early gaming benchmark numbers certainly show the area for improvement on Ryzen and it will be interesting to see what AMD can to to improve those scores. AMD has already said that they will get better and it sounds like they want many of those improvements to happen before the Ryzen 5 processor series launch in Q2, 2017. That gives AMD at least a month to figure things out and from our sources inside AMD they feel like they can get those gaming scores up a little bit across the board and even more so on a per application basis with AMD Ryzen optimized patches.

If AMD can get those 1080P game scores on par with Intel – and that’s a big if – what would the next major area of concern be? The small amount of overclocking headroom that AMD left on Ryzen is a bummer, but they wanted to get all the clock frequency they could to be competitive with Intel. AMD will also likely make manufacturing advancements in the months to come as this is their first ever processor to use the 14nm FinFET process. 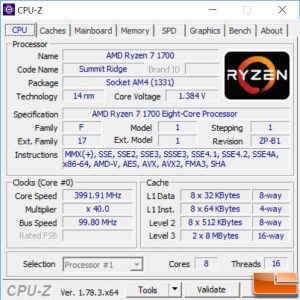 If you are comfortable with overclocking we think that the AMD Ryzen 7 1700 is the most appealing Ryzen 7 processor of the three.

If you are a content creator the performance numbers for a $329 processor are solid and it shows that Ryzen 7 1700 is a price versus performance winner. If you are a gamer and are upset with the 1080P benchmark results you might want to hold off for a month or so and see what AMD can do. We are thinking the the AMD Ryzen 5 series will launch sometime in April and feel that AMD needs to get most of these performance issues figured out before that launch. You’ll then be able to see the updated performance numbers and be able to compare Ryzen 7 to Ryzen 5 at that time. It will also be interesting to see if any game patches have come out by then or if a big CPU microcode update was rolled out in a new UEFI by the board makers that can bring further Ryzen performance optimizations for 1080P gaming.

An AMD Ryzen 1700 processor with a Wraith cooler runs $329 and you are looking at around $130 for a nicely loaded AMD B350 motherboard, so for around $459 you can have a nice core platform for your new 8-core 16-thread Ryzen system at less than half the price of just a bare Intel Core i7-6900K processor. This might be the sleeper processor that enthusiasts have been waiting for. Could this be the equivalent of the Athlon XP AGOIA stepping processor that Generation X grew up, but for the next generation of PC users?

Legit Bottom Line: The performance numbers for the Ryzen 7 1700 overclocked to 4GHz are impressive, but they might not be representative of the processors full capabilities once AMD gets some more optimizations rolled out. This is the starting point for Ryzen!