Last week, NVIDIA released the GeForce GTX 1080 Ti Founders Edition graphics card. This is the fastest desktop consumer graphics card in the world and we were torn on how we wanted to test it. We are in the middle of updating out GPU test bench and are fighting a few hardware gremlins and we thought we’d try something new and a little different for a change. AMD just recently launched it’s Ryzen processor series and that is a huge architectural change for AMD. It’s been many years since we’ve run graphics cards benchmarks on an AMD platform since Intel has been the platform of choice for gaming performance. Has that changed? 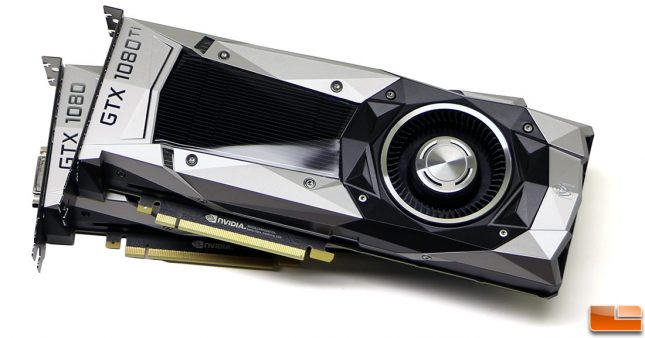 So, rather than comparing the Intel GeForce GTX 1080 Ti Founders Edition graphics card to dozens of other video cards we are going to be comparing it to just the NVIDIA GeForce GTX 1080 Founders Edition, but on two different platforms. One will be powered by a stock Intel Core i7-7700K processor ($329.99) and the other will be powered by the AMD Ryzen 7 1700 ($329.99). Both systems have Corsair Hydro series CPU water coolers and are running the same exact Corsair Vengeance LPX 16GB of DDR4 memory kit at 2933 MHz with CL14 timings. We tried to make the platforms as identical as possible as we wanted to see how the GPU would scale at 1080P, 1440P and 4K resolutions when powered by latest Intel Core i7 Kaby Lake and AMD Ryzen 7 processors. We also gave the AMD Ryzen 7 1700 a head start by overclocking it from 3.0GHz (3.7GHz Turbo) stock clock speeds all the way up to 4GHz on all 8-cores. The Intel Core i7-7700K ‘Kaby Lake’ processor was left at stock settings, which are 4.2GHz base and 4.5GHz boost.

We’ve all heard that AMD Ryzen 7 series processors don’t perform that hot at 1080P resolutions, so we’ll be paying close attention to how the GPU performance scales when you move from the GeForce GTX 1080 to the GeForce GTX 1080 Ti. We’ve been slowly coming to the point that the GPU is going to be bottle-necked a little by the processor on both platforms. This greatly depends on the game title you are looking at, so we wanted to take a quick look at a few game titles.

Depending on how much traffic this article gets we might expanding testing and look at more processors in the future as we do see CPU bottlenecks becoming an increasing concern for many. Keep in mind that CPU bottlenecks are more prevalent at lower resolutions and graphics settings. Once you increase the resolution or image quality settings you’ll likely become more GPU bound and the CPU bottleneck will be lessened.

That said, let’s look at the test systems and then jump into the benchmarks.