It’s certainly an impressive system when you have a kit of the ADATA XPG 3100MHz memory installed into it, unfortunately I wasn’t impressed with the performance numbers I was seeing from the benchmarks I ran. Every benchmark that I ran saw performance gains at 3100MHz, but upon closer examination of the results I think that was more a result of the increased processor speed than as a result of the higher frequency memory kit. The only way to hit 3100MHz memory on the Intel Z97 platform is to increase the Bclk. In the case of the GIGABYTE Z97X-UD5H motherboard that I’m using for the test bench it increased to 129.11MHz. The system does drop the CPU multiplier to x32, but our Intel Core i7 4770K was still running at 4.13GHz the entire time. That’s 231MHz over the Intel Turbo specification of 3.9GHz and 631MHz over the base speed of 3.5GHz. Right off of the bat we are going to see some gains from the increased processor speed. 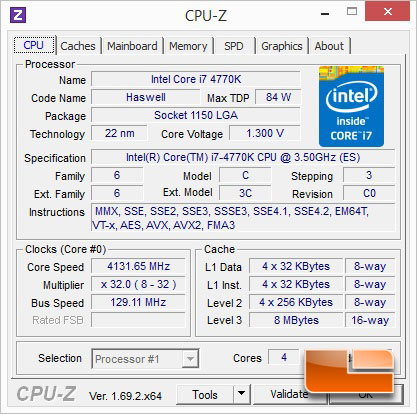 In the CPU specific benchmarks like the X264 HD Video encoding benchmark the first pass was ~5 frames per second faster than the other settings that I tested. Though when I dropped the Intel Core i7-4770K back to the Intel specifications and increased the ADATA 3100MHz memory to the maximum memory multiplier of 29.33, the performance in the CPU benchmarks was spot on with the system while it was running the Corsair 2133MHz memory modules.

The ADATA XPG V3 memory kit is already pushing the envelope at 3100MHz, so I wasn’t sure how much further I would be able to push the ADATA XPG V3 3100MHz memory kit through overclocking. I’ll be the first to admit that I’m not a world class overclocker when it comes to pushing memory frequencies, but I’d like to think I’m proficient enough to get the job done. Today I was able to squeeze out another 100Mhz from the ADATA XPG V3 3100MHz memory kit! The system did take a bit of performance hit at 3200MHz, but with some time and fine tuning that could be turned around I’m sure.

Legit Bottom Line: The ADATA XPG V3 Memory kit is a slick looking memory kit, and having the ability to change the color of the heat spreader is a plus. Without a doubt it’s an impressive feat to have a stable retail kit to run at 3100MHz with a little bit of headroom for overclocking, I’m just not impressed by the performance gains from the increase in memory frequency.