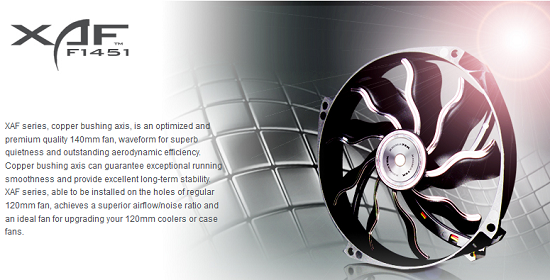 Xigmatek let us take a look at the new XAF Series from them today, and I came away with some mixed results. These fans start off with a with a 1 year warranty at $23.99-$24.99 + shipping & handling; reasonable for “premium” 140mm fans. Though I do wish the warranty was longer. Let’s divulge for a moment, as these fans are not “premium” parts. Above average is an astute monicker for them, but definitely not “premium.”

To start with, Xigmatek says the XAF series comes with a “copper brushing axis” which is a factor of it’s premium quality? I hate to disagree with them here, but that’s not a factor of premium quality as many middle of the road, to high end fans, come with copper axis. Copper is used for it’s “better” magnetic properties compared to other, cheaper, metals. They claim that copper axis gives this fan a longer lifetime but that isn’t true either; the metal is used for it’s reactionary properties and aluminum lasts no longer nor no less in this instance, than copper does.

They make a double claim that this fan can have a smoother running bearing because of the copper axis but this is also, has no basis in reality. Either a well balanced impeller, and better craftsmanship of the assembly process, or a more tightly controlled bearing will give you smoother operations and thus lower noise levels.

Speaking of the bearing, to clear it up right now; this bearing is in no way a “Fluid Dynamic” or even “Hydro Dynamic” bearing. It is a closed oil shaft, filled with oil and sealed in a brass chamber. That does leave the fan less prone to leakage than a standard sleeve bearing, but many of the issues faced by a sleeve bearing are still faced with this design as their is no rifling on the shaft. Nor is the chamber completely filled with oil.

Next up, Xigmatek claims these fans have superb quietness & oustanding aerodynamic efficiency. I’d like to say right off that bat that they do have some really good airflow. That’s about it though, the fans themselves were not obnoxious but nothing about their sound profile was superb or outstanding and these fans lack static pressure in all regards.

Xigmatek specifically states on their website and on their product packaging that this fan is supposed to be under 17dB(A). That A at the end means this is an adjusted scale. Obviously their scale is adjusted to some very unrealistic levels as I use the industry standard for dB measurements. 1 Meter distance (adjusted) from fan to microphone, in a chamber that’s between 10 & 11dB. That takes a lot of work, but their marketing just seems like a number as it wouldn’t fall in line with what I measured, even if they measured at a distance of 2 meters away in a 8dB(A) chamber.

Xigmatek needs to fix this “problem” immediately before I recommend this product, as I will not accept this level of false advertising on a product. It’s deplorable and needs to be shunned before it begins.

I would like to take a moment to talk on the good points of this fan though, as it’s got some phenomenal airflow and the sound levels for it’s airflow vales are outstanding as well. 87 CFM @ 27dB(A), which is the worst case scenario from 5 fans, is just down right great. Zaward had a similar level of Airflow to Noise ratio, but it’s impressive to see that level at the high end (in terms of airflow.) As much as some enthusiasts appreciate silence, you cannot always have that “whisper quiet” silence in a high end machine. If these fans were advertised with the sound pressure the OEM rated them at, then I would have no problem making the recommendation on these guys as that performance is outstanding.

As a bit of a side note, Xigmatek says you can use these fans with heatsinks, which is true. Their cooling efficiency will be significantly impacted though. As that low static pressure will hold them back greatly. That’s something you can see with our NZXT Havik 140 testing. That’s why I always advocate to our readers to get fans with a decent pressure rating for their heatsink(s), as these low pressure fans just will not cut it.

At the end of the day, I don’t have a lot to say about Xigmatek’s offerings except that I believe they should work on honesty before they introduce more new products to the market. As those noise levels are completely unrealistic and far off from measured values.

Legit Bottom Line: Xigmatek’s XAF Series of 140mm fans produce a ton of airflow, but come no where near close to matching their suggested noise levels. 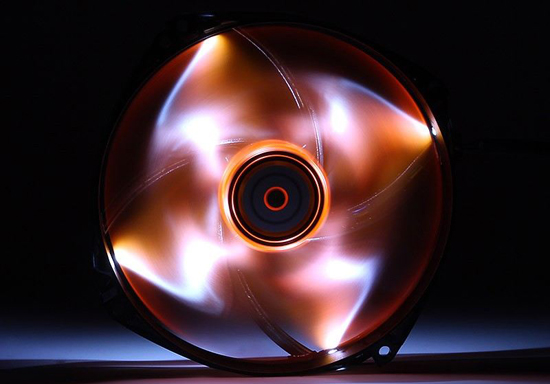